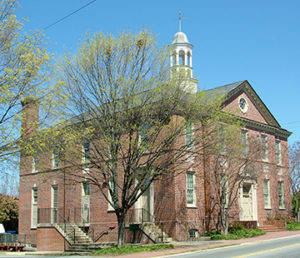 The Inter-Faith Council for Social Services is getting ready to embark on a year-long project to demolish its current building on Main Street in Carrboro to make way for a new $5.5 million facility.

But while the construction is going on, the IFC staff still need somewhere to work and deliver the services the non-profit has provided in the community for many years.

Robert Dowling said last week that the non-profit had gathered a group in hopes of finding a temporary location.

“We felt certain we would find somebody who could find space for our pantry and the IFC offices,” he said. “Unfortunately, that was not to be. And so, this is really our last shot: moving into the old town hall.”

Dowling, who is co-chairing the IFC fundraising campaign to pay for the new facility in Carrboro, was speaking to the Chapel Hill Town Council as that board considered the request from the non-profit to move staff into the second floor of the Historic Town Hall. The IFC currently uses the basement and first floor of the facility for its community kitchen operation, and it had previously used the second floor for its men’s shelter. That operation was moved out to a new facility on Martin Luther King Junior Boulevard in 2015.

The town does not charge IFC rent or utility costs for its current space usage and did not charge for those costs when the organization previously utilized the additional space before 2015.

Former Chapel Hill Mayor Kevin Foy, who is co-chairing the current fundraising effort along with Dowling, said this assistance from the town was important for the non-profit to continue serving the area.

“The subsidy for utilities and maintenance has been going on for the last 30 years,” Foy said, “and we appreciate your considering continuing that.”

Councilmember Donna Bell said that not charging for rent or utilities showed the town’s efforts to help meet the needs of those in the community who access the IFC.

“This has been part of how we have helped support these services in our community,” Bell said. “And this feels like a continuation of that support as we’re looking toward their move to their permanent space in Carrboro.”

Councilors Hongbin Gu and Nancy Oates asked town manager Maurice Jones about the towns costs in allowing the IFC to expand operations in historic town hall for roughly one year before the Carrboro facility is ready.

Jones said that, in addition to the town covering the rent and utility fees, there were some renovation costs that were going to have to be covered for the IFC to be able to move in to the space, including a fire door and some painting and flooring work. Jones said the town and IFC had agreed to split those costs, with the non-profit contributing between $6,000 and $8,000. But councilmember Karen Stegman asked that the town cover all of those costs.

“I personally would rather see their very limited budget go toward serving our community,” Stegman said.

The council ultimately unanimously voted to allow the IFC staff to utilize the second floor of Historic Town Hall and that the town would cover all of the renovation costs.

Mayor Pam Hemminger noted that the town was not currently renting out the space, so the town was not losing income in this agreement, and that a task force had looked at possible future uses for the building, but no plans were immediately in place.

“We have it in the debt fund at some point in time, but it was not brought forward yet,” Hemminger said. “So, we don’t have any immediate plans. That’s not to say a year from now, when they’re done, that there couldn’t be something else that happens there as well.”

IFC executive director Jackie Jenks said in an email that the current Carrboro offices will close March 25 through 29 to pack and move and the organization is planning to re-open on April 1 in Chapel Hill.

You can find more details about the logistics of the move and when donation drop offs can occur during that time here.