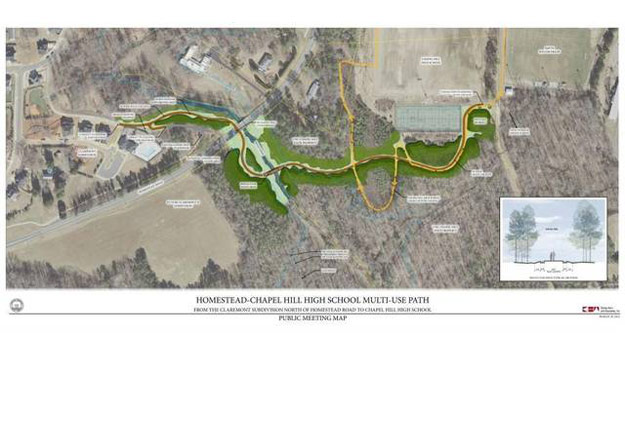 The Carrboro Board of Aldermen had a familiar item on their agenda during Tuesday’s meeting: the multi-use path near Chapel Hill High.

The paved greenway, which is meant to improve bicycle and pedestrian access across Homestead Road and to the school, is nearing the end of construction after two years. The Board of Aldermen voted Tuesday night to allocate nearly $39,000 more to finish it.

“The Greenway Commission did not see this item,” she said. “They haven’t discussed it, and I believe this should come before our advisory board of community representatives before we go forth.”

Gist said she supported Haven-O’Donnell’s reasons, but had her own for voting no.

“I was going to vote against this because I’ve voted against it all along,” said Gist. “I don’t like it and hundreds of people don’t like it, so I’m voting against it.”

Both Alderwomen voted to allow the project to begin in May 2016 while staff were reviewing options for the controversial portion of the greenway near the school, but voted against its completion when it came back before the board one month later. The path faced complaints from community members about the area being susceptible to flooding from Bolin Creek and interference with Chapel Hill High’s cross country path.

Alderman Sammy Slade said waiting for the Greenway Commission to meet in September would bring further and unnecessary delays and costs to the community. He also voiced confusion over the opposing board members’ votes.

“This process has included participation by some of the members who are voting against it in favor of this [project],” said Slade, “so I find it contradictory to take a sustained position against this.”

Alderman Damon Seils said the board’s vote was not out of the ordinary.

“We get some items on the consent agenda where we’re asked to allocate some additional funds to complete a project that’s underway,” said Seils. “That happened with the Morgan Creek greenway; it happened with the Rogers Road sidewalk project, and we approved those without discussion.”

The multi-use path project is expected to be completed by the end of July.