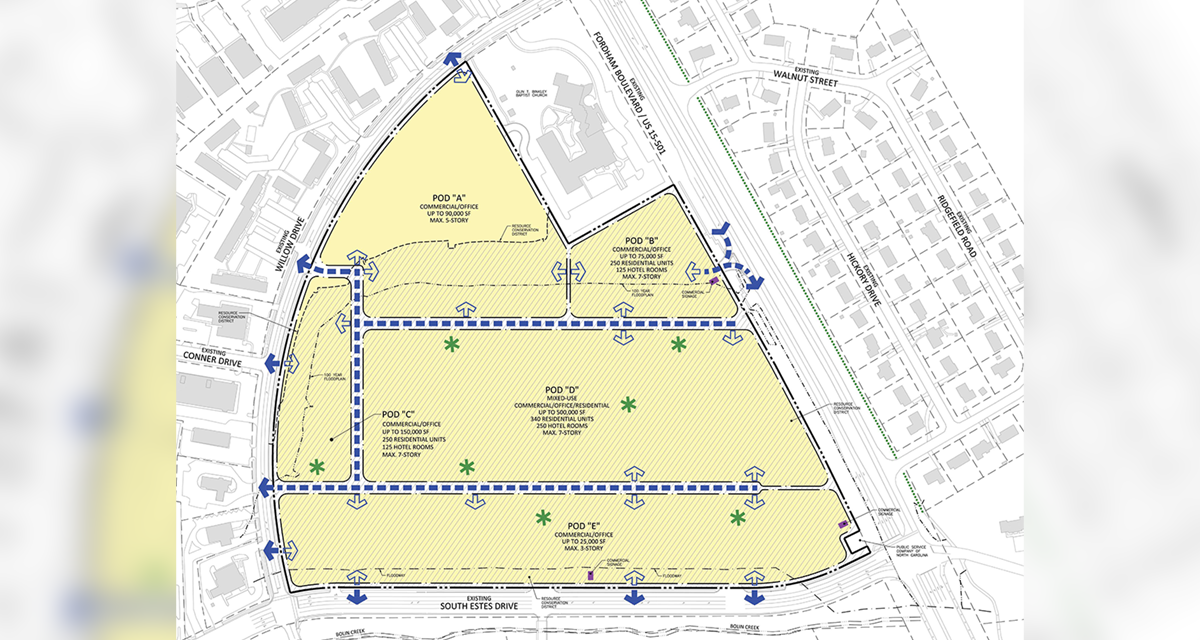 A concept plan has been submitted that would bring about major redevelopment to University Place mall in Chapel Hill.

The approximately 39-acre property has housed the mall since the 1970s. Two other buildings are located on the site, where Chapel Hill Tire, Harris Teeter and K&W Cafeteria are located, along with surface-level parking. Ram Realty, a branch of Ram Development, purchased the mall in late 2018 and announced plans this spring for a “multi-phase” effort to “modernize the property and create a true town center for Chapel Hill.”

The concept plan recently submitted to the Town of Chapel Hill calls for a portion of the existing mall to be removed and replaced with a “central gathering area and pedestrian access.” New structures are proposed for the site as well.

“Where new buildings are constructed, the intention is to bring these buildings closer to the surrounding street to be more compliant with the Town of Chapel Hill’s form-based standards,” according to the proposal.

Three-story commercial or office space could front Estes Drive with buildings reaching five to seven stories throughout the rest of the site. The proposal also calls for hotel and residential units in addition to the office space. The town has already been in discussion with Ram Realty on possibly locating the future Chapel Hill Police station on the site fronting Willow Drive. A parking deck could also be located on the Willow Drive side of the property.

The site is sure to be scrutinized for any potential development due to past flooding issues around the area. A traffic impact analysis would also be required, if the project were to move forward.

A concept plan is not a formal development application. But the town council and advisory boards can provide feedback to initial thoughts for development.

There is no timeline for the start of that review process on the town’s website.

WCHL moved its studios to University Place in October 2016.