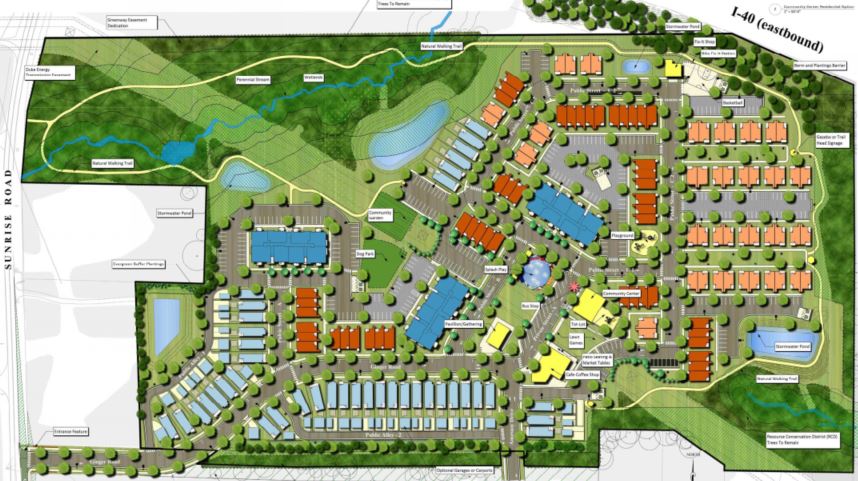 Affordable housing continues to be one of the top issues in the Chapel Hill community, with many pushing for years to improve and expand living options. Before it began its summer break, the Chapel Hill Town Council acted on several proposed housing developments, with even more planned in the coming years.

At its final meeting of the first half of 2020, the town council approved a conditional rezoning permit for the Weavers Grove community to be located off Sunrise Road in northern Chapel Hill. The approval means the Orange County Habitat for Humanity, the non-profit heading the project, can begin to find a developer for the affordable housing community.

The proposed community will include a total of 100 duplex and townhouse units that meet Chapel Hill’s criteria for affordable housing, with more than 100 other market rate units included too.

President of the Habitat for Humanity of Orange County Jennifer Player says while the affordable units are the main focus of her organization, the inclusion of townhouse units at market rate price are an important inclusion. She says since Habitat built Phoenix Place in 2010, the non-profit’s largest community in Chapel Hill that will be surpassed by Weavers Grove’s construction, there’s been a national shift to creating mixed-income models.

Now, with the zoning approved by the town council, Player says Habitat for Humanity can start focusing on implementing their design of building a community attractive to all Chapel Hill residents.

“We want to create a mixed-income neighborhood that isn’t [physically divided by] market rate homes and Habitat homes,” she says. “[We don’t want] people to come home every day from their jobs, drive to their homes and they never interact with others. So, we’re creating this community space, which we’re really proud of.”

The property off Sunrise Road has been targeted for years by groups, but neighbors and community members have voiced concerns about developing the wooded area. At Chapel Hill’s public hearing for Weavers Grove’s conditional zoning application, comments were made over stormwater management, traffic on the two-lane road, density of units and the property’s proximity to Interstate 40.

Town staff addressed some of the topics in those comments at the council’s June 24 meeting before council members unanimously approved the property’s rezoning. Players says Habitat for Humanity has worked to find solutions for most of the public’s concerns and went through Chapel Hill’s advisory boards to ensure the project met the town’s standards.

“If those were legitimate problems [that] we had not solved through our master plan,” says Player, “there’s no way these boards and the town council would have approved the project.”

Weavers Grove also was one of the affordable housing projects granted funding by the town council earlier in June. As part of the first funding cycle of a $10 million affordable housing bond approved by residents in 2018, Chapel Hill officials granted funding to four projects, including Weavers Grove which received $1.5 million in funding. Other projects include a 48-unit community on Merritt Mill Road by the non-profit CASA, the 100-unit mixed-income community proposed by the town government for Homestead Road and a duplex unit by Pee Wee Homes on Mitchell Lane.

Loyrn Clark, the director of Chapel Hill’s Housing and Community Office, says that action is a significant step toward development.

“One is on Jay Street, which is just outside of the Northside neighborhood,” she says. “We’ve got some property on Bennett Road that we’re looking at for an affordable housing development, as well as some other sites in the community. We’ll also continue to work with our housing development partners trying to increase housing options in the community – both rental and home-ownership.”

The Weavers Grove project has more planning and fundraising ahead, says Player, but Habitat for Humanity hopes for construction of units to be starting in 2022.

Photo via Habitat for Humanity of Orange County.