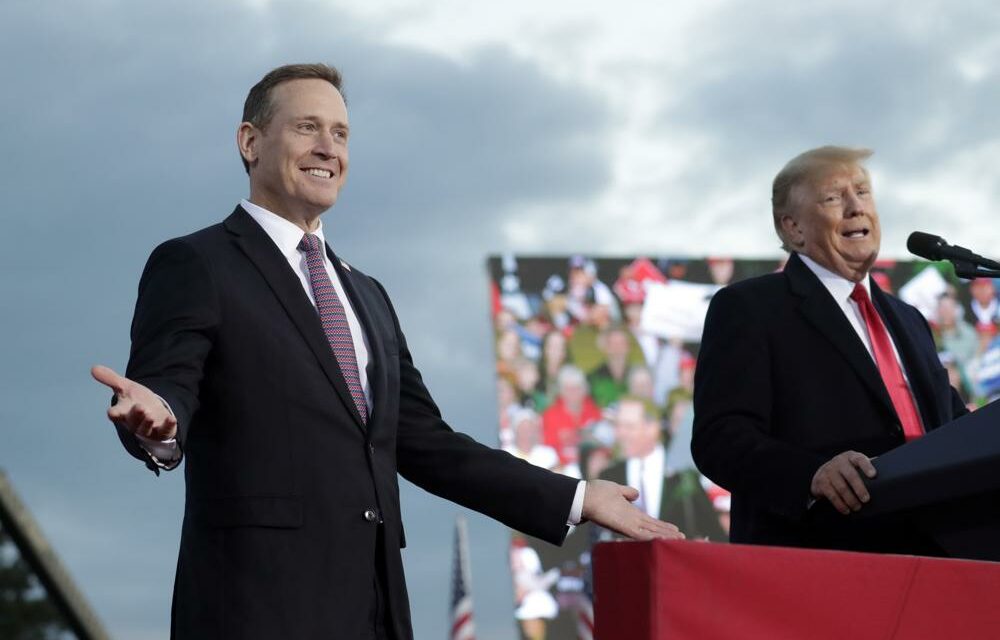 U.S. Senate hopeful Ted Budd is benefitting from President Donald Trump’s endorsement and a super PAC’s commitment to flood airwaves and mailboxes to help him as the May 17 Republican primary approaches. But rival and former Gov. Pat McCrory still has managed to stick close to Budd when it comes to head-to-head fundraising.

McCrory’s campaign said it raised $1.13 million through March 31, compared to $1.125 million raised by Budd., according to reports due Friday with the Federal Election Commission. McCrory also reported having more cash in his campaign coffers entering April — $2.2 million compared to $1.9 million for Budd.

Since early 2021 — before either candidate had entered the race — Budd has raised slightly more overall, FEC reports show. Budd has raised $4.24 million compared to $4.16 million for McCrory. Budd’s overall total contains $275,000 that he loaned his campaign.

McCrory — with a high name recognition from his time as governor from 2013 through in 2016 — had outraised Budd in the second quarter of 2021. As word of Trump’s June 2021 endorsement spread, Budd and McCrory’s numbers were about even in the third quarter, and Budd outraised McCrory by about $220,000 in the fourth quarter.

The candidates’ fundraising may shrink in comparison to Club for Growth Action, a super PAC that has said it plans to spend $14 million on activity in the North Carolina primary, praising Budd and attacking McCrory. An FEC filing by the group said it had already incurred $4.7 million in independent expenditures in the race through February. The super PAC and Budd’s campaign are barred from coordinating activities.

Among other Republican Senate hopefuls, former Rep. Mark Walker’s campaign totals remain well behind those of Budd and McCrory. He was also outraised in the first quarter by first-time political candidate Marjorie Eastman of Cary, FEC reports show.

The four candidates are among 14 seeking the GOP nomination. The top vote-getter must receive more than 30% of the vote to avoid a late July runoff with the second-place finisher.

Former state Supreme Court Chief Justice Cheri Beasley — the frontrunner for the Democratic nomination in an 11-candidate field — raised $3.66 million in the first quarter and had $5.1 million on hand entering April, according to her FEC report. Beasley’s campaign had announced those totals earlier in the month, showing she is the most prolific fundraiser in the field to date.

All of the candidates, including Libertarian Party nominee Shannon Bray, are seeking to succeed retiring GOP Sen. Richard Burr.

Budd has said Trump’s endorsement — which was on full display during a rally by the former president in Johnston County on April 9 — has contributed to his recent surge in polls.

McCrory has accused Washington-based Club for Growth of essentially buying support for Budd. The head of another Club for Growth affiliate that endorsed Budd calls him a “principled and proven conservative,” and said McCrory is too liberal.

The ex-governor and other primary rivals have also criticized Budd for declining so far to participate in televised debates. Eastman, McCrory and Walker will attend a live GOP debate Wednesday evening sponsored by Spectrum News 1, the cable channel said Monday.

Carolina Senate Fund, a super PAC supporting McCrory and opposing Budd, reported last week that it had collected $478,500 in the first quarter and had $752,000 entering April. In a separate filing, the organization said it had spent $117,000 on campaign mailers.