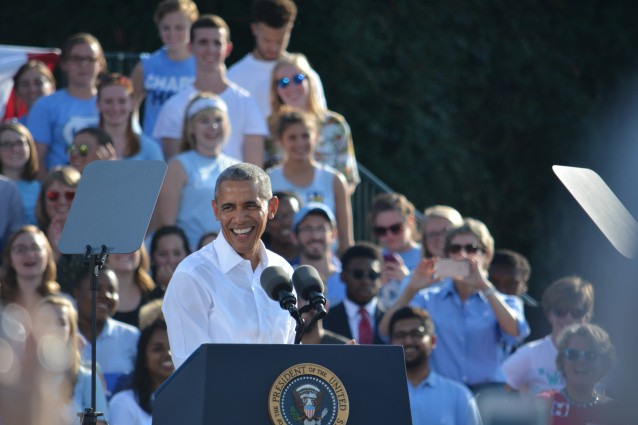 Thousands gathered onto Hooker Fields on an unseasonably warm day on the UNC campus on Wednesday to hear from President Barack Obama. With Election Day quickly approaching, Obama was campaigning for Democratic presidential nominee Hillary Clinton.

Obama said the 2016 presidential race might ultimately come down to how North Carolina votes.

“I hate to put a little pressure on you,” Obama said, “but the fate of the republic rests on your shoulders. The fate of the world is teetering, and you – North Carolina – are going to have to make sure that we push it in the right direction.”

“Because the guy that the Republicans nominated – even though a bunch of them knew they shouldn’t nominate him – the guy they nominated, who many of the Republicans he was running against said was a con artist and a know-nothing and wasn’t qualified to hold this office,” Obama said, “this guy is temperamentally unfit to be commander in chief, and he is not equipped to be president.”

Obama was visiting the Tar Heel state pushing the idea that North Carolina would give Clinton the electoral votes to secure the election.

“If Hillary wins North Carolina, she wins,” Obama said. “And that means that when I said the fate of the republic rests on you, I wasn’t joking.

“But that shouldn’t make you fearful; that should make you excited. It’s not often where you can move the arc of history. Don’t let that chance slip away. Young people here, it’s not often that you know your voice will have an impact. Don’t let it slip away; don’t give away your power.”

North Carolina has been called a “must-have state” if Trump is going to win the White House.

Obama said that, while his name was not on the ballot this year, the continuing of his work is on the ballot.

Obama took the stage after a string of local elected leaders and other Democratic hopefuls made their collective pitches to the crowd. Congressman David Price recalled the fight for civil rights during his time on the UNC campus. Former Chapel Hill Mayor Howard Lee asked attendees to continue making history around Chapel Hill by casting their ballot for Clinton to become the first female president. Democratic Senate candidate Deborah Ross told the crowd she was ready to take the “Tar Heel spirit” to Washington, D.C. And Democratic gubernatorial candidate Attorney General Roy Cooper asked for voter support to get North Carolina back to the southern progressive state it once was.

Trump and Clinton both have visits scheduled to North Carolina before Election Day.

Early voting runs through Saturday and Election Day is November 8.