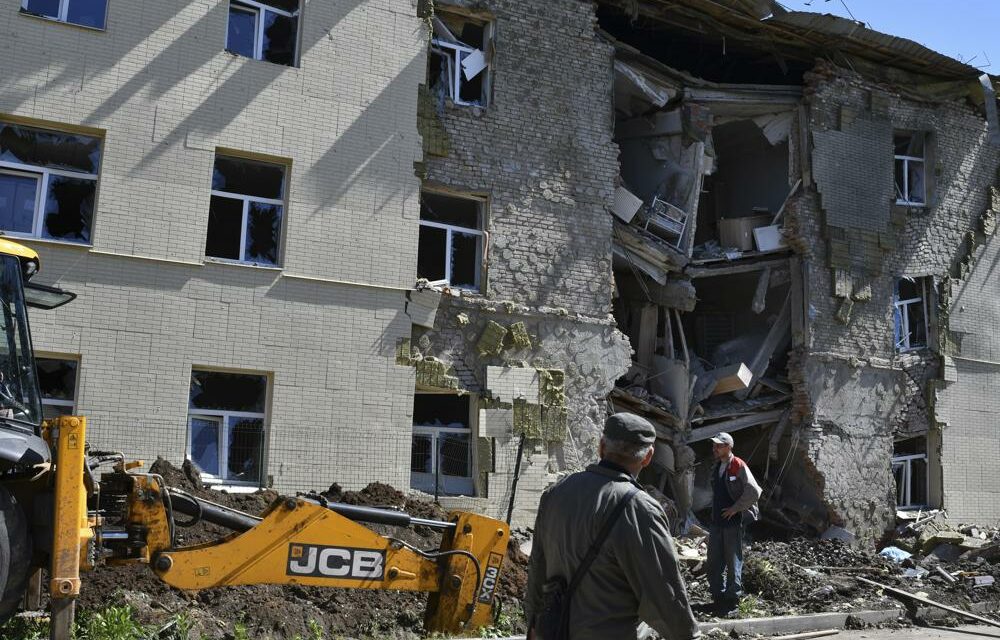 Russian forces pounded areas in Ukraine’s east on Thursday, including the last pocket of resistance in besieged Mariupol, as a war that is redrawing Europe’s security map pushed Russia’s neighbor Finland closer to joining NATO.

Even as the globe-shaking repercussions of the invasion spread, the conflict on the ground slogged on, with Ukraine’s military recapturing some towns and villages in the country’s northeast but acknowledging that Russian forces have seen “partial success” farther south in the eastern industrial heartland of the Donbas.

Finland’s president and prime minister said Thursday that the Nordic country should apply “without delay” for membership in the Western alliance, founded in part to counter the Soviet Union. The announcement means Finland is all but certain to apply to — and be accepted in — the military alliance whose members are committed to mutual defense, though the process could take months to complete. Neighboring Sweden could do the same within days.

Russia’s Foreign Ministry warned the country would take retaliatory “military-technical” steps and said the move would “inflict a serious damage to the Russian-Finnish relations as well as stability and security in Northern Europe.”

NATO’s support of Ukraine — particularly by supplying weapons — has been critical to Kyiv’s surprising success in stymieing Russia’s invasion, which began on Feb. 24. Many observers thought Moscow’s larger and better-armed military would be hard to stop, but the Ukrainians have bogged Russian troops down and thwarted their goal of overrunning the capital.

NATO members say they’re helping Ukraine defend itself but are eager to stress they are not directly involved in the war. But a top Russian official said the West’s supply of weapons and training posed a growing threat the fighting could spill into “an open and direct conflict between NATO and Russia.”

Dmitry Medvedev, the deputy head of Russia’s Security Council chaired by President Vladimir Putin, said that “there is always a risk of such conflict turning into a full-scale nuclear war, a scenario that will be catastrophic for all.”

Already the war has unleashed staggering destruction, killed thousands and forced millions from their homes, while shattering Europe’s sense of post-Cold War stability.

In the wake of their failure to take Kyiv, Russian forces pulled back and regrouped — and switched their focus to Ukraine’s eastern Donbas, a region where Moscow-backed separatists have fought Ukrainian troops for eight years. While Russia’s advance there has been slow, the general staff of Ukraine’s armed forces noted Thursday that Moscow has achieved a “partial success.”

Western officials say Russia has gained ground and taken some villages but has not managed to seize any cities.

Associated Press reporters heard explosions Thursday and saw plumes of smoke near the town of Bakhmut, an area of the Donbas that has seen heavy fighting. The Ukrainian military said that Russian forces were “storming” two villages near Bakhmut, but the source of the blasts wasn’t immediately clear.

Russian advances in the east follow weeks of their stubborn efforts to push through Ukrainian defenses in the Donbas. It’s unclear how significant the Russian gains have been.

But any gains in the east may have come at expense of territory elsewhere. Britain’s Defense Ministry said Russia’s focus on the Donbas had left its remaining troops around the northeastern city of Kharkiv vulnerable to counterattack from Ukrainian forces, which recaptured several towns and villages around the city.

Still, Russian rocket strikes Thursday killed one person and wounded three in a suburb of Kharkiv, the regional governor said. Kharkiv, Ukraine’s second-largest city, has suffered heavy Russian bombardment during the war as Russia sought to encircle it.

Fighting across the east has driven thousands of residents from their homes. Evacuees wiped away tears as they carried their children and belongings onto buses and vans to flee.

“It is terrible there now. We were leaving under missiles,” said Tatiana Kravstova, who left the town of Siversk with her 8-year-old son Artiom on a bus headed to the central city of Dnipro. “I don’t know where they were aiming at, but they were pointing at civilians.”

Meanwhile, Ukraine’s military also said Russian forces had fired artillery and grenade launchers at Ukrainian troops in the direction of Zaporizhzhia, which has been a refuge for civilians fleeing Mariupol, and attacked in the Chernihiv and Sumy regions to the north.

Overnight airstrikes in Chernihiv killed three people and wounded 12, according to local media citing emergency services. The regional governor said the strikes on the town of Novhorod-Siverskyi damaged a boarding school, dormitory and administrative building.

The military governor of the southern Ukrainian region of Kryvyi Rih accused Russia of using prohibited cluster bombs and phosphorus munitions. The claim could not immediately be verified. Ukraine has previously accused Russian forces of using such munitions in the Donbas, and Ukrainian authorities have launched investigations into their use.

In the southern port city of Mariupol, which has seen some of the worst destruction of the war, Ukraine offered to release Russian prisoners of war in exchange for the safe evacuation of badly wounded fighters trapped inside the Azovstal steel mill, the last redoubt of Ukrainian forces in the ruined city.

Ukrainian Deputy Prime Minister Iryna Vereshchuk said that negotiations were underway to release the wounded. She said there were different options, but “none of them is ideal.” Russia hasn’t confirmed any talks on the subject but seems unlikely to agree to any such swap as the release of the fighters would be a major morale boost for Ukraine.

Russia’s forces have taken control of the rest of the city, which they besieged for weeks, as residents ran short of food, water and medicine, though Petro Andriushchenko, an adviser to the Mariupol mayor, said Thursday that troops have resumed water supplies to two neighborhoods as a test.

“The occupiers turned Mariupol into a medieval ghetto,” said Mayor Vadym Boychenko in comments published by City Hall, as he called for a complete evacuation of the city.

Officials said in recent weeks that about 100,000 residents could still be trapped in Mariupol, which had a prewar population of over 400,000. Russian and Ukrainian authorities have periodically agreed to cease-fires to evacuate residents, and repeatedly blamed each other when those efforts failed.

Putin reaffirmed Russia’s determination to ensure territory in the Donbas held by Moscow-backed separatists never returns to Ukraine in a congratulatory message Thursday to the head of the self-proclaimed Luhansk People’s Republic.

On the eve of its invasion, Russia recognized the separatists’ claim to independence in Luhansk as well as in the other Donbas region of Donetsk. Moscow sought to justify its offensive by claiming, without evidence, that Ukraine was planning to attack areas held by separatists and that it intervened to protect people in those regions.

Putin also said Thursday that Russia would withstand tough Western sanctions — imposed in response to the invasion — though he said they were provoking a global economic crisis.

Speaking to officials during a meeting on the economy, Putin said that Western nations have been “driven by oversized political ambitions and Russophobia” to introduce the restrictions that “hurt their own economies and well-being of their citizens” as well as people in the world’s poorest countries.