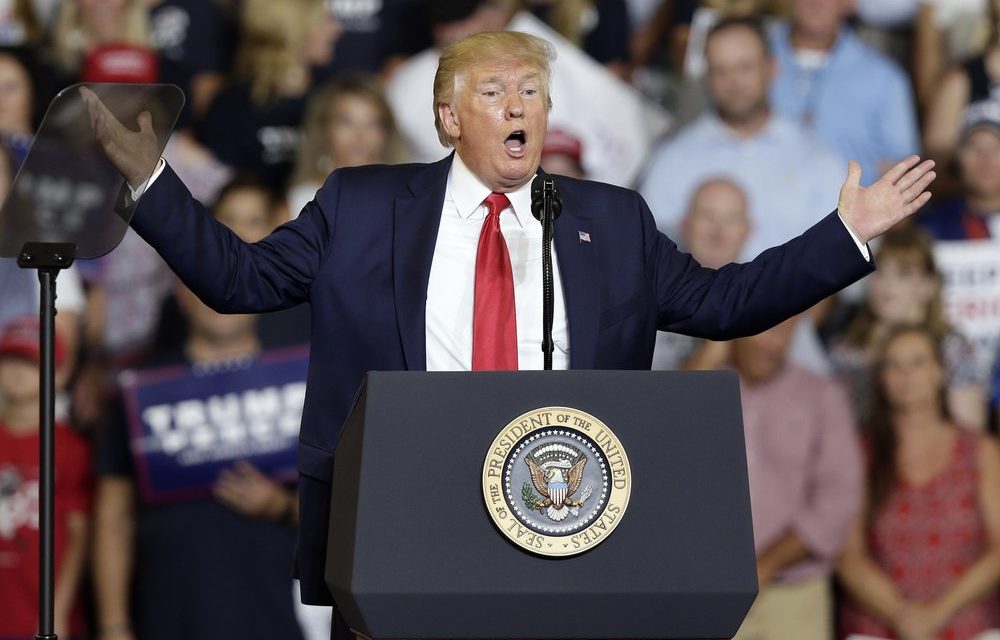 President Donald Trump’s approval rating is holding steady as the House presses forward with an impeachment probe that could imperil his presidency, according to a new poll from The Associated Press-NORC Center for Public Affairs Research. But there are warning signs in the survey for Trump.

Though Trump remains overwhelmingly popular within his own party, some Republicans have a critical view of the president’s honesty, his discipline and his respect for America’s democratic norms. Overall, 61% of Americans say Trump has little or no respect for the country’s democratic institutions and traditions, an issue that strikes at the heart of the impeachment inquiry focused in part on whether he sought a foreign government’s help for personal political gain.

Trump has fought back against the House probe with the same strategy that has buoyed him throughout the other investigations and controversies that have consumed his first three years in office: casting the investigations as politically motivated and repeatedly disparaging his opponents, often in bitingly personal terms. Republicans are so far sticking with him, with 85% saying they approve of Trump.

“The Democrats will not let the president do his job,” said Robert Little, a 73-year-old Republican from Kannapolis, North Carolina. “Ever since he’s been in office, he’s done a lot of good things for the United States, but the Democrats’ only agenda is to get rid of Trump.”

Overall, 42% of Americans approve of Trump’s handling of the job, in line with where he has been throughout his tenure. Just 7% of Democrats have a positive view of Trump as president.

Trump’s job approval rating and other markers in the survey underscore the deeply divisive nature of his presidency, with Republicans largely favoring his actions and Democrats overwhelmingly disapproving. As Trump eyes his reelection campaign, it suggests his path to victory will hinge on rallying higher turnout among his core supporters as opposed to persuading new voters to back his bid for a second term.

The biggest bright spot for Trump remains the economy, which has continued to grow despite warning signs of a downturn. Fifty-four percent of Americans approve of Trump’s handling of the economy, including a quarter of Democrats.

Trump inherited a growing economy from his predecessor, Barack Obama, and the trajectory has remained positive, with the unemployment rate hovering below 4%. But economists have warned that Trump’s push to levy tariffs on China puts economic gains at risk, and a majority of Americans, 55%, disapprove of Trump’s handling of trade negotiations with other countries.

Americans are more critical of Trump’s handling of foreign policy, with 59% disapproving of how he’s handling that issue. The public is also skeptical that Trump’s actions as president have been good for America’s standing in the world; 46% said his policies have done more harm than good, while 39% said they have had a more positive impact.

The poll was conducted almost entirely before Trump announced on Sunday that Islamic State leader Abu Bakr al-Baghdadi had been killed in a U.S. raid in Syria.

Trump was elected in 2016 with low marks from voters on an array of personal attributes, including honesty, and those assessments haven’t changed. Trump frequently repeats false statements and spreads conspiracy theories that have been debunked, including by members of his own administration.

More than half of Americans, 56%, said the word “honest” does not describe the president. Among Republicans, views are also mixed on Trump’s honesty: Just about half say “honest” describes Trump very or extremely well.

Even fewer Republicans have a positive view on Trump’s level of self-control, with just 39% saying “disciplined” is a very good way to describe the president, who often lashes out at critics and airs a myriad of grievances. Another 29% say it describes him moderately well, but about as many say it doesn’t describe him well.

“It wears you down, it wears you out,” said Bill Cathey, a 57-year-old independent from Charlotte, North Carolina. “And kind of dampens your spirit throughout the day.”