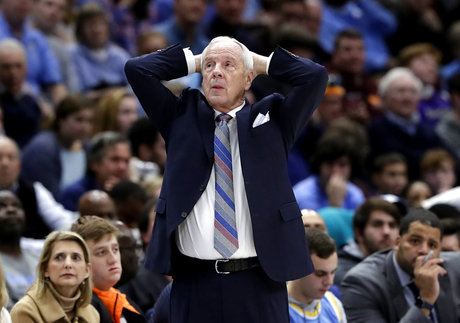 Is Carolina’s recruiting over? That’s a Precious question.

With the commitment of Charleston Southern shooting star Christian Keeling, inquiring minds want to know if Roy Williams is done recruiting for the 2019-20 season. That answer is probably yes — with an asterisk.

Keeling, a graduate transfer who averaged more than 18 points and drained just under 40 percent from 3-point range last season, fills an obvious shooting void left by the departure of Cam, Coby, Kenny and Luke.

With Seventh Woods transferring, another question is who will back up 5-star freshman Cole Anthony at point guard. The candidates are under-the-radar incoming freshman Jeremiah Francis, a 3-star recruit whose high school injuries dropped him down the rankings, and fellow incoming combo guard Anthony Harris.

Other candidates for playing time at the point are junior K.J. Smith, the Jet’s son, and of course Leaky Black — who saw some time running the offense before his high ankle sprain cost him six weeks of active duty. Black is a leading candidate to start on the wing beside senior Brandon Robinson.

One other 5-star still looming who has apparently shown some interest in the Tar Heels is 6-9 Nigerian Precious Achiuwa, who now lives in The Bronx, New York, but has a list of finalists from Carolina to Georgetown to Kansas to Memphis to UCLA. Making most of UNC’s recruiting noise is Bacot, who still Tweets that Precious is a possibility to join the Tar Heels when he announces his destination in late May.

Signing Achiuwa would vault Carolina above Duke for the top recruiting class in the nation, something the Heels haven’t had in more than 10 years. Memphis seems to be getting more chatter, largely because Carolina already has four big men on its roster. But Precious is listed as a small forward, and there is no incumbent starter at that position.

So just like a young Kevin Durant might have beaten out Marcus Ginyard, Danny Green and anyone else on the roster in 2007, Precious could complete one of the biggest front lines in the country alongside Brooks and Bacot, with Manley and Brandon Huffman as back-ups.

While it appears that Keeling’s commitment rounds out the 2020 roster, there is still at least one scholarship to give. And wouldn’t it be prescient if Precious claimed it.