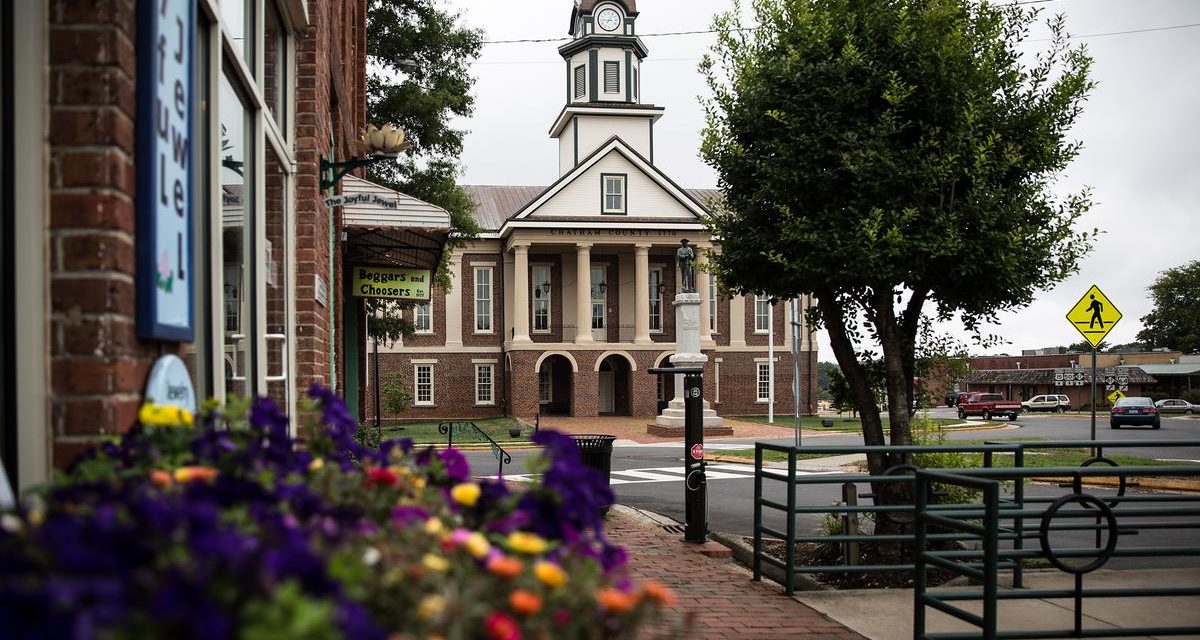 As aggressive expansion barrels on in Pittsboro, the cost of running the town’s government is surging.

To meet rising costs of infrastructure development and broaden the scope of town services, Pittsboro’s tentative budget for fiscal year 2021-22 proposes a 43% increase in total municipal spending as compared to the previous year.

The board of commissioners on Monday held its first of two public hearings to elucidate the 70-page budget document, which is available to the public on the town’s website, pittsboronc.gov. Town staff and the commissioners emphasized two primary highlights: property taxes are likely to stay the same next year, but utility rates will increase substantially.

The municipal government expects general fund spending — which covers such expenses as department allocations, town development services and contributed funds to non-profits (such as the new Boys & Girls Club and the Kiwanis Club) — to increase by about $1.8 million over last year, from $5.4 million to $7.2 million.

The general fund is also used to pay employee salaries, more of which the town will likely create in the next year. The budget proposes eight new jobs:

• A human resources director/risk manager, a public information officer, a purchasing and procurement officer, a grants writer/administrator, a deputy chief of police, a planning department project manager and a planner II. Also, the public utilities/public works director’s responsibilities will be divided in two, creating a new position.

Some jobs, those which fall under the town’s administration department, will be jointly funded by the town’s general fund and enterprise fund.

Despite increasing demands for tax-generated revenue, the budget proposes to maintain the current ad valorem tax rate of $0.4333 cents per $100 of property valuation. The town will still collect a substantial general fund revenue boost, however, following this year’s property revaluations. Pittsboro property values increased by almost 40% from 2017, and new residents moving into Chatham Park will add to the pool of tax payers.

“Improvements to our water quality and quantity as well as sewer quantity and quality are desperately needed,” the budget introduction says. “Among other needs, the main projects to be conducted over the next year are aimed at addressing our water quality concerns with PFAS in our raw water intake source, the Haw River, and increasing our sewer capacity …”

Alarming concentrations of PFAS, a family of carcinogenic per- and polyfluoroalkyl substances, are present in Pittsboro’s drinking water. A recent nationwide study by Consumer Reports identified the town as having the highest PFAS levels of any water supply in the U.S. Besides improving water quality, town staff and the board of commissioners are working to expand infrastructure to support new development before water and sewer allocations are pushed beyond capacity.

To achieve both goals, the commissioners are seeking to increase resident utility rates: if approved, water rates will go up by 45%, and sewer rates by 35%. The average user can expect to pay about $28 more per month or $332 more per year.

The rate hike is substantial, Kennedy said in Monday’s meeting, but it could have been worse.

“If you recall, at the budget retreat,” he said, “those numbers were 53 and 68 respectively.”

With some financial finagling — redistributing funds from other sources — town staff were able to improve those figures, Kennedy said. Still, the commissioners and Mayor Jim Nass were dismayed.

“I think it’s going to affect quite a few of our citizens here in town, this kind of increase,” Commissioner Jay Farrell said. “I’m really struggling with this right now.”

Others agreed but pointed out that rates have been constant for many years in advance of this proposed increase.

“I very much share the mayor’s and Commissioner Farrell’s concerns,” Commissioner John Bonitz said. “And yet, I’m also aware that I think it’s been since 2015 that we had an increase, and I don’t think that’s very well known in town … I think it is just so crucial that the public understand all of the work that has gone into these matters.”

Municipalities in North Carolina are only required to host one public hearing before approving annual budgets. Given the dramatic adjustment in this year’s proposal, though, the town will host a second hearing on May 24 during the board of commissioners’ regular meeting.

“We want people to feel confident in what they get as a service,” Kennedy said. “The reason we’re here is to serve our community and our public, and we want them to feel like they’re getting a good bang for their buck. Most government is accused of not doing such, but we want to be one of those rare birds where people say, ‘You now what, I don’t like playing taxes any more than the next guy. But I know that if I live in Pittsboro, they’re doing the right thing with my money …’”