One on One: Freedom Fighters and Hell Raisers

Who is the best North Carolina-based political columnist? 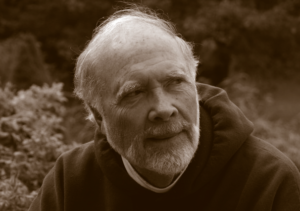 Lots of people would say, “Hal Crowther, if only he were still writing.” Crowther’s razor-sharp wit and biting commentary drew blood regularly in the “The Independent Weekly,” “The Spectator,” and other weekly independent newspapers in North Carolina’s major cities. Bill Moyers said it this way: “Hal Crowther hunts with live ammunition.”

There is good news and bad news for Crowther fans. He is still writing, still gaining comparisons to H.L. Menken’s strong and irreverent writing. But Crowther’s work now appears mostly in journals such as “The Oxford American,” not readily accessible by those of us in the masses. But we, too, can rejoice. Crowther has collected a sampling of his best work in a new book, “Freedom Fighters and Hell Raisers: A Gallery of Memorable Southerners,” published by Blair.

Some are better known than others, but all had a significant impact on Crowther. All are dead and Crowther, without funeralizing, sizes up their character and contributions. 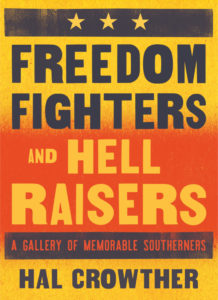 The book’s title comes from Molly Ivins, a Texan, and like Crowther, a biting commentator. She wrote, “I don’t have any children, so I’ve decided to claim all the future freedom-fighters and hell-raisers as my kin.”

About the poet and author of “Deliverance,” James Dickey, Crowther says he “raged out of Georgia like an unstable air mass, a sudden storm that blows the windows open, ” “an unruly, unreliable, impossible man who nevertheless produced some beloved poetry,” and “a Dixie Diogenes navigating by his own light, searching for honesty and virtue in a troubled land.”

“No one should be ashamed for failing to like him–only for failing to appreciate what he could do,” writes Crowther while explaining why he believes Dickey is one of poetry’s greats.

North Carolina’s U.S. Senator Jesse Helms was a frequent target of Crowther’s commentary and still is. He writes that Helms was “a huge old pit bull, useless and viscous, that sits in its own mess at the end of a tow-truck chain and snarls at everything that moves.”

He is not so hard on Alabama’s Governor George Wallace because Wallace, at the end recognized some of his errors. Crowther writes, “The most vivid symbol of its ancestral transgressions is gone–and he departed repentant, shriven and forgiven and ready for whatever grace the next place allows.”

Writing about the combat death of U.S. Marine Corps Lance Corporal Brian Anderson from Durham, Crowther mourns his loss and attacks the racial imbalance of sacrifice.

“There are star-spangled, pennant-waving white people here and elsewhere whose passions for the military and for college basketball–roughly equal–are untempered by the fact that their own children no longer participate.”

Crowther remembers the Duke professor and distinguished historian John Hope Franklin as I do. “A tall man of unforced dignity, Franklin was always courtly and affable, with a sly grin and an impish wit he unleashed in company he trusted…the precise opposite of the merry, light-minded obsequiousness once expected of African-Americans when white people were in the room.”

My favorite of Crowther’s essays is the last one in his book about blind musician Doc Watson. Neither blindness nor the loss of his beloved son, Merle, could keep him from using his music to bring people of all backgrounds and political persuasions to be moved by his songs and guitar playing.

We need Crowther’s freedom fighters and hell raisers, but the real heroes will be folks like Watson who bring us together.