One on One: Jim Crow Is Still Alive in North Carolina

Unbelievable when you think about it, how North Carolina maintained its segregated and discriminatory racial system for such a long time. The remnants of what is commonly called “Jim Crow” are still with us, a daily reminder of the horrors of the past. 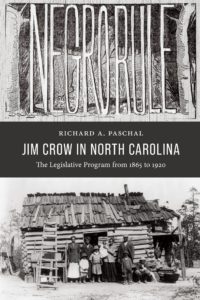 A new book, “Jim Crow in North Carolina: The Legislative Program from 1865 to 1920,” by Richard A. Paschal helps us understand the impact of Jim Crow on North Carolina. It catalogues and summarizes race-based laws passed by the General Assembly from the end of the Civil War until 1920.

Paschal, a Raleigh lawyer who holds a graduate degree in history, argues that it was not so much the laws on the books that brought about and maintained the segregated and oppressive system sometimes branded as “Jim Crow.” More important, he says, were the longstanding community standards and customs and the allocation of community resources by the dominating white power structure.

Paschal challenges the views of respected historians such as C. Vann Woodward, whose classic book, “The Strange Career of Jim Crow,” argued that, even under slavery, the two races had not been as divided as they were under the Jim Crow laws of the late 1890s and afterwards. Further, Woodward said that during Reconstruction, there was significant racial mixing in economic and political matters. The segregating of the races, he wrote, was a relative newcomer to the region.

The core of Paschal’s book is his lists of laws passed by the N. C. General Assembly from 1865 through 1920. The lists include numerous laws passed before the 1890s that restricted Blacks or discriminated against them.

While having separate schools for Blacks and whites was not controversial in the time after the Civil War, unequal funding was a continuing blight. For instance, local communities had the power and responsibility for establishing and funding schools, supposedly on an equal basis. But one method approved by the legislature provided that the white schools would be funded by taxes on white people and Black schools would be funded by taxes on “colored persons.” In 1885 the N. C. Supreme Court recognized the discrimination and struck down the plan.

Paschal asserts that many of the Jim Crow restrictions and much of the subjugation of Blacks were not solely “de jure,” that is, mandated by specific laws. Much of Jim Crow came about without specific legislation.

Even the most blatant result of the 1898 and 1900 white supremacy campaigns, the disenfranchisement of Blacks, was accomplished by implementation of a literacy requirement for voting. Paschal points out that a significant number of Blacks were literate. The law permitted literate Blacks to vote. But in its implementation, even the most literate Blacks failed the tests imposed by community voting officials who were, of course, all white.

With respect to jury participation by Blacks, Paschal found no racial restrictions in the law, but Blacks rarely were allowed to serve. “The lack of African Americans in the jury box worked to the detriment of the Black community and Black criminal defendants for decades. The racial incitement of the white supremacy campaigns created a chasm between legal text and the application and operation of the law, as local officials tilted the playing field decisively against the state’s African American population.”

In his conclusion Paschal writes, “In order to fully understand the shadow that Jim Crow continues to cast over us today, it is necessary to know how ostensibly democratic government at all levels and in all places used law to advance white interests while disadvantaging the interests of African Americans and other minorities.”

He might have added that in too many places it is still happening.