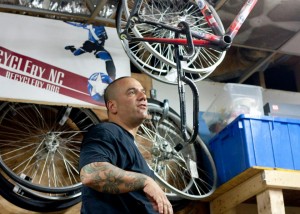 Rich Giorgi isn’t your average everyday bicycle enthusiast. As a co-founder of the completely non-profit and volunteer-staffed ReCYCLEry in Carrboro, Giorgi makes owning a piece of personal transportation as easy as putting it together yourself from scrap. Which isn’t always easy.

“The ReCYCLEry is really important to the community because it allows everyone access to a bicycle,” said Rachael Fiorentino, a fellow volunteer at the ReCYCLEry. “Even if you can’t afford one, you can come here and earn one.”

That spirit of earning a tangible result for effort and elbow grease is a constant at the ReCYCLEry, which functions as both a community hub and an accessible bike shop. According to Giorgi, one of the main goals of the ReCYCLEry is to eliminate any and all economic barriers to owning a bicycle. No membership fees, no charges for parts or labor and an atmosphere that fosters teaching just as much as learning allows folks from all walks of life to step inside the shop and start piecing together the bike they want.

Materials are plentiful, with everything from higher-end light framed bicycles to sturdy department-store mountain bikes found packed together tightly right outside the building in the “graveyard.” Roughly 30 percent of the bikes donated are used for scrap and parts to improve the other 70 percent, and everything in the yard is open and available to be picked up, used, or modified. Inside the shop, shelves of parts lie waiting to be put to good use.

Every part of the bike is used or recycled, save for items subject to decay and mold, such as rubber handgrips and seats. Bent frames and destroyed chains are sent to clean metal recycling shop, and rubber tires past their prime are sent to be ground up and become part of playgrounds. But recycled materials aren’t the ReCYCLEry’s only connection to younger members of the community.

“We started the idea of the ReCYCLEry in 2000 with the idea that connecting bicycles to children would give them more of a chance to interact in their community in a healthy way,” said Giorgi. Focus on providing not only an opportunity to learn valuable skills and earn a bicycle, but also to build on that foundation of positive experiences with riding groups – along with continued support and friendship across multiple age groups and backgrounds – has resulted in the ReCYCLEry being given the affectionate nickname “The Island of Misfit Toys.” Helping younger bicycle enthusiasts grow as cyclists and as people gives Rich Giorgi a certain sense of satisfaction, and that’s a large part of what makes him this week’s Hometown Hero.

“When you fix a bicycle for a child, when you see them attain something they haven’t attained previously and ride away on something that’s tactile and palpable, when they can see the results at the end of the day, it’s an awesome feeling.”

You can find more information about the ReCYCLEry on their website.

Special thanks to Nic Beery for his short documentary “The ReCYCLEry: The Island of Misfit Toys.”