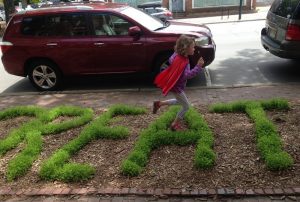 Messages written in flowers doesn’t have to be confined to Alice’s Wonderland or the pages of a fantasy novel. This week’s WCHL Hometown Hero, Carter Hubbard, began the “Florafitti” project, which brings words of inspiration and simple wisdom to life in the public spaces of Chapel Hill and Carrboro.

“It actually came as a result of sort of a design challenge,” said Hubbard. “I had a piece that I wanted to cast a shadow of the word on the floor, and when I got in there I felt the piece – the ambient light – was too bright. So they wonderfully allowed me to haul dirt in and I thought ‘hey, we could grow that!’”

Volunteers for the Florafitti project plant seeds during the winter that spring up into living words once the weather warms up.

“It was meant to be a secret, then a surprise,” said Hubbard. “The first year it was. Then, after that, people were like ‘hey wait, we want more of that!’ It’s evolved, and this year I’ve partnered with Josephus Thompson of the Poetry Project and Poetry Café.” 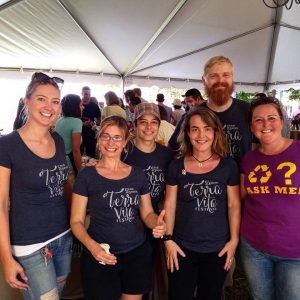 Working with teams from the North Carolina Art Therapy Institute, Hubbard and Thompson have lead workshops in spoken word poetry centering on the word “seed.” The growing process of seeds, the transition from latent potential to fully realized beauty, pairs well with the concepts of Florafitti.

“Everyone in the workshop planted a word that’s significant to either their group or solo piece,” said Hubbard. “From there, the word comes up, and they got a chance to perform around their particular word.”

Additional words have been planted in around 45 locations all around Chapel Hill and Carrboro as a place-making project, a way to engage the community.

“I’ve watched runners run by on Franklin Street trying to look at the words and read them, so one year I wrote ‘run faster,’” said Hubbard. “They respond to the area around where they’re planted. The library’s mission words are actually planted outside the library. What happens at the Community Center in Chapel Hill is reflected in the word ‘fair.’ Carrboro’s famous ‘feel free,’ you can find that as well.”

The motto presented by Florafitti is “bringing words to life and life to words.” Through visibility, grassroots community engagement and an element of surprise, the Florafitti project has captured many hearts and minds in the Chapelboro community.

“It’s been really amazing watching people work together,” said Hubbard. “Seeing amazing people of the Art Therapy Institute … It’s something that I hope to expand into other parts of Orange County, as well as different age groups.”