Primary elections are over, spring has come, we’ve sprung forward an hour, and it is time for me to suggest books for you to consider for the new season’s reading.

Memories and recipes for family meals, how a basketball game broke the rigid rules of segregation long before the 1960s, a primer on our state’s favorite food, traveling along our creeks and rivers where they meet the tidewaters, following the rise of the state’s Republicans through the life of a former governor, and a long-awaited new literary thriller from a best-selling author. 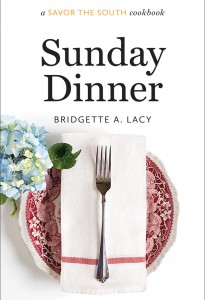 In “Sunday Dinner,” a “Savor the South” cookbook, Raleigh journalist Bridgette Lacy, shares her memories of Sunday dinners at her grandparents’ house in Lynchburg, Va., sitting down with “parents, aunts and uncles, siblings, and cousins to a meal of fried chicken, potato salad, green beans, and yeast rolls.” Lacy shares these memories along with heaping helpings of simple recipes from her family and friends, including Grandma’s Fried Chicken, Mama’s Meaty Crab Cakes, and Papa’s Picnic Ham with Jack Daniels and Cloves.

(Lacy will talk about her book on UNC-TV’s North Carolina Bookwatch at noon on Sunday, March 27, and at 5 p.m. on Thursday, March 31.) 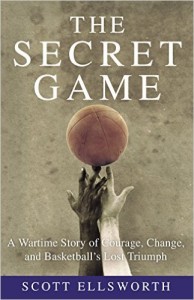 The Secret Game: A Wartime Story of Courage, Change, and Basketball’s Lost Triumph (via Little, Brown and Company)

A basketball game in Durham in 1944 had to be played in secret. Now that secret story is out and told movingly by Scott Ellsworth in “The Secret Game: A Wartime Story of Courage, Change, and Basketball’s Lost Triumph.” This was a game between a black college team, the Eagles from North Carolina College for Negroes, now North Carolina Central, and an all-white team from Duke in 1944. It flaunted the racial norms of the times and is part of a story that changed basketball and the country. And what a story, full of characters like basketball’s inventor James Naismith, legendary University of Kansas coach Phog Allen, Adolph Hitler at the 1936 Olympics, World War II, North Carolina Central’s founder Dr. James Shepard, and the book’s central character, Eagles coach McLendon. (April 3, 7)

Barbecue expert and scholar of southern culture, John Shelton Reed, strikes again. The co-author of “Holy Smoke,” the comprehensive and authoritative book about North Carolina barbecue, brings us a new and smaller book called simply “Barbecue.” One reviewer writes that Reed “has distilled in this little cookbook the essence of his barbecue knowledge.” Legendary Chapel Hill chef Bill Smith says the book was so entertaining, “it made me laugh out loud,” and he praises Reed’s “concise and clear recipes.” (April 10, 14)

No one has been more generous in sharing their love for North Carolina’s coastal waters than Chapel Hill’s Bland and Ann Cary Simpson. Their new book, “Little Rivers and Waterway Tales: A Carolinian’s Eastern Streams,” combines Bland’s lovely and informative narrative with Ann’s beautiful photography to show us the underappreciated beauty and rich heritage of our state’s waterways. (April 17, 21)

When a young Davidson College chemistry professor, Jim Martin, was first elected to the Mecklenburg County Commission in 1966, Republican officeholders were still a rarity in North Carolina. In “Catalyst: Jim Martin and the Rise of North Carolina Republicans,” John Hood shows how Martin’s election to Congress in 1972 and as governor in 1984 and again in 1988 contributed to growing Republican success. (April 24, 28)

After flashing onto the literary scene from his Salisbury hometown, about 10 years ago and writing four best selling thrillers in four years, John Hart took a long break, leaving a giant fan base missing his best-selling, award-winning literary thrillers. Now he is back with “Redemption Road,” a book that has already drawn praise from fellow author David Baldacci, who says the book’s “prologue is heart-wrenching and the chapters thereafter pull you in like matter to a black hole.” (May 3, 7)