My children like to make comparisons between the technology I had growing up and what they have today. In the course of a recent conversation on this topic, it occurred to me that, having been born in 1966, I have lived through the entire evolution of the personal computer and the internet.

The internet got its start in the 1960s with government funding through an organization called the Advanced Research Project Agency (ARPA), whose original network was called ARPANet. In time, the project was taken over by the Department of Defense, which changed the name to DARPANet. Advances in DARPANet continued until, in 1983, it was split into military and civilian networks. At first the civilian network was restricted to non-commercial uses such as research. These restrictions were eased over time, allowing the internet to weave its way into nearly every aspect of our lives.

In the fall of 1983, I started my senior year at State College Area High School, which is effectively the Chapel Hill High School of Pennsylvania. This was the first year that the school had a computer lab. We used Apple computers, which look substantially like the one shown here. 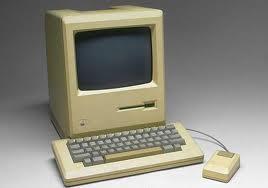 We learned word processing and computer programming in both BASIC and Pascal. It’s hard to convey to my children how fascinating this was for me, since I had never used a personal computer before.

In August of 1984, I headed to the University of Virginia. I was the only student I knew of who had their own PC. It was the size of a suitcase, weighed a ton, and had a 4” x 6” screen. It looked almost exactly like the one in this picture. 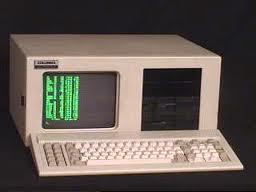 I also had a dot matrix printer so I could type up my homework on the word processor, print it out, and turn it in. This is commonplace now, but in 1984 for a student with atrocious handwriting such as mine, it was a godsend. I had only one computer game, called Lode Runner. My roommates and I played for hours. Here is a screenshot from the 1984 version. 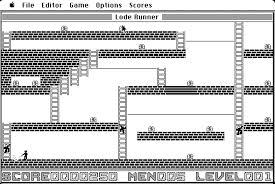 By 1984, most large universities had email capability. Therefore, I could send emails back and forth to my father, who worked at Penn State, using a 300 baud rate modem which looked like this. 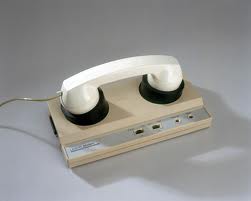 Today’s internet connection speeds can be millions of times faster. To use this old modem you would dial the phone, wait for the computer to pick up, and then, when you heard a loud, static-like noise, stick the hand set into the two plastic suction cups. The modem also provided access to the main frame computer on campus, allowing me to write computer programs to solve math and engineering problems, which saved me hours of time compared to doing them by hand. Prior to being able to communicate with the mainframe via a simple modem like this, computer programming was done with paper punch cards. Seriously. They looked like this.

A complicated computer program required whole boxes of them, which had to be fed into the computer’s card reader in the proper order. During the summer of 1982, I worked cleaning out labs at Penn State University and had to sort through and store many of these old punch card programs.

Looking back, I feel lucky to have been around for the beginning of the PC and internet revolutions. I think you appreciate the value of personal computers and the internet in a more meaningful way if you have memories of hand writing overhead transparencies and doing research in the Encyclopedia Britannica. Looking ahead, I wonder what my grandchildren will think about the technology my children have today. Time will tell.

If you have a comment, question, or personal story about your introduction to computers and the internet, use the interface below or send me an email at commonscience@chapelboro.com.