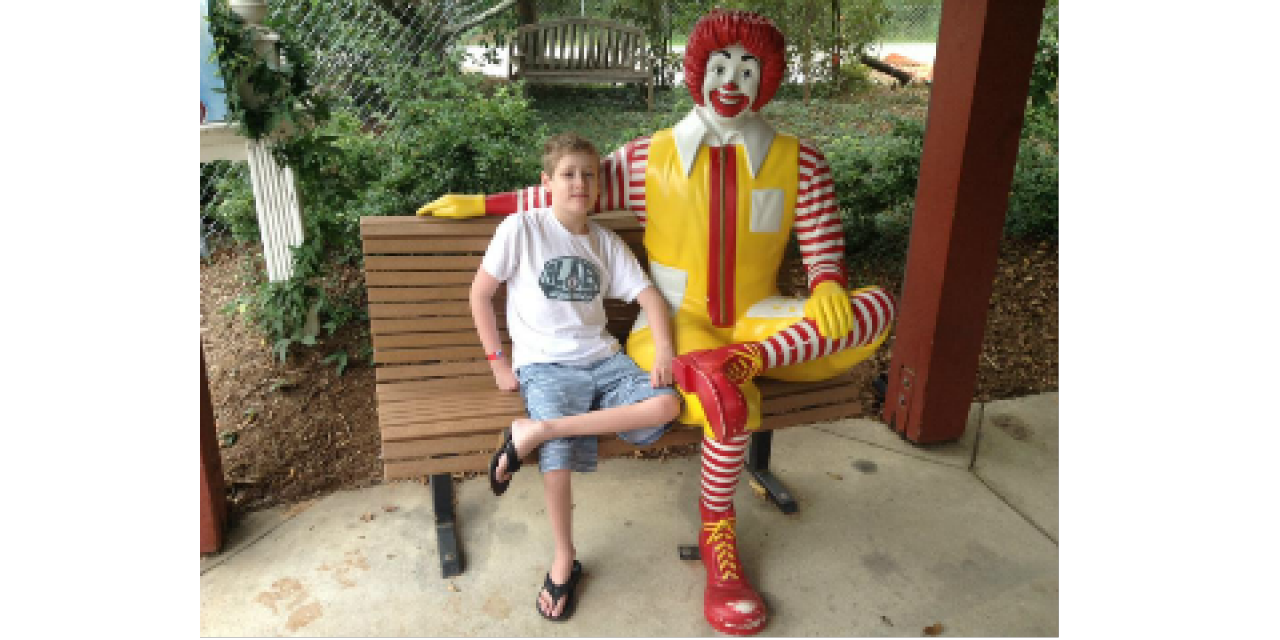 Every day, Doug Thompson wakes up long before the sun rises and drives 105 miles to work near Fayetteville, NC.  Meanwhile, Doug’s family sleeps comfortably in their two-bedroom apartment at the Ronald McDonald House of Chapel Hill.

They’re here because UNC Children’s Hospital is less than two miles away from the House. For Reece, fondly known as the “one lung wonder,” that closeness is vital. While being close to world-class healthcare is important, being close to his family is just as crucial.

Fifteen year-old Reece Thompson began treatment for cystic fibrosis, a progressive genetic disorder that affects around 30,000 people in the United States, when he was only days old. “I’m kind of special,” Reece declared recently.

The first time Reece and his family visited the House, back in 2008, things looked a lot different. Reece was just five years old with no function in his left lung, doctors decided he was better off without it. During their first stay at the House, the Thompsons would return from a long day at the hospital to find the familiar faces of new friends and a card game awaiting them in the kitchen.

“It’s good to sit down and talk about what everyone here is going through,” said Doug.  “While some of the circumstances may be different, we’re all kind of in the same boat.” In fact, during those early visits, the Thompsons made friends with whom they still stay in touch.

“You lift each other up,” said Leah, Reece’s mom. “If someone is having a bad day and you’re having a good day, they feed off of you and vice versa.”

Following successful removal of one of Reece’s lungs, his lung function recovered to 64 percent and eventually the Thompsons’ returned home.

As the years went by, however, Reece’s lung function dropped to 13 percent, which meant that he needed more than five liters of oxygen daily.  By September 2016, the Thompsons’ returned to the House in preparation for Reece’s upcoming transplant, which would replace his one remaining lung with a new donor lung. Because his organs have long since shifted to fill the space left by the diseased lung that was removed initially, Reece only has room for one lung.

While Reece was in the ICU, Doug and Leah were there by his bedside for more than 70 days.

“We had to make ourselves eat, make ourselves sleep, we were zombies!” said Leah.  “Our mindset now is totally different than at the beginning of this stay.”

Now, the family spends their evenings together at the House, enjoying the best outlook imaginable, and Reece’s 80 percent lung function.  “I feel great now that I’m at the House,” Reece said. “I’m breathing perfectly. And, because I can be with my mom and dad 24/7, I feel like I’m actually at home.”

“It’s great to be able to come here, especially since he’s out of the hospital now, to be able to be with him and to hang out all as a whole family together,” said Doug. “This is home.”

You can be a hero for Hero for Hope for children like Reece, the One Lung Wonder. For more information on how you can help keep families close, visit rmhch.org.

Carolina Love is a series of stories written and presented by Ronald McDonald House Chapel Hill.

CAROLINA LOVE: Celebrating the stories of families, volunteers and donors who have made the House a true home away from home over the last 30 years. For three decades, we have embraced every family that has come to our door, and each has a unique story. These are but a few of the many stories the House has been a part of since it opened. Carolina Love is a behind the scenes look at what we do, those we serve and those on whom we depend to help us carry out our mission of keeping families close.