Understanding the Opioid Crisis and Its Effects

(Editor’s note: this is the first of a five-part series of stories by the Chatham N+R about the opioid crisis, its impact on Chatham County and possible solutions.)

Goldston Mayor Tim Cunnup took the microphone to welcome the small crowd to the second edition of “It Started with a Script: Prescription Drug Misuse, Addiction and the Opioid Crisis.”

“I think there’s probably not any of us that have not been affected by it, through family or friends or acquaintances,” Cunnup said.

The 10 or so people in the audience, sitting in Goldston’s tiny Town Hall, listened.

“It is a very threatening situation,” Cunnup continued. “I’m looking forward to learning more about it.”

For the next two hours, law enforcement officials, health experts and community members shared about opioids, the effect of opioids on the body, the growing crisis across America and what it meant for Chatham County. That event, plus an earlier one in Pittsboro and a future edition in Siler City, is part of Chatham County’s fight-back. 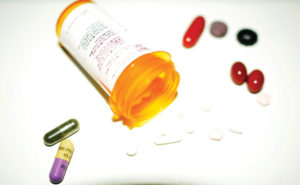 Opioids come in a variety of colors to attact a buyer. Cheap and easy to find, the overuse of the drugs have caused a crisis in the United States.

Government officials at all levels have been near unanimous in calling America’s vast addiction to opioid painkillers an “epidemic.” In October 2017, President Donald Trump officially declared it a public health emergency.

“As Americans, we cannot allow this to continue,” Trump said in his announcement. “It is time to liberate our communities from this scourge of drug addiction. We can be the generation that ends the opioid epidemic.”

The U.S. Department of Health & Human Services defines opioids as “a class of drugs that include the illegal drug heroin, synthetic opioids such as fentanyl and pain relievers availably legally by prescription, such as oxycodone (Oxycontin), hydrocodone (Vicodin), codeine, morphine and many others.” Legal opioids, often used as prescription pain medicine, can be helpful, the HHS says, but misuse can lead to dependence and addiction.

According to the U.S. Department of Health & Human Services, about 130 people or more die every day from opioid-related drug overdoses in America — a total of 47,600 in 2017. Also that year, more than two million people had an opioid use disorder, and 886,000 people used heroin. According to the White House, almost a third of all children removed from parents and placed in foster care are taken from from their families because of parental drug abuse.

On April 4, state Attorney General Josh Stein announced a new initiative called “More Powerful NC,” described in a press release as “a public education campaign to prevent and confront opioid addiction by empowering people to fight against addiction in their communities.” The government has partnered with healthcare providers Blue Cross & Blue Shield and Atrium, among others, for the effort.

“The opioid epidemic is ripping through North Carolina and leaving a trail of sick and grieving people in its wake,” Stein said in a statement. “More Powerful NC will raise awareness of addiction and hopefully spur action in local communities. I want people all over this state to appreciate that together, we are more powerful than this epidemic.” 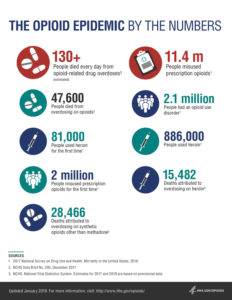 Chatham County is not immune to the epidemic.

At the Goldston meeting, Chatham County Sheriff Mike Roberson referenced a 2013 incident in which three people died in one night from cocaine use and 10 others went to the hospital. The cocaine was laced with fentanyl, a man-made painkiller that’s between 50 to 100 times more powerful than morphine. Fentanyl is among the most common drug involved in overdose deaths in the U.S., with the National Institutes of Health stating that 59 percent of opioid-related deaths in 2017 involved it.

While telling the story, Roberson added, “We’ve just seen the spike in the last couple years.”

Specific Chatham County numbers related to opioids are hard to define — Roberson said many Chatham residents will go to hospitals outside the county, skewing numbers — but a few concrete stats are available. As reported in the 2018 Chatham County Community Assessment, 5.7 percent of Chatham residents said they had a friend or family member that had misused prescription drugs in the past year, with opioids accounting for 74.7 percent of those drugs. The report also revealed that 17 percent of Chatham high school students said they had ever taken prescription pain medicine without a prescription or differently than prescribed, up from 11 percent in 2014.

The CCCA also stated that rates for opioid overdose deaths, hospitalization for newborns with drug withdrawal syndrome and prescription opioid pills per outpatient procedure were lower than the state’s average, and the county has seen a reduction in opioid prescriptions and an increase in individuals receiving treatment. However, the report also said that “the trend upwards” in overdose deaths and hospitalizations in the state has been “mirrored” in Chatham.

Casey Hilliard, the health policy analyst at the Chatham County Health Department, said at the Goldston event that there were six opioid overdose deaths in 2017 and five in the first half of 2018, with 85 percent of them involving fentanyl or heroin.

Speaking before the opioid awareness event in Goldston, Roberson emphasized that the crisis couldn’t be stopped by traditional methods.

It’s a problem that’s affected many different people from different backgrounds of life.

Most of the crowd at the Goldston event were white, middle-aged and older individuals. Not the normal stereotype of illegal drug use.

“I want you to look at each other,” Roberson said to that crowd. “This is what the people look like that have the problems. It’s in your houses, it’s in people’s houses that look like you.”

“It’s people you go to church with, people you work with,” he said. “I’ve seen it in my own occupation. Good people get in circumstances that get out of control.”

Later in the evening, Sgt. Ronnie Miller with the Chatham County Sheriff’s Office spoke about a group of people the department arrested last year that were “good families.”

“They were elderly couples that couldn’t afford their prescriptions,” Miller said. “They ran into an unfortunate situation. These pills aren’t safe to take in some manners. They are addictive, and that’s a real thing.”

Coming in Part Two next week: How did “The Problem” start? A look at three root causes.