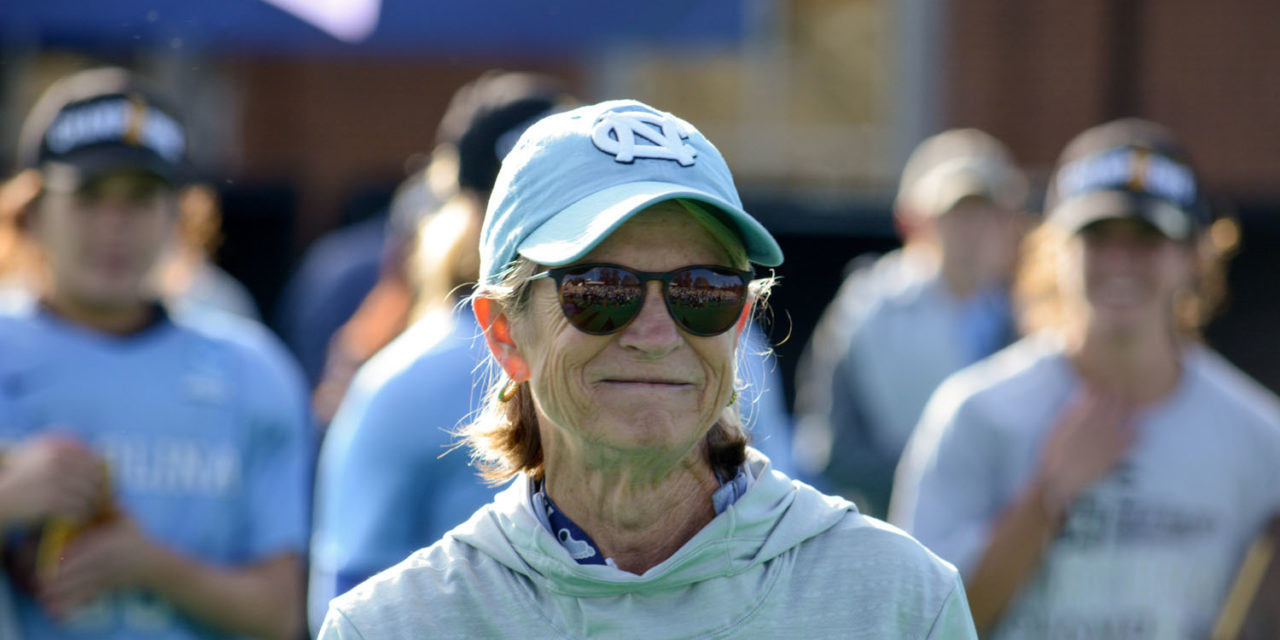 UNC field hockey head coach Karen Shelton knows it’s never easy to have an undefeated season, but she describes her team accomplishing the feat once again this season as a bit of a surprise.

“We graduated four starters and then lost another to an ACL injury,” Shelton says. “Five of the eleven [starters] is a pretty big hit and it was all our defensive backfield.”

The team adjusted to playing a younger backfield as the season progressed, which gave support to the Tar Heels’ high-powered offense. An early-season match against Princeton where UNC was losing tested the players’ ability to spark a comeback.

It was that game, Shelton says, where her team flashed its full potential.

“We were down three goals, but we made it 3-1 and there was five minutes to play,” she says. “I was thinking, ‘Let’s get one [goal] and then see if we can get it to overtime.’ But we scored three goals to win [the match] in a five-minute period. I think that’s when we started to think we had something pretty special.”

UNC senior forward and co-captain Marissa Creatore also points to the first match against Princeton as the point in the season where the players knew they could elevate their game.

“That game instilled that confidence in us that we are a force to be reckoned with,” says Creatore. “That was where I took a step back and said, ‘This team is relentless.’ There were multiple times this season we got scored on and I would go back to that game in my mind.”

After running the table in 2018, returning to the title game was the goal for the Tar Heels. They played a rematch against Princeton for the national championship, winning by a larger margin of 6-1. A second-straight undefeated season means UNC field hockey has won 46 straight games.

Creatore says players and coaches watched a lot of film from the Tar Heels’ September game against the Tigers to prepare for the title match, chiefly looking at how their own team had improved since that game.

“Looking back at that game,” she says, “we all watched our touches from earlier and [realized] we’d grown so much as a team. If anything, it did give us that extra motivation and we knew Princeton would be playing with a chip on their back because of the way we’d beaten them.”

Shelton says the coaching staff emphasized taking it one game at a time during the season and avoided putting pressure on maintaining the win streak. She credits her staff’s collective work of urging players to not become complacent as the season went on.

“Together, I think we did a good job of keeping the team humble and letting them see the things we must improve upon,” says Shelton. “We would mention, ‘look, you usually learn more from a loss, so it’s important we learn from these wins.’ And they knew, we had to fight for everything this year.”

While she can’t say whether this title means more than her seven others, Shelton admits seeing what it meant to this year’s senior class makes her proud.

“To watch the joy on the field when we win a national championship is so fun,” says Shelton. “To see the kids, their elation as they run out and hoist the trophy, that’s something that’s incredibly special. But I think the other thing that’s special is going undefeated at home for two years in a row. Now the season’s over, we can look back and think about how special that is.”

Shelton says she’s looking forward the offseason but won’t have much time to relax. She’s hitting the recruiting trail over Thanksgiving weekend to watch high school players she hopes to eventually bring to UNC and maybe add to her title collection.