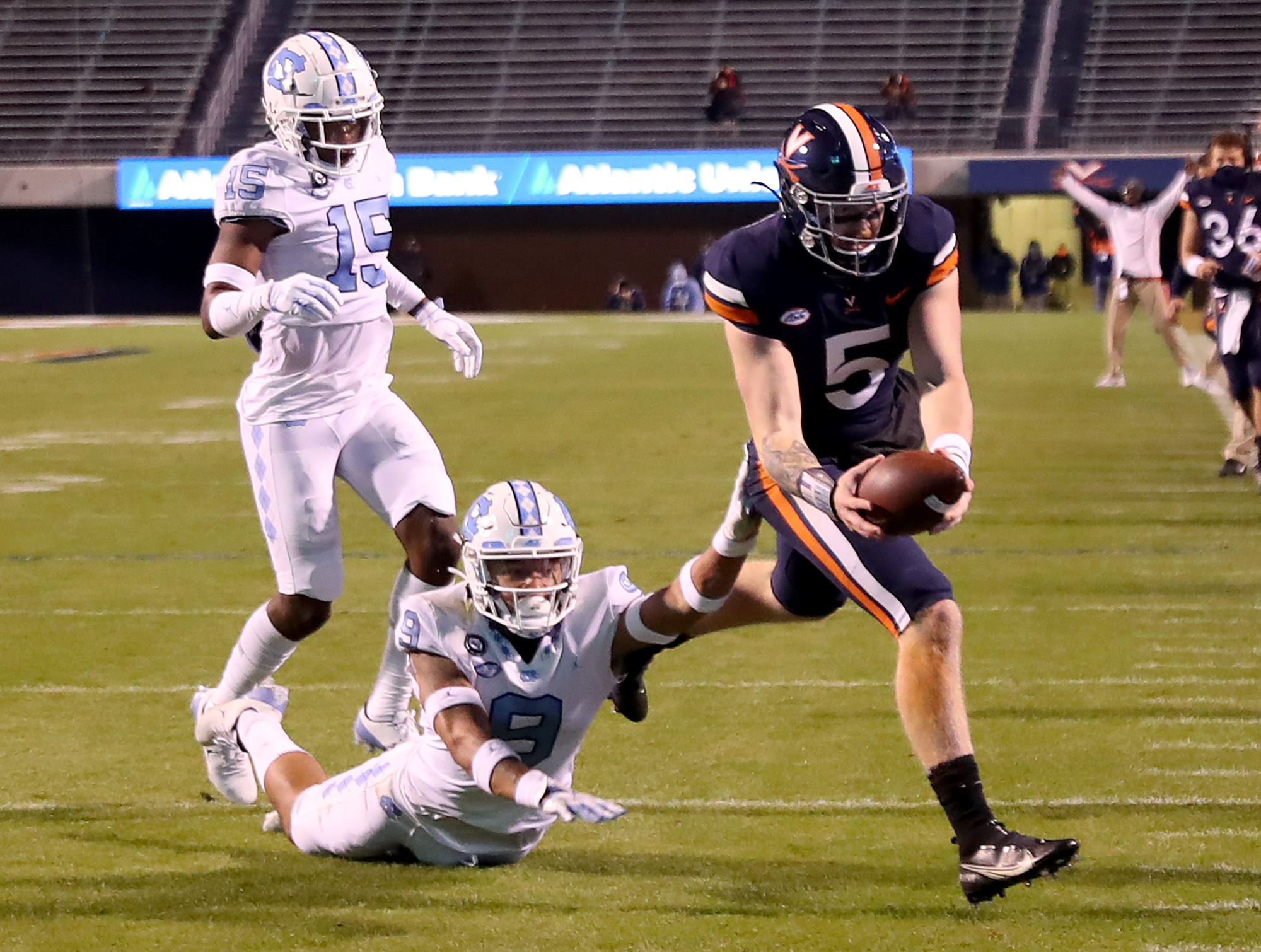 Once again, playing on the road in prime time proved to be too much to handle for the 15th-ranked UNC football team—which saw another thrilling fourth-quarter comeback attempt fall short in a stunning 44-41 loss to the Virginia Cavaliers.

Behind dual-threat quarterback Brennan Armstrong, the Cavaliers (2-4) snapped their four-game losing skid by completely overwhelming the UNC defense and taking advantage of some untimely mistakes by the Tar Heels.

That success running the ball—not to mention a pair of fumbles by the Tar Heels that each led to touchdowns soon after—helped the Cavaliers build a 41-20 lead in the closing minutes of the third quarter.

From there, the UNC offense shifted into overdrive behind quarterback Sam Howell—who amazingly led the Tar Heels on three consecutive touchdown drives in quick-strike fashion.

Needing just one defensive stop and a field goal in the last three minutes to tie, UNC then failed to stop Virginia from executing a fake punt on fourth down. That shut the door on what would have been a miraculous comeback for head coach Mack Brown’s Tar Heels and instead completed a shocking upset for Virginia.

“If we stop the fake punt—which we thought they might do, and we had we had him stopped on one side but didn’t contain the other side—we still have a chance to win the game,” Brown said afterwards. “And we think we’re gonna win the game. With one timeout left and plenty of time, at that point.”

With UNC constantly playing from behind, the running game was used sparingly in the second half—limiting the impact of tailbacks Javonte Williams and Michael Carter.

A holding penalty also cost the Tar Heels a touchdown early in the game, while a muffed punt and two unsportsmanlike conduct calls gave Virginia extra opportunities to score.

All those mistakes loomed large later on as the Cavaliers drained nine minutes off the clock in the fourth quarter with UNC seemingly allergic to stopping the run.

“This is not a complicated game,” the coach added. “It’s a simple game played by complicated people.”

It was a loss similar to the one the Tar Heels suffered at Florida State two weeks ago, with both games played on the road and at night. Both times UNC found themselves behind by more than 20 points in the second half and both times there was a chance to steal a victory.

The late game drama that filled last season has seeped its way into this season, and now the Tar Heels will have to go back to the drawing board and figure out how to correct the early issues that make the late drama necessary.

“I’m really proud that they didn’t give up,” Brown said. “They kept their confidence and put us back with a chance to win the game. Now, we just have to start winning those games.

The Tar Heels will look to defend the Victory Bell next weekend, when they take on the Duke Blue Devils in Durham in a game set to begin at noon.