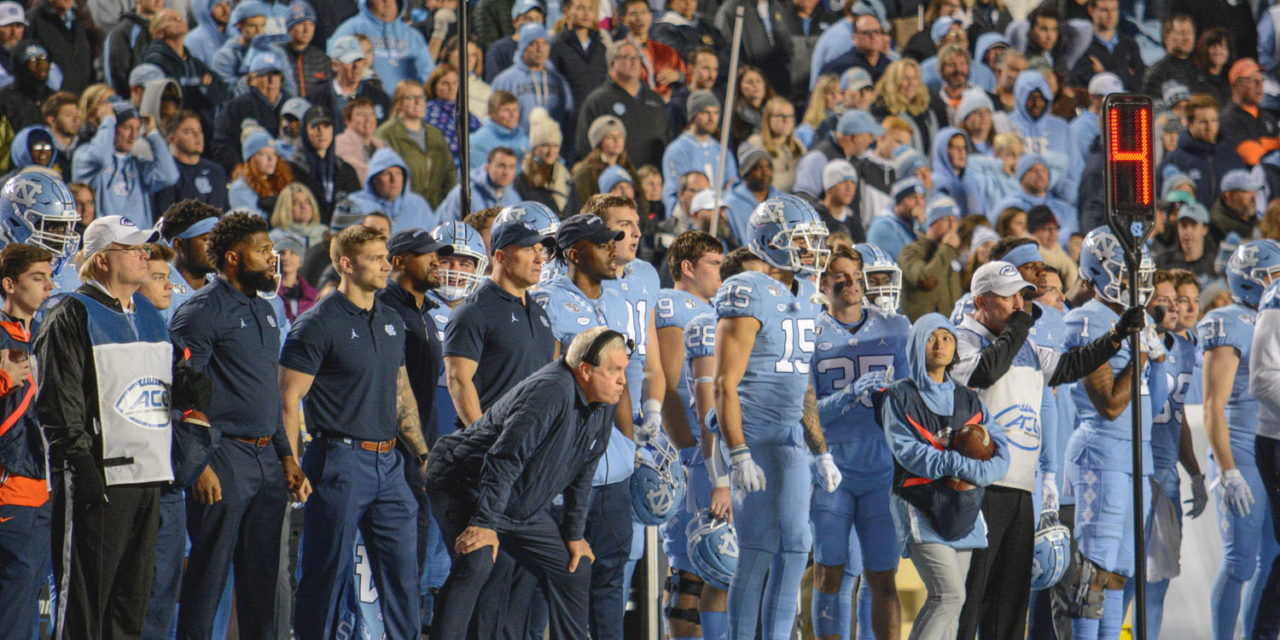 With a chance to claim sole possession of first place in the ACC Coastal Division on Saturday night at Kenan Stadium, the UNC football team had no answers for Virginia quarterback Bryce Perkins—who led the Cavaliers to a 38-31 victory over the Tar Heels.

In a game that produced the most points this rivalry has seen since 1973—and over 1,000 total yards of offense—it was Perkins and Virginia (6-3, 4-2 ACC)that were able to come out on top in the end.

Perkins ended the night having thrown for 378 yards and three touchdowns, while rushing for another 112 yards and two scores. His 490 total yards were the most in a single game ever recorded by a Virginia player.

All night long, the Cavaliers took advantage of a UNC defense which has struggled defending mobile quarterbacks and has dealt with numerous injuries in the secondary.

Despite the best efforts of Tar Heel freshman quarterback Sam Howell and sophomore receiver Dyami Brown, UNC was unable to get the win thanks in large part to the lackluster showing on defense.

On most days, Howell’s 353 passing yards and four touchdowns—not to mention Brown’s six catches for a career-high 202 yards and three scores–would be enough. Perkins was simply too much for head coach Mack Brown and company to handle on this particular night.

Much like the rest of its losses this season, UNC had multiple opportunities to try and tie or win in the final minutes.

Facing a 4th-and-5 on the Virginia 6-yard-line, Howell threw an incomplete pass intended for Beau Corrales in the endzone with five minutes left on the game clock. Then, after forcing Virginia to punt quickly on the next drive, Howell threw another incompletion on fourth down in Cavalier territory—sealing the victory for the visitors.

As a result, the Tar Heels fall back below .500 at 4-5 through nine games. UNC also drops to 3-3 in conference play, a full game behind Virginia in the Coastal Division standings with only two more conference matchups left on the schedule.

This loss doesn’t fully eliminate the Tar Heels from contention for the division, but it certainly makes it an uphill climb with plenty of help required from other teams.

With the resilience UNC has shown all year, it’s a safe bet that this Tar Heel squad will fight hard in each of their last three outings. What they’re really playing for from this point on, though, is winning at least two of those games to earn the program’s first bowl game appearance since 2016.

Brown wasn’t thinking about that on Saturday, however, instead focusing on what could have been if his team had been able to come up clutch in those missed late-game opportunities.

“These guys have played their guts out every week,” Brown said. “Every game has come down to the end. It’s been unbelievable. In fact, I thought we’d go into overtime tonight.

The Tar Heels will have next weekend off, before getting ready to face Pittsburgh in another critical ACC Coastal Division Showdown. UNC will make the trip to Heinz Field on Thursday, Nov. 14 for a prime time game on ESPN set to begin at 8 p.m.