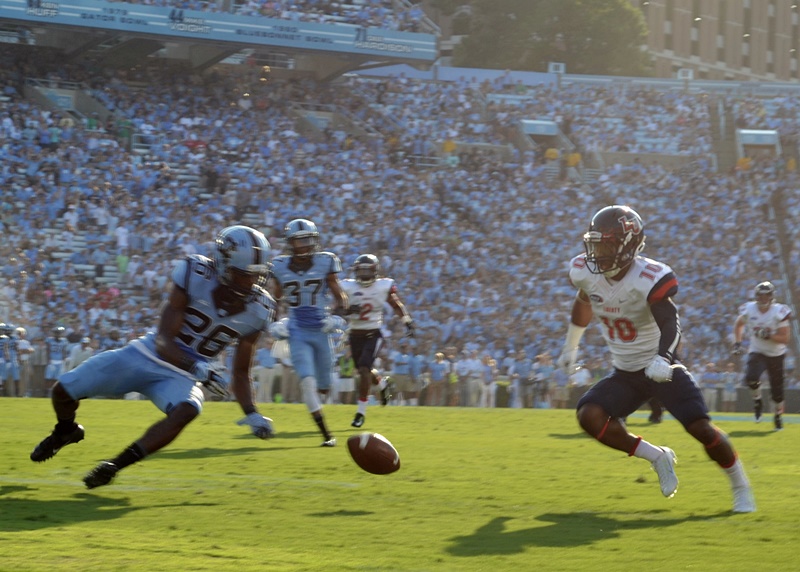 The No. 21 North Carolina football team enters Saturday hoping to start a season 2-0 for the first time under head coach Larry Fedora when the Tar Heels welcome the 1-0 San Diego State Aztecs to Kenan Stadium for an 8 p.m. kickoff under the lights.

The caliber of opponent is about to get a lot tougher Saturday for the Tar Heels.

Head coach Larry Fedora says SDSU, winners of nine out of their last eleven games, will present a much bigger threat to Carolina than Liberty in week one.

“I think it’s quite a bit of difference. I’m not taking anything away from Liberty. They’re a good football team, but SDSU is going to be a better football team in my opinion. I know coming into the season they have a lot of confidence and feel good with where they’re at,” Coach Fedora says. 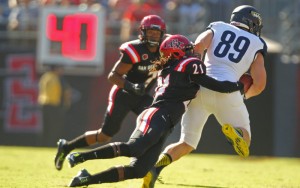 Junior linebacker Jeff Schoettmer says the infusion of talent from junior college transfers along with an explosive pro-style offense; make the Aztecs a formidable challenge for the defense.

“They got some talent. They have a bunch of junior college guys and are an older team. They’re explosive. They’re similar to Liberty with their offensive schemes, so that helps us. They got some speed, like to run the ball and they’re more pro style,” Schoettmer says.

One of the highlights in UNC’s week one win was the disruptiveness of the Carolina defense. The Tar Heels managed to recover four fumbles and force six turnovers against the Flames.

That’s a positive sign for defensive coordinator Vic Koenning’s boys. Last season, UNC recovered a mere seven fumbles all season and ranked No. 60 in the nation in turnovers gained. That’s a stat the Tar Heels appear well on their way to improving in 2014.

What’s the magic formula this year? Schoettmer credits a greater focus put on creating turnovers in the preseason.

The young UNC offensive line figures to receive their toughest exam to date from a chaotic, unconventional Aztec defense.

“They fly around and move around pretty good. They aren’t a big defensive line, but they’re moving constantly. There will be times in the game that they don’t put a hand on the ground on the defensive side of the ball. You won’t know who’s coming where. It’s unique in what they do. It will be difficult for an offensive line to figure those things out at the snap of the ball,” Coach Fedora says.

The Aztecs are 5-1 in their last six road or neutral site games. That stretch includes victories in three different time zones.

But UNC may have the upper hand in Chapel Hill. SDSU sports a lowly 2-10 overall record on the East coast.

Not wanting to test their luck two weekends on the trot, the Tar Heels will be looking for a faster start Saturday night than the sluggish beginnings to the Liberty contest. 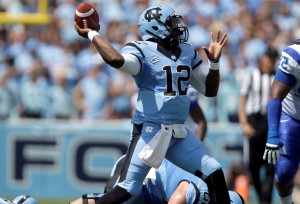 The man tasked with directing a cleaner performance out of the UNC offense will be starting junior quarterback Marquise Williams. Coach Fedora says Williams will receive the majority of snaps over redshirt freshman Mitch Trubisky going forward.

Williams says he wants to correct his mistakes from week one and get fired up to make amends in week two.

“I did pretty well. There are some things that I’m still going to correct. I got a little lackadaisical with the feet and some throws. It was the first game. It’s time to move on to SDSU,” Williams says.

The primetime Aztecs-Tar Heels 8 p.m. matchup in Kenan Stadium will be broadcast on 97.9 FM, WCHL and televised nationally on ESPNews.