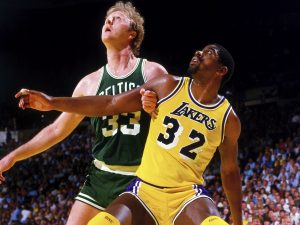 The NBA season isn’t quite over yet, thanks to ESPN.

If these NBA Finals weren’t enough for you, ESPN released one of its best 30 for 30 specials this week on the Celtics-Lakers rivalry, called Best of Enemies and running continuously on all ESPN platforms. The footage is grainy but doesn’t diminish the most compelling competition in pro basketball, dating back to the 1960s.

But this is more than hoops history. It shows how both storied franchises toiled in half-empty arenas when the NBA was a secondary sport to pro hockey and the playoffs were shown on tape-delayed TV. How Bill Russell and Elgin Baylor turned a slow white man’s game into racial drama in both cities in the height of forced school busing all over the country.

Boston is portrayed as the most racist city in a nation on edge and the Celtics-Lakers came to define the white versus black divide more than any other sub culture in America. Russell succeeded the brilliant and cagey Red Auerbach as the first black coach in professional pro sports and the Laker Girls were the first cheerleaders in the NBA, part of the famed Showtime teams under the ownership of Dr. Jerry Buss.

Did you know that the Celtics of Russell and Bob Cousy beat the Lakers of Baylor and Jerry West in six straight NBA Finals, and it wasn’t until Kareem Abdul-Jabbar and Magic Johnson arrived to finally end the Celtics’ dynasty continued by Larry Bird, Kevin McHale and Robert Parrish? I had forgotten that as a 20-year-old rookie, Magic Johnson replaced the injured Jabbar at center and scored 41 points in the decisive 1980 Finals game against Dr. J and the 76ers.

Former radio broadcaster and assistant coach Pat Riley got the LA job because no one else wanted it and how Magic’s $25 million, 25-year contract with the Lakers created dissension on the team and booing by home fans at the fabulous Forum. It’s all there in dramatic game tapes and interviews with the key figures years later.

The NBA of the 1980s was brutally physical when cheap shot fouls resulted in brawls on the court but rarely technicals and ejections. The players on both franchises openly talked trash to each other and taunted the other team in the newspapers. Still today, former combatants admit to a love-hate relationship as being among the Best of Enemies.

The three-part series is a riveting reminder of the raw old NBA. You don’t want to miss it.