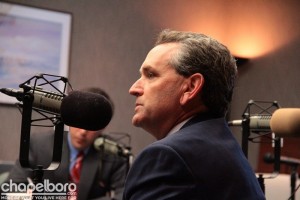 It’s the big money versus Bubba on the football coaching call.

If Carolina upsets State Saturday in the Tar Heels’ last game of the football season, maybe this will all be a moot point. But lately, the support for Larry Fedora has supposedly eroded from most major donors to UNC Athletics who have shown less hope and more apathy.

It will still be Bubba Cunningham’s call, and part of his job is listening to the people who invest their money, time and energy in his program. If it does come down to the numbers, those numbers favor Fedora having one more year to get his Tar Heels on track.

What if the big hitters pull their pledges and stop writing checks to the Rams Club and university, and what if season tickets drop to, say, 20,000 in 2019? Will Carolina lose enough money to make up for saving the 14 million-dollar buyout in Fedora’s contract? And can Bubba hire someone who will create so much excitement that season tickets will jump before the new guy ever coaches a game?

The answer to that from many people is the university has enough jack to make the change and cover the losses. UNC certainly proved that by paying to defend itself against the NCAA allegations. But Cunningham needs to spend his first dollar on a crystal ball.

Fast forward to after the 2021 season. Will Fedora still be the coach, having recovered from recruiting misses related to the scandal and unfair injuries over the last two seasons? Say he stays and Carolina makes it back to a couple of middle-range bowl games in the next three years? Will that be enough?

New coaches want big contracts and lots of security. Fedora himself got seven years because he was coming in when the academic mess was just getting started. And very few coaches take over a program and say, “We have a lot of good players here and we’re ready to challenge for the ACC championship.” More likely, they go the other way and say something like, “I can’t promise you how long it will take.” So, in comparison, where would Coach X be in three years?

Tough call for Bubba, the donors and UNC, indeed.