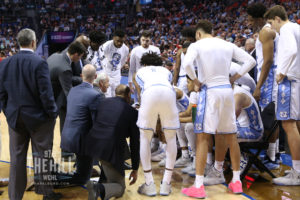 This Carolina team reminds me of some oldie-but-goodie Tar Heels.

Think of freshman point guard Phil Ford, selfless shooting guard John Kuester, talented wing Walter Davis and versatile big man Mitch Kupchak. That was a long time ago, but this 2019 version has grown into something similar.

Roy Williams acknowledged after Carolina defeated tough and talented Louisville in the ACC tournament quarterfinals that his current ball club has developed as well any he has had. Watching the Tar Heels take care of business in Charlotte took me back to some of Dean Smith’s vintage teams.

After a long season of practice and repetition, these Heels have honed their good habits into playing smart and unselfish basketball – team offense and team defense. Coby White is improving his NBA resume with every game, fast as a speeding bullet, able to bound to the basket or hit the outside shot. He shares the ball beautifully with Kenny Williams, Cam Johnson and Luke Maye while Garrison Brooks sets screens and defends the post with underrated success.

So tonight, the third-ranked Heels  put their experience and savvy on the line against the baby Blue Devils, who have Zion Williamson back in the lineup if not yet back in tip-top shape. ESPN has another prime-time bonanza after their two previous Blue Blood match-ups were the first and second most highly rated games of the regular season.

Zion was sensational in his return after missing six games with the sprained knee on February 20 against UNC the first time and missing the second meeting. He huffed and puffed his way to 29 points, a perfect 13 of 13 from the floor, and 14 rebounds against Syracuse in the fourth quarterfinal, as his teammates looked out of sync with his reentry.

With Zion and Duke monopolizing college basketball, under-the-radar Carolina has emerged as a better team than Ol’ Roy’s 2017 national champs, with Coby cutting down the turnovers and upping his explosiveness, Cam Johnson showing far better outside range than Justin Jackson, Kenny Williams not shooting well but dedicating himself to defense and Maye setting the example for hard work in the gym and on the court.

The Blue Devils are still America’s darlings, and they can certainly beat the Heels tonight, but as much as missing Zion was an asterisk of sorts, Carolina wants to win again with Williamson back and reach the ninth ACC championship game in Roy’s 16 head-coaching season at his alma mater.

And I think his latest, still-developing club has the chops to do it.