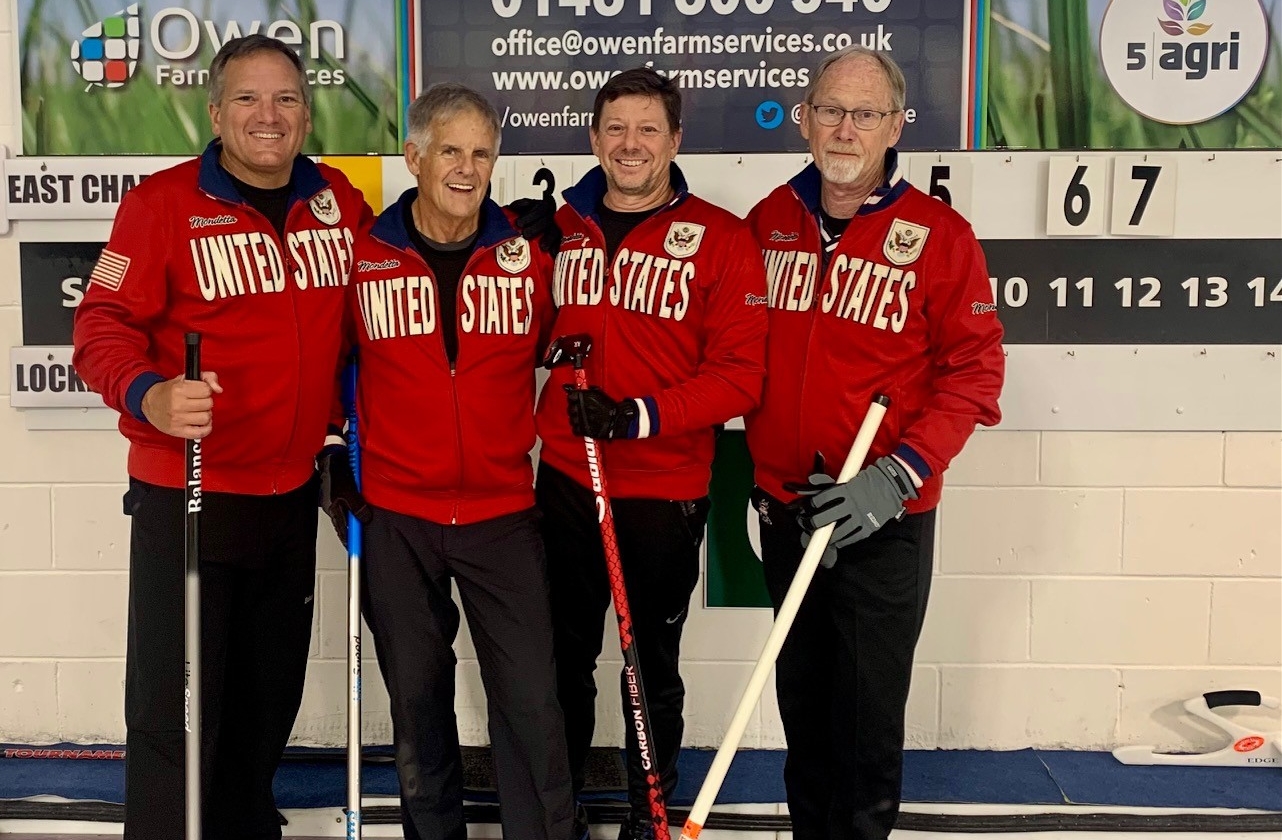 Mark Moshier and Rob Maitland are two local Chapel Hill businessmen. Moshier is a member of a real estate property group, while Maitland is the founder of a local law firm. They’ve both also represented their country in an international curling championship.

“I’m a big proponent of any sport that I can play that involves a beer at the end,” said Maitland. “Maybe even during!”

Curling, one of the most unique sports on the planet and a signature event of the Winter Olympics, certainly qualifies. According to Maitland, the game “promotes camaraderie,” with a postgame beer always being bought for the losing team. It’s just one of the many curling traditions that hooked Moshier and Maitland.

The two are part of the local rotary club in Chapel Hill, and were first introduced to the sport when the group took an outing to the Triangle Curling Club in Durham.

As luck would have it, the International Curling Fellowship of Rotarians, the largest non-professional curling organization in the world, was holding its championship in Raleigh the following January. Moshier and Maitland at first offered to sponsor the event, but then ended up playing in it as part of a four-man team. Their two teammates were former world champions, who unlike Moshier and Maitland, had been playing the sport for years.

“It takes you an hour to learn and a lifetime to master,” Maitland said. “I would say it took us about three or four seasons to really start to get good.”

Moshier was a little more blunt regarding his early performances.

Their fortunes turned around at a Canadian-American Championship event, in which Moshier and Maitland’s team was matched up with a side from the Great White North. Maitland described the Canadians as the “titans of curling.”

“They might have 1,000 teams playing to get to the three teams that qualify for the World Championships,” Maitland said. “And the United States might have 20 or 25.”

When the two teams faced off, Maitland sensed the Canadians might have been taking it easy on the Americans. As it turned out, maybe a little too easy.

“Somehow… we won,” he said. “It was like Buster Douglas beating Mike Tyson. And it was humiliating for them!”

The Canadian team didn’t lose another game during the tournament.

And so, Moshier and Maitland’s team, representing the curling mecca of North Carolina, qualified for the 2022 ICFR World Championships in April. If you think that line was facetious, Maitland will stop you in your tracks. He called the Triangle Curling Club “one of the best facilities in the country,” while noting that the club now boasts almost 400 members.

“The curling scene is on fire!” he said.

With a new curling hotbed cheering them on, the North Carolina team traveled to Dumfries, Scotland for the tournament.

Why Scotland? The country is the birthplace of curling, and still serves as the curling stone capital of the world. Ailsa Craig, an uninhabited island off the southwest coast of Scotland, has long donated its granite to curling competitions.

And if the sport of trying to throw heavy stones accurately across a sheet of ice seems archaic, that’s because it is. According to the World Curling Federation, curling is “widely believed to be one of the world’s oldest team sports.” Paintings and written evidence describing the game date back to the 16th century, when hardy Scots held contests on frozen lochs and ponds.

So it was only fitting that Maitland and Moshier would have to cross the Atlantic to participate in the World Championships. And while it wasn’t quite the Olympics, the occasion was a special one; so special, in fact, that Maitland outfitted his team accordingly.

“I managed to find actual Olympic jackets that the U.S. Olympic team wore,” he said. “And so we put our names on the back of those. My theory always is, ‘If you can’t be good, at least look good.’ Well, we looked great!” 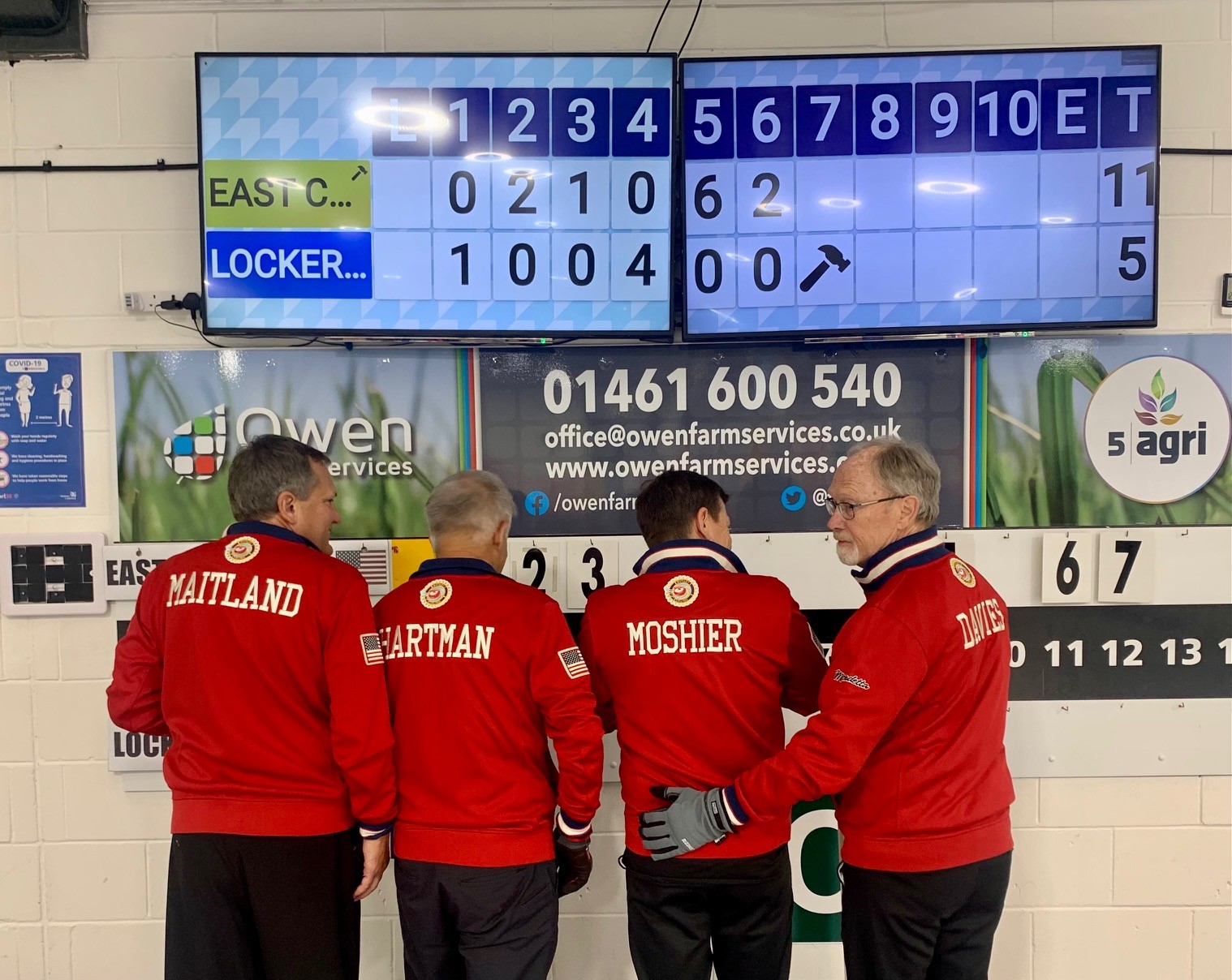 Snazzy jackets aside, the North Carolina team was facing off against some of the best curling sides from the United States, Canada, Scotland, England and the Netherlands. Expectations weren’t exactly sky-high.

“There were other American teams that were trying to prep us and say, ‘You probably won’t do that well,’” Moshier said. “So we went in with low expectations, but we also went in with high motivation to do the best we could.”

Those low expectations weren’t helped when the fifth member of the North Carolina team could not make the trip to Scotland due to an illness. The group would be down to just four, meaning they had no backups. And while curling doesn’t carry the strenuous reputation of other Olympic sports, each stone weighs 44 pounds. All those throws take a toll.

“But not for us,” Maitland added.

“We are finely-tuned athletes,” said Moshier.

The trip to Scotland wasn’t all about curling. Moshier and Maitland made time during the competition to explore the country and see everything it had to offer. Maitland, who has Scottish ancestry, visited the castle which bears his name. Castle Maitland is still inhabited to this day. 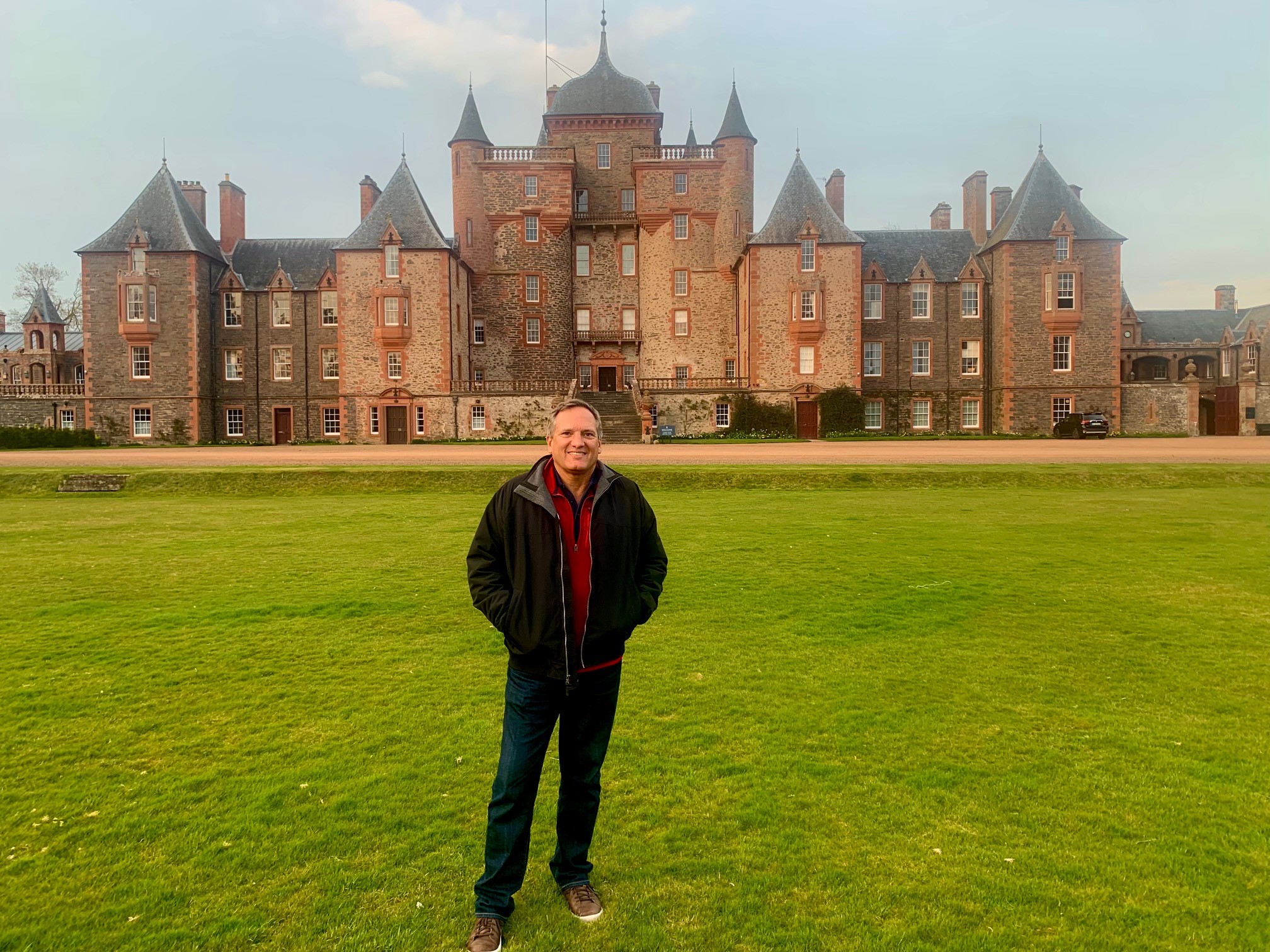 The pair also discovered some particularly gnarly Scottish curling traditions. For example, the winner of the Scottish national curling championship not only qualifies for various world championship competitions, but is also awarded a rather unique trophy. It’s known as the “Ram’s Head Trophy.” The phrase “Ram’s Head” has several different meanings around Chapel Hill, but the Scots take it quite literally. The trophy is an actual ram’s head, stuffed and outfitted with metal ornaments on the curled horns. 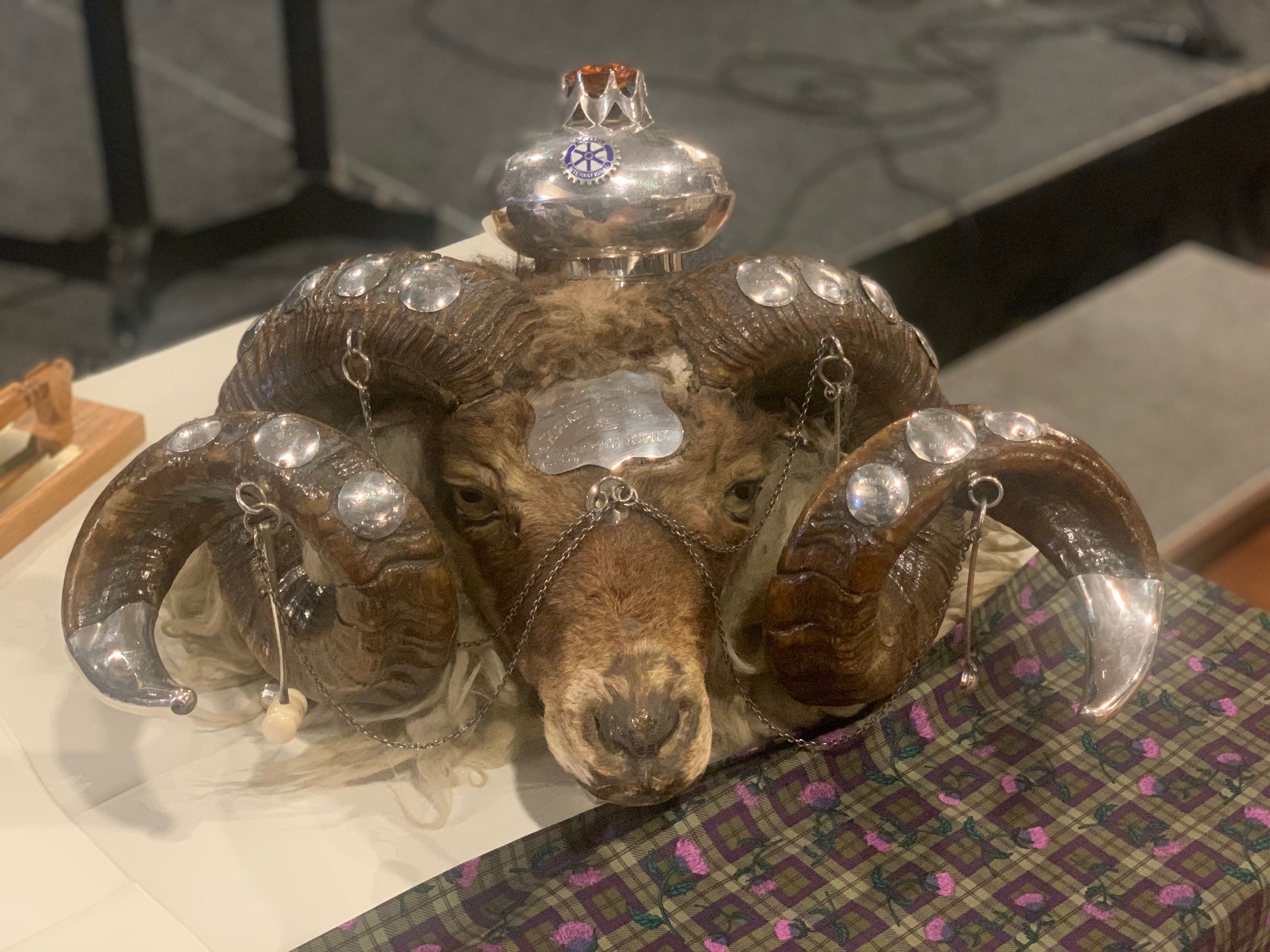 The Ram’s Head Trophy, given to the winner of the Scottish national curling championship. No UNC mascots were harmed in the making of the trophy. (Image via Rob Maitland)

According to Moshier and Maitland, ram’s heads are considered collector’s items among the Scots. In Chapel Hill, displaying such an item might draw attention from the UNC Campus Police Department.

But back to curling.

Due to the sport’s Scottish heritage and the location of the championships, Maitland, Moshier and every other team on the ice during the competition were played in by live bagpipes. 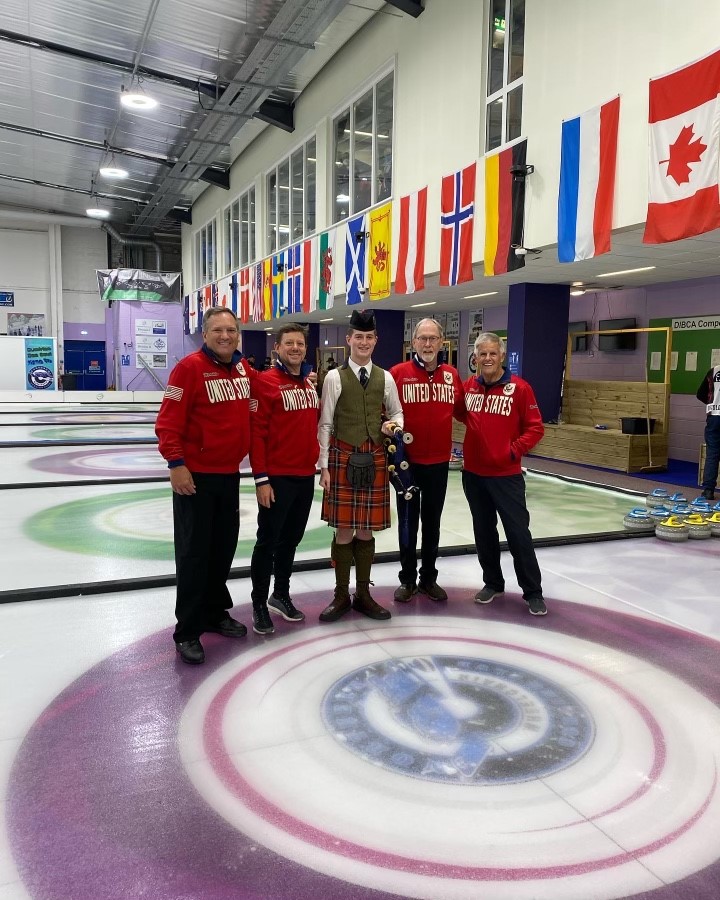 Once the music stopped, it was all business. And these two businessmen were ready to exceed the “low expectations” held by some of their American peers.

“We were gonna be happy if we managed to win one, maybe two games,” Maitland said.

They won. Then, they won again. And again, and again. The North Carolina team won four games at the tournament, advancing all the way to the semifinals. There, they faced a team from Scotland. The game came down to the final end (in curling, each cycle of play is called an ‘end,’ similar to an inning in baseball).

“We were standing on the lane. We thought we had the game won,” said Maitland. “The other team had three shots, and they’d already missed two.”

The North Carolina team was well-positioned to win, with a potential two-point end giving them the victory. In curling, points are awarded based on the team’s closest stones to the center of the target (called the “house” or the “button”) on the ice. A team gets one point for each stone that is closer to the house than the opponent’s closest stone.

Should the Scottish team miss on their final throw, Moshier, Maitland and the North Carolina team would be competing for the World Championship in the final round. And here’s where the classic Wide World of Sports tagline comes in: “The Agony of Defeat.”

“This third shot, it was like there was some sort of radar on it,” said Maitland.

“It was an Olympic-caliber shot,” Moshier said. “It was so narrow of a lane that he had to get through to take the two points away from us, and he executed it… I was pretty bummed, but it was an awesome shot.”

And so ended the World Championship journey of the intrepid North Carolina curlers. Now, a little more than a month later, Maitland remains grateful for the opportunity he and his team had in Dumfries.

“How often in your life do you get to compete in the World Championships of anything?” he said. “And this is the rotary World Championships, but you’re still talking about thousands of people… and just for the opportunity to be part of that in any way was just such a humbling experience.”

Still, there’s always the next tournament, and the 2028 World Championships are being held in the Triangle (it was originally supposed to host in 2020, but that event was canceled due to the pandemic). To accommodate the tournament, the Triangle Curling Club is aiming to expand its facility to eight lanes, which would make it just the third such facility in the United States and the first in the southeast.

“Oh, absolutely,” Maitland said when asked if he planned to compete in 2028. “If I’m still alive.”

But every pastime has its limit. Both Moshier and Maitland emphasized the level of training required to achieve curling greatness at the Olympic level: throwing stones and practicing pretty much every day. When asked if Team USA was somewhere in their curling future, Maitland and Moshier both laughed.

“That’s a great conversation to have with my wife,” Moshier said. “She’s like, ‘Absolutely not.’”