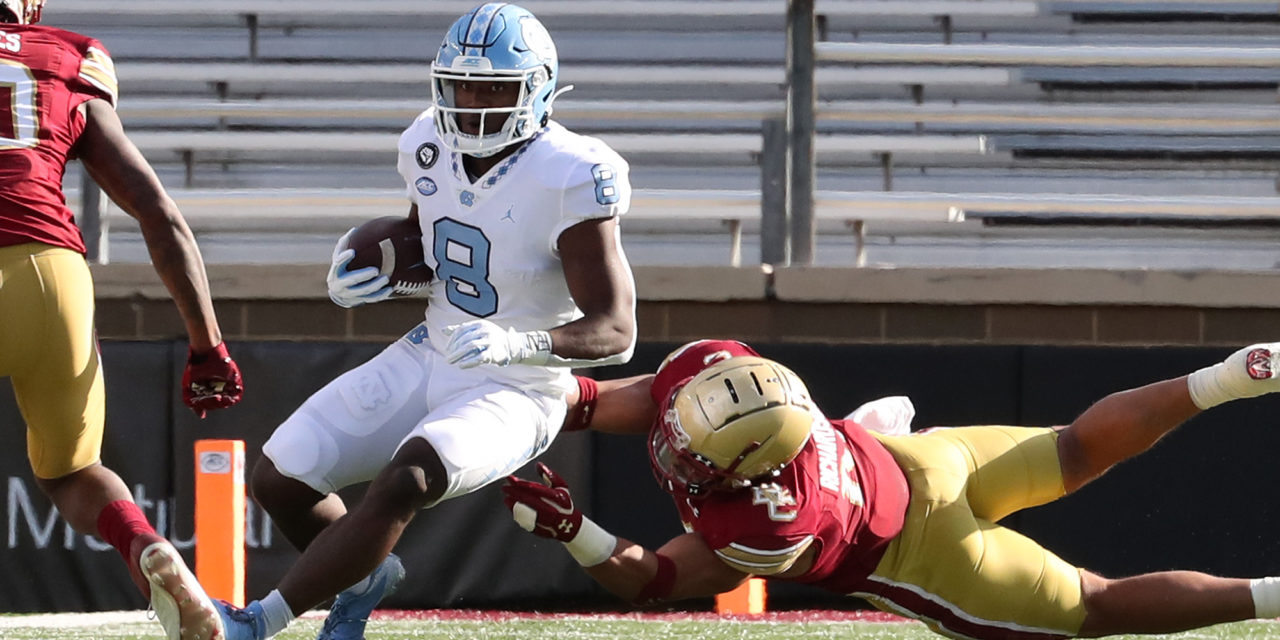 In a chippy, Chestnut Hill battle where both teams provided the emotion an empty stadium could not, Carolina played just well enough to escape with a pulsating 26-22 win that wasn’t sealed until the Tar Heels stopped a two-point conversion to tie and recovered the ensuing onsides kick.

Cornerback-converted safety Trey Morrison got the passion pumping early in the game when he blasted big Boston College tight end Hunter Long on a reception at the UNC 5-yard line, dislodging the ball and triggering a sideline celebration that angered the Eagles and made them very hard to handle the rest of the autumn afternoon in New England.

BC coach Jeff Hafley could be heard (over the absence of crowd noise) chastising the visiting team for reveling over Morrison’s textbook, perfectly-legal tackle that turned a first-and-goal into a field goal and his team into a version of the NFL Patriots’ defense. Long, a 6-5 college Gronk, recovered to catch nine balls including one that set up potential overtime.

Carolina led 21-16 at the half before the game became one of the leather helmet days, with only 11 points scored the entire second half, the last six creating a nationally televised “thrilla in Chestnut Hilla.”

Morrison was again the man about three hours later after BC had finished a penalty-marred desperation drive that closed the deficit to two points. The Tar Heels’ defense pressure the Eagles’ rather large quarterback Phil Jurkovec into a bad throw, which Morrison picked off at the goal line and returned past more hysterical teammates 100 yards and two points the other way.

Yet almost a minute remained and it wasn’t quite over until UNC’s hero from nowhere Chazz Surratt came out of the scrum of the ensuing onsides kick with possession of the ball that had BC players slamming helmets and barking at the officials whom they claimed made the wrong call.

After a 21-day layoff, the Tar Heels were itchy to play but plenty rusty in running their record to 2-0 with a visit expected from Virginia Tech this coming Saturday. That is yet another story after the Hokies won their second straight game with more than 20 team members sidelined by COVID. I say “expected” because nothing should be assured in a season we’ll remember for years to come.

What became BC’s first loss of that season (2-1) had some of what we’ve come to anticipate and some new stuff, too.

Mack Brown’s team may have decided that all-white is the preferred road uniform, as menacing all-navy is at home. Over the years, critics have crowed that baby blue is not a ferociousness enough color for a football team that wanted to be known among the toughest. And, somehow, all-white does that for the Heels, a sort-of solidarity that makes the team stand out and stand together under traditional light blue helmets. Anyway, that’s just my take.

For the second game of his sophomore season, Sam Howell was good but not great. He threw two touchdown passes and ran the ball much better than a year ago. But, with those skills to make a big play, Howell still got sacked four times, whether the fault of missed blocks or wrong routes by receivers. There was also a blind-side hit that became a wounded bird BC picked off and turned into a touchdown that got the Eagles back into a game Carolina dominated early.

Howell’s TD strikes were to Khafre Brown, the young brother of Dyami, which shows you that Coach Brown has got all kinds of talented kids we’ve never heard of before, and a sidearm dart to Javonte Williams streaking across the middle. Howell let it go as he was just crossing the line of scrimmage, making it a an oh-so-close scoring pass of 41 yards and a 21-13 lead at the time.

“A magical play,” Jones Angell described it on the 97.9 The Hill broadcast, as the Tar Heels left behind were now chirping at the BC sideline while Williams split the defense to the end zone.

And, just as it happened against Syracuse almost a month ago, Javonte scored again from inside the 10 after Michael Carter did most of the dirty work between the red zones. Carter ran for 121 yards, an average of 7.6 per tote; he also botched the fair catch of a BC kickoff that was supposed to go out to the 25-yard line but was placed at the 10 by the refs and led to the Howell pick and the first BC six.

Among the other missing elements of the game was Mack’s wife, Sally, who due to COVID caution remained in Chapel Hill to watch on TV. In 29 years as Mack’s partner in crime, Sally has only missed two other road games, one at Ole Miss and the other at Nebraska, both while they were in Austin.

“At Texas, I was upset after we won but didn’t play well,” Brown said afterward. “I promised I wasn’t going to be that way back at Carolina. It’s all about winning, and our objective was to be 2-0. The good thing is we didn’t play our best game and still won against a good, very physical opponent. We can coach them harder after a win like these.”