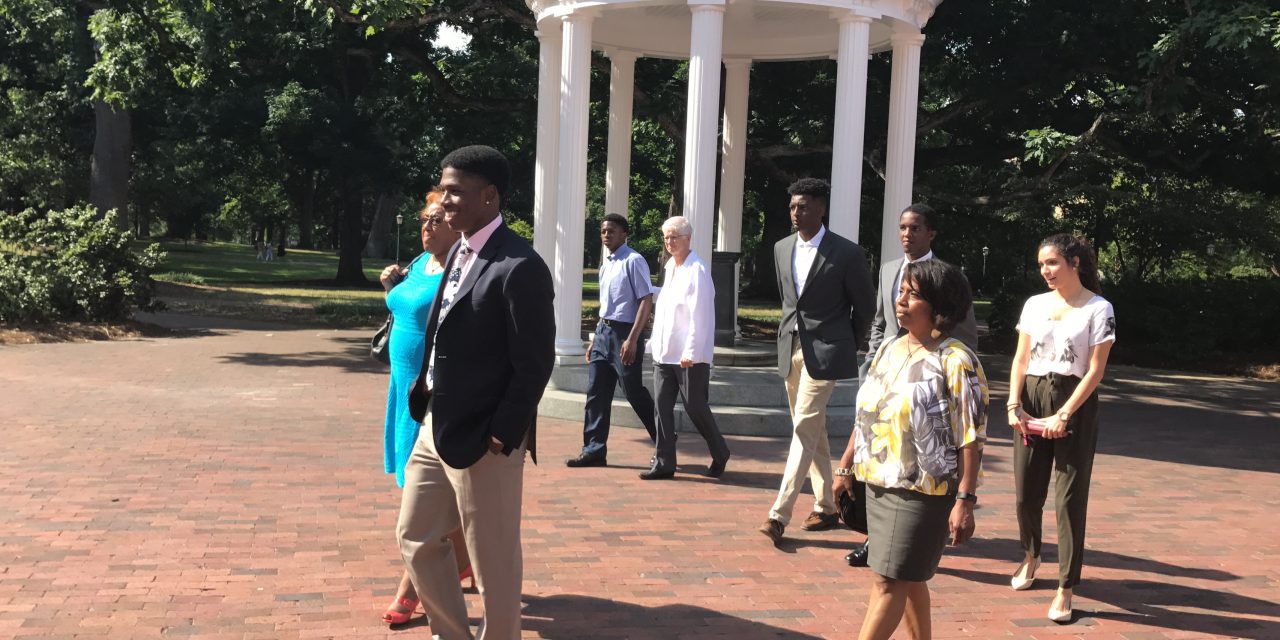 Sexual assault charges have been dropped against a suspended UNC football player.

Allen Artis was a reserve linebacker for the UNC football team at this time last year. But in September he was charged with sexual battery and assault after another UNC student took out self-sworn misdemeanor warrants against Artis. That led to Artis being suspended, per team policy.

“Today, Mr. Artis is happy to tell you that those charges were dismissed against him,” said Artis’ defense attorney Kerry Sutton at a press conference in front of the Old Well on UNC’s campus Thursday afternoon.

Orange County District Attorney Jim Woodall said in a statement to WCHL that “charges were resolved to the satisfaction of both parties. These are difficult cases involving very young people. I hope they can move on from this and I feel confident that they will.”

Delaney Robinson is the fellow UNC student who brought these charges against Artis. WCHL does not typically identify alleged victims of sexual assault but Robinson went public with her case at a September 2016 press conference.

The alleged incident took place on Valentine’s Day 2016, but Robinson took out the warrants on her own after she said she grew frustrated with the pace of the investigation by local law enforcement and the university.

Artis said Thursday afternoon that he was still attempting to understand the full scope of the decision.

“I haven’t really had time to process everything,” Artis said. “It’s a little overwhelming.”

Sutton said both sides involved in the case had been working with the judge to reach a conclusion after a motions hearing last Friday resulted in subpoenas being issued for documents attained by authorities during the investigation.

“We’ve been working with the district attorney and Ms. Robinson and the judge for several days,” Sutton said. “This just seemed to be the best outcome for everyone.”

Artis said he continued to receive encouragement from many sources during the past few months as he was facing charges.

“Incredible support from my family, my friends, teammates,” Artis said while holding back tears.

Sutton has accused Robinson’s private attorney – Denise Branch – of distributing a photo at the September press conference that was manipulated to exaggerate marks on Robinson’s neck. Artis has always maintained his innocence and said after initially being charged that he thought the marks were hickeys.

In one of the motions heard at last week’s hearing, Sutton wrote that the defense in this case had been in touch with the district attorney’s office to discuss possible criminal penalties against Branch. Sutton also said Thursday that reporting Branch to the state BAR was also “one of the possibilities.”

“The parties worked diligently at mediation to resolve this matter to their mutual satisfaction resulting in a dismissal of the charges.  The resolution is confidential.  Delaney has suffered immeasurably and hoped that today’s resolution could begin her healing.”

Branch had previously issued the following statement regarding the photo in question:

“The photograph I presented at the press conference was given to me by Investigator Barbee with the UNC Department of Public Safety.   Ms. Sutton has not requested nor has she received any photographs from me or my office.  We have no idea from whom or from where Ms. Sutton obtained the photograph she submitted to the forensic analyst, and there is no way we can attest to the authenticity or alteration of Ms. Sutton’s photograph.”