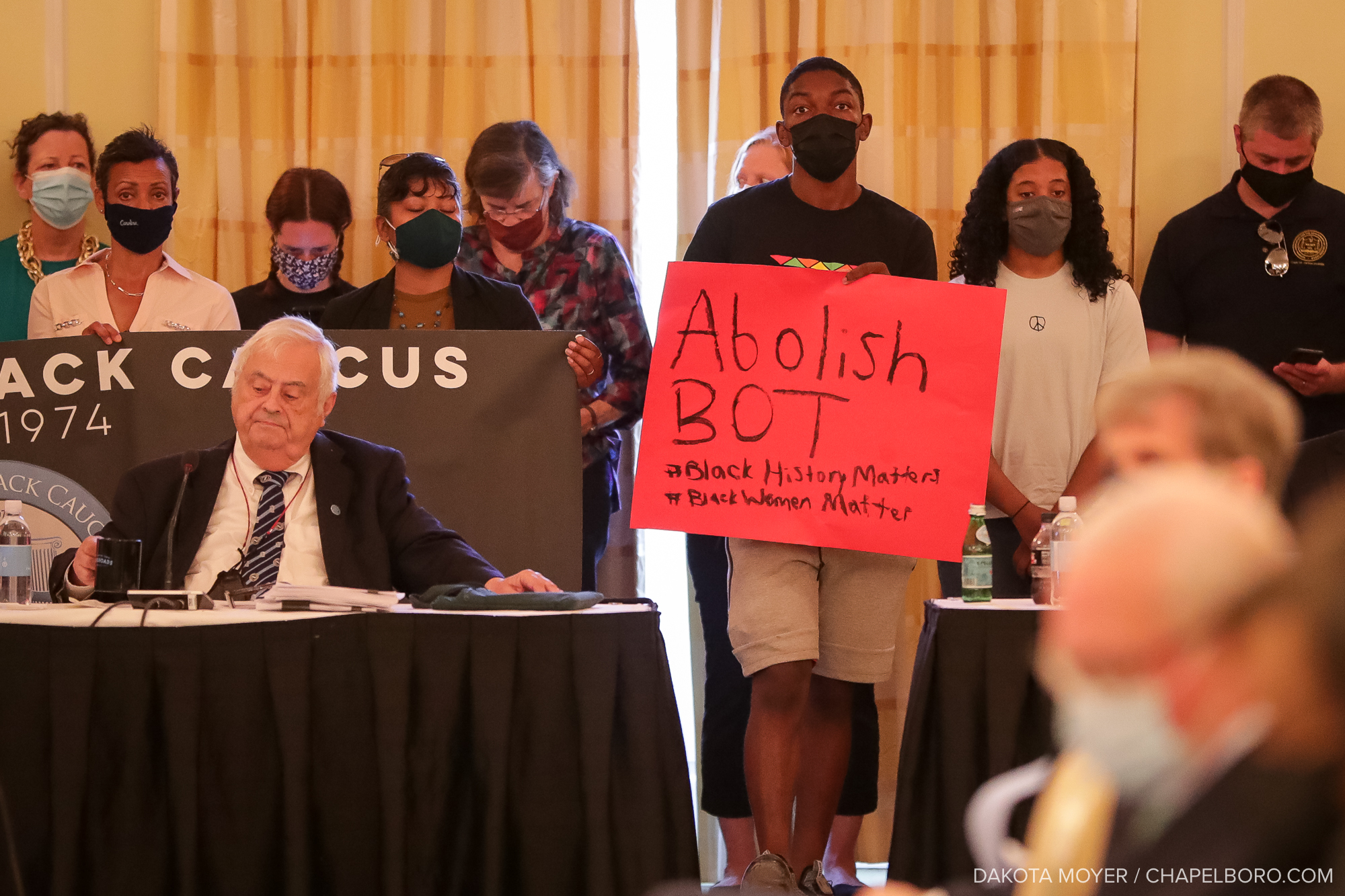 A recent study across eight UNC System campuses, including UNC-Chapel Hill, revealed students’ perceptions of freedom of expression in the classroom environment and interest in hearing others’ ideological perspectives.

The UNC Board of Trustees received a presentation on the report during a Wednesday committee meeting, which detailed a survey of several thousand students at UNC, UNC-Charlotte, Appalachian State and more. The report was led by three UNC faculty members and a UNC-Greensboro professor: Timothy Ryan, Mark McNeilly, Jennifer Larson and Andrew Engelhardt. Ryan, an associate professor in UNC’s Department of Political Science, said the group used a sampling technique that randomly selected classes that students took and asked specific questions to avoid any generalizations of experiences.

The report’s results reflect many trends seen nationally, according to Ryan. At seven of the eight schools, two or three students in every ten surveyed said they were concerned about judgment from their peers if they expressed sincere opinions on political topics during class. Additionally, at least one in every ten surveyed students at each school reported self-censoring their beliefs more than once in order to avoid perceived negative reactions — with there being a large divide between self-described conservative students and self-described moderate or liberal ones. When asked what they are most uncomfortable discussing with their honest opinions, the conservative students in the survey consistently responded the highest discomfort around topics like race, immigration, police, guns and COVID-19 protocols. 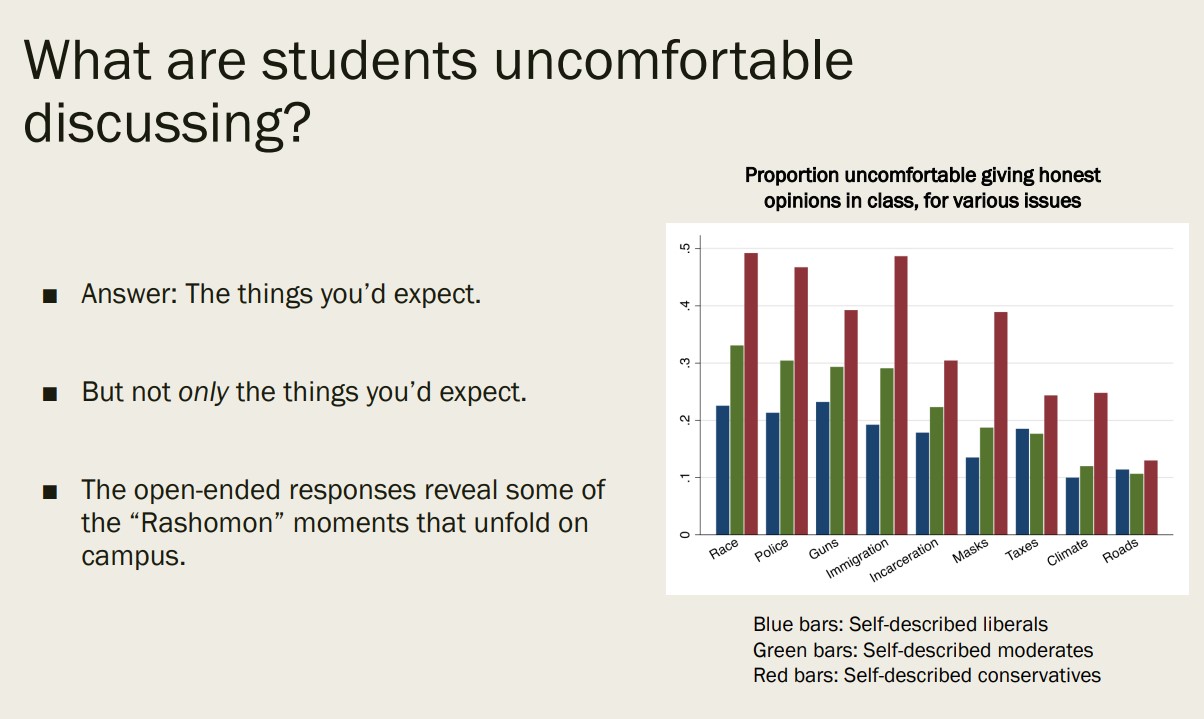 Ryan said open submission sections in the survey also resulted in many anecdotes revealing topics and moments not captured in the study. While the stories allowed the quartet to examine case-by-case examples of how students experience interactions, it adds to a “concerning” element of students not feeling like they can be honest with peers.

“What I saw across these open-ended responses,” Ryan said, “is a need for a certain formulation of maybe sensitivity training or socialization [for faculty] to just how diverse the people around us at a university like Chapel Hill really are.”

The political science professor added another finding highlighted the disparity between preferences of self-identifying liberal, moderate and conservative students outside of the classroom. Responses gauging students’ willingness to socialize with political out-groups revealed liberal students largely prefer being close friends with other self-identifying liberals over conservatives. Meanwhile, moderate and conservative students lean more toward indifference of ideology instead of heavily preferring to socialize with the in-group.

“When I think about this in the broader context of political behavior research,” said Ryan, “it’s consistent with what we expect within a community that leans one way or the other. You look at the breakdown [of the ideologies] on each of these campuses, the liberal students substantially outnumber the conservatives, it’s sort of a natural by-product of homogeneity or leaning toward [it], and yet it is something I think we should still be aware of and maybe concerned about.”

The study’s results also showed a disparity between student concerns about judgment from peers compared to judgment from professors, which Ryan said is different from national talking points or concerns about faculty members “indoctrinating” or singling out students based on their beliefs. At UNC-Chapel Hill, 57 percent of polled conservative students said they were concerned about their professor would have a lower opinion of them compared to 74 percent being concerned their fellow students would have lower opinions.

The final finding highlighted in the report is an interest across the political spectrum for “more opportunities to engage with those who think differently.” Ryan said at five of the eight universities, majorities of students said they believed there are too few opportunities for constructive engagement. Additionally, polled liberal students at six of the eight polled universities reported having more support for inviting conservative speakers than inviting more liberal speakers to campus. 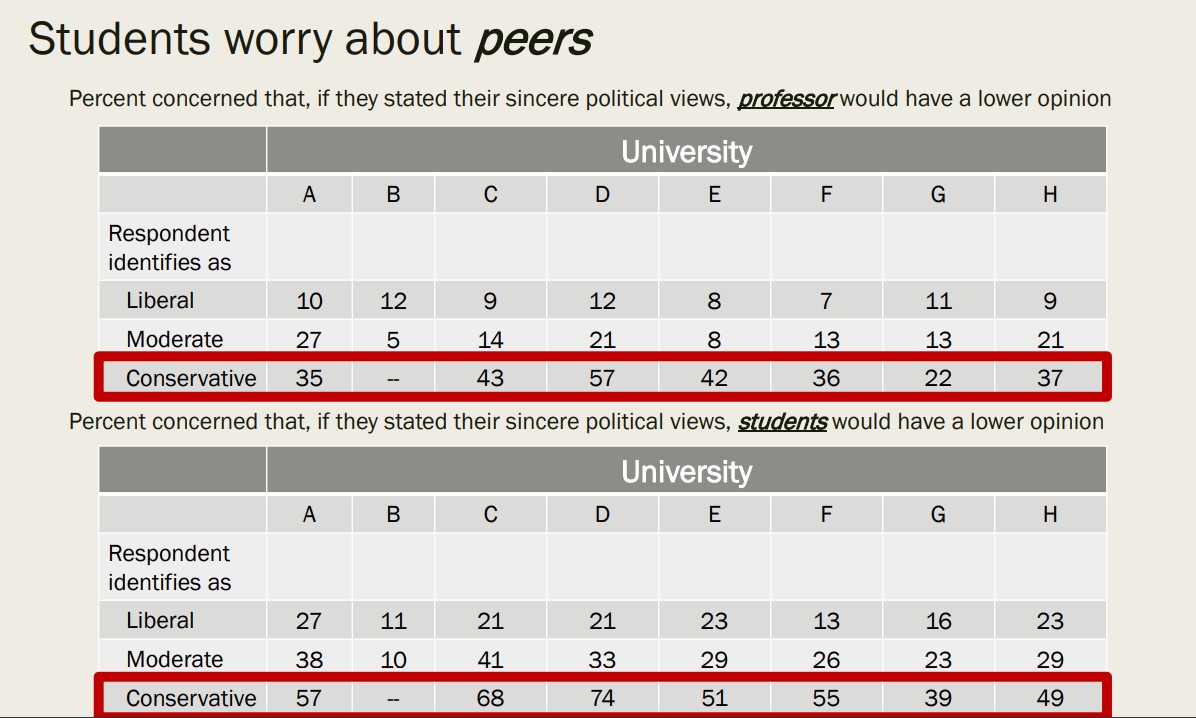 A presentation slide from a study across eight UNC System schools surveying feelings about freedom of discussion in classroom settings. The study creators highlighted the self-identifying conservative students’ percentages, which tracked higher than those self-identifying with other ideologies. (Photo via Timothy Ryan, Mark McNeilly, Jennifer Larson and Andrew Engelhardt.)

In their comments following the presentation, many trustees said they believe it is critical for the university to be able to foster constructive dialogue and engagement in the classroom environment.

Trustee Marty Kotis said he has been hearing concerns around “cocktail parties and dinners for a while” from some students’ families about “compelled speech” instead of full freedom of expression in school settings. He said he believes it is “disconcerting.”

“We talk a lot about diversity, equity and inclusion,” said Kotis. “Diversity also means diversity of opinions and freedom to explore thoughts. I just feel like we could say it’s the most critical issue going on right now — and it certainly among conservative families out there when they’re deciding where to send their children and this is how their children feel.”

After a break, the board’s University Affairs committee unanimously passed a resolution affirming UNC’s commitment to cultivating academic freedom and freedom of speech on campus. The measure was modeled on principles crafted by the University of Chicago for freedom of speech in 2014, as well as the 1967 Kalven Committee Report on a university’s role in political and social action.

Before the vote, Trustee Ralph Meekins said he supported the measure, but wanted to state his vote was not based on the accounts of people saying the university is “rudderless” or changing its atmosphere around freedom of expression.

“We’ve been through this many, many times before,” Meekins said. “We’ve been through crises, the Civil Rights movement, the free speech issues we had in the 1960s. We’re all having problems across our country right now because of all this is going on.

“Nothing [resolution author Trustee Perrin Jones] said made me upset,” he added, “but the fact we would do this resolution based upon what some people are perceiving — almost as if we’re acknowledging what they’re perceiving is accurate, when I don’t think that is — [does.] But, I’m for the resolution and I appreciate the hard work that went into it.”

During the discussion, Trustee John Preyer asked Chancellor Kevin Guskiewicz whether he thinks there is an underrepresentation of conservative views on campus compared to the current representation of “left-of-center” views.

“The data suggests that we’ve got to probably work more on creating that classroom environment where peers do not feel as if their viewpoints, be it their more left-leaning or right-leaning [ones], should in any way be attacked or not welcomed,” Guskiewicz responded. “I think we’ve got work to do, I think this [report] would suggest that. So, I’m not going to say whether I think we’re overrepresented with left-leaning views or underrepresented with right-leaning views.

“I commented at this very presentation that Tim and Mark made at the Board of Governors meeting about a month ago,” the chancellor continued. “My reaction to these data was that we can’t just say ‘Okay, everything is fine, our faculty aren’t indoctrinating students.’ I think we have work to do and that is that faculty can continue to work toward creating that environment where peers don’t feel as if their views are unwelcome in the classroom.”