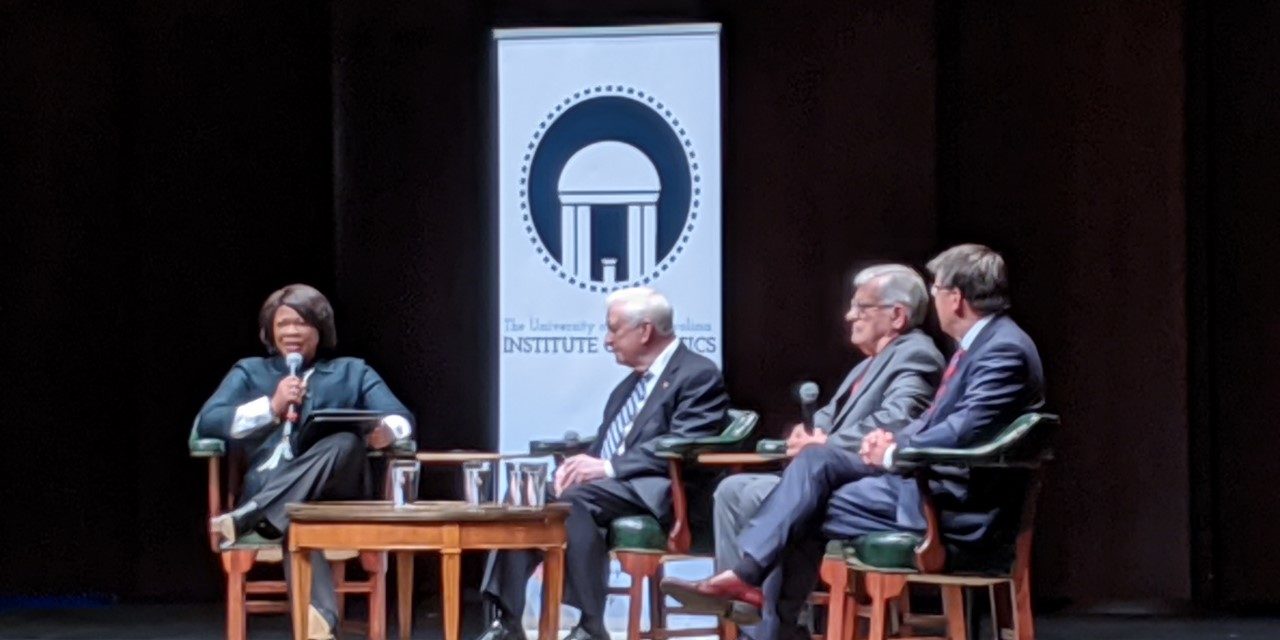 It’s not easy to meet with a former governor. It’s even harder to get two to meet with each other for an event. The UNC Institute of Politics, however, hosted three former North Carolina governors for a discussion panel last Thursday.

Former North Carolina Governors Jim Hunt, James Martin and Pat McCrory sat together on the stage of Memorial Hall and shared many memories on their time in office. The Esse Quam Videri panel focused on their combined experience of 28 years in the governorship.

While the governors spent a large portion of the panel discussing the state’s history, they were also asked about what the state must do to continue improving for the next decade.

Governor Martin responded by referencing a mantra he used while in office: ‘better schools, better roads, better jobs.’ He said while the times have changed and some issues are more complex than others, those items are still the priority when preparing the state for growth.

“Those were the three that I focused on,” Martin said, “and I still think those are the most important responsibilities. To help with the dozens of other things, I think we need to focus on those once again.”

Governor Hunt echoed those sentiments, expanding it to improving North Carolinians’ well-being as the priority. He said by doing that, the children and parents of the state would be prepared for healthier, happier lives. One important factor in that, Hunt said, is providing more affordable healthcare.

“Everybody needs to have good health insurance,” he said. “If we work on that and invest in our people in the next 10 years, we can make North Carolina the best state in America. We need to get about this thing, we can [achieve] this if we work at it.”

Governor McCrory agreed with Hunt, saying addressing mental health and addiction within the state’s citizens should be a higher priority.

“We’ve got to deal with this mental health crisis in our country,” said McCrory, “as well as addiction to alcohol and drugs, both legal and illegal. It’s tearing up families, communities and our education system. A lot of people are losing their life right now and it’s not being talked about in the obituaries you read.”

McCrory also pointed to managing transportation as a top priority for North Carolina this decade. He pointed to increased travel on and development along Interstate 85 as signs of continued growth in the corridor. To him, working out a mass transit method to help with traffic and move North Carolinians across the biggest areas of the state is key. He pointed the success Charlotte has had compared to the failure of the Durham-Orange Light Rail Project, saying better efforts need to be made.

“I’m very proud of what we did with mass transit in Charlotte,” said McCrory. “Raleigh, Durham and Chapel Hill have made a major mistake in not forming a coalition to make it happen in this area. Shame on them.”

When asked whether they believed the divisiveness between parties is the future of the state and General Assembly, none of the governors had a clear answer. Martin responded by sharing a poem written by William Butler Yates from 1919.

“He said, ‘Things fall apart. The center cannot hold. The best have no conviction while the worst are full of impassionate intensity,’” recited Martin. “He wrote that about the first World War but look around at where we are today.”

Hunt agreed, but pointed to events like the panel and groups like the Institute of Politics as encouraging signs.

“It’s a real problem and it’s one we ought to figure out,” Hunt said. “We’re smart enough to do it, but it isn’t easy. All these young people in this wonderful program here ought to figure it out. It can be done, it ought to be done.”