Race And Policing: Are We Addressing The Issue The Right Way? 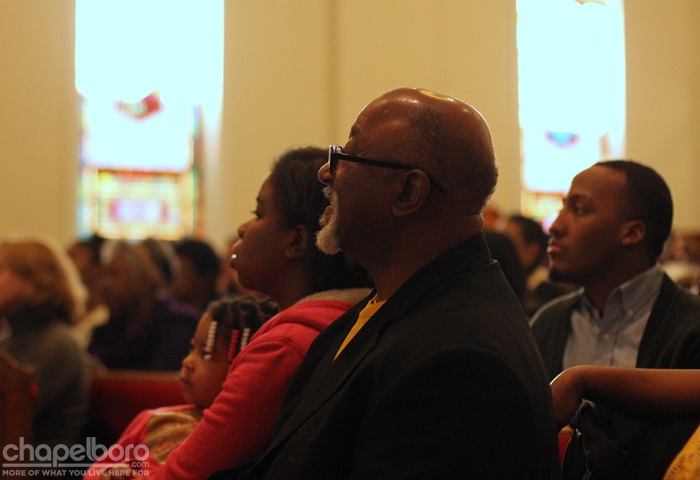 How can Chapel Hill prevent itself from becoming the next Tulsa, the next Charlotte, the next Ferguson? Are we taking the right steps now – and what more do we need to do?

Protests are still ongoing, across the state and beyond, after last week’s shooting death of Keith Lamont Scott by a police officer in Charlotte.

The details surrounding the incident are still in question. But Scott’s death (one in a series of similar incidents nationwide) has nevertheless helped spark a conversation about race in America, racial disparities in policing, and the relationship between police and residents, particularly African-American residents.

What are the facts? Numerous studies have confirmed that police departments across the country do, in fact, have a tendency to treat African-Americans differently. (One especially disturbing study out of UC-Davis found that black Americans are 3.49 times more likely than white Americans to be shot by police while unarmed.)

But the disparities persist – and not for the reasons you might think. There’s little correlation with crime rates, for one; police shootings are just as likely to occur in lower-crime cities as higher-crime cities. African-Americans are more likely than whites to have their vehicles searched after being pulled over – but police actually find contraband at a higher rate when searching vehicles driven by whites. (That disparity was particularly egregious in Ferguson, Missouri – where “black motorists were more than twice as likely to be searched as whites following a traffic stop, but were 26% less likely to be found in the possession of contraband,” according to a forthcoming report co-written by UNC professor Frank Baumgartner.) And it’s not just white officers who are discriminating: when it comes to racial disparities in policing, statistically speaking it doesn’t matter much whether the officer is white or black. (It was an African-American police officer who shot Keith Scott in Charlotte.)

Here’s a list of eighteen related studies on racial disparities in policing (including four cited above).

What about locally? At UNC, Frank Baumgartner has studied traffic stop data for police departments across North Carolina – and he’s found racial disparities in almost all of them. Police are significantly more likely to search the vehicles of African-Americans and Latinos after stopping them (particularly young men), even though they’re no more likely to find anything illegal. Orange County police departments are not immune: researchers have also found disparities in Chapel Hill and Carrboro as well as the Orange County Sheriff’s Office. Sheriff Charles Blackwood, Chapel Hill Police Chief Chris Blue, and Carrboro Police Chief Walter Horton have all expressed concerns about those numbers; they’ve each publicly committed to ongoing conversations with the community and active efforts to study possible reforms.

What’s the best way to make progress on this issue? Hillary Clinton and Donald Trump addressed the question at their first presidential debate on Monday. Trump called for an expansion of “stop and frisk” policies, which give police more leeway to search people on the street – arguing that the policy led to a significant drop in New York City’s crime rate. (New York’s crime rate did drop during the NYPD’s stop-and-frisk years – but the crime rate was also dropping nationwide, and there’s still disagreement over how much of a role “stop and frisk” played in New York. Former NYC mayor Rudy Giuliani, a Trump supporter, says “stop and frisk” made a difference; current mayor Bill de Blasio, a Clinton supporter, says other factors were more important.) Regardless of the impact on the crime rate, though, the “stop and frisk” policy did exacerbate tensions between the NYPD and the city’s black community – because there was a large racial disparity in how the policy was applied. Black New Yorkers were far more likely than white New Yorkers to be subjected to a frisk – so much so that a district court judge struck down the policy as unconstitutional. (The case never went beyond district court, because the city did not appeal.)

Hillary Clinton, on Monday, suggested a different approach. Rather than “stop and frisk,” she said, local law enforcement agencies should focus their efforts on community policing. The “community policing” model begins with a key insight: police officers and citizens often see each other as adversaries because they only encounter each other in moments of conflict, when circumstances are tense and there’s an immediate danger of violence. To build trust and stronger relationships, the community-policing approach encourages officers to engage with residents on a regular basis, in calmer and friendlier circumstances – speaking in classrooms, organizing charity events, getting to know the residents of a neighborhood, and so on. Advocates say that approach will make communities safer: crime rates are lower in close-knit neighborhoods, and people are less likely to break the law when they view “the law” as a friend rather than an adversary. (There’s some data to support the theory: for instance, the national crime rate dropped dramatically during the 1990s, the same time “community policing” became popular – though of course other factors may have played a larger role there.) But aside from the effect on crime rates, community-policing advocates also say the approach will ease tensions between police and African-Americans – and eventually begin to mitigate disparities as well.

Orange County’s local police departments have largely embraced the community-policing model, an approach that local African-American leaders applaud – even though they maintain (and local police chiefs agree) that there remain statistical disparities that still need to be addressed. Chapel Hill-Carrboro NAACP president Rev. Robert Campbell says Orange County’s approach – going all in on community policing while actively fostering a dialogue about race – could be (and should be) a model for other communities, like Charlotte and Tulsa and Ferguson.

That’s not to say ‘it can’t happen here’ – after all, it can happen anywhere – but Rev. Campbell says the local community is tackling the issue the right way.