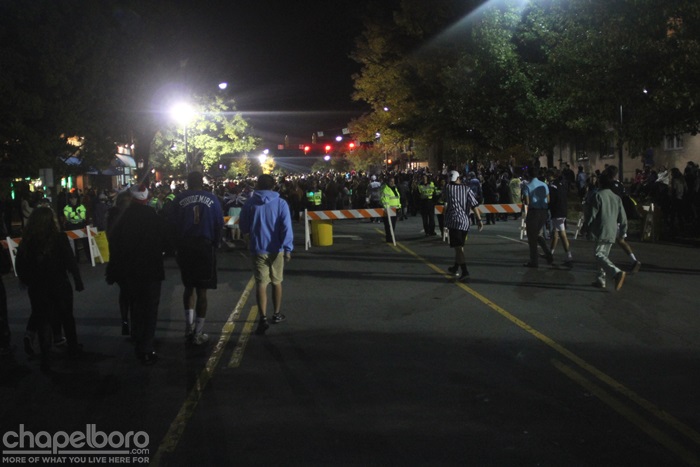 It’s Halloween in Chapel Hill, and tonight Franklin Street might be the best place in the state for people watching.

Halloween night ten years ago, 80,000 people showed up to Franklin Street; more than doubling the size of Chapel Hill. And though recent years haven’t brought that level of turnout, don’t underestimate the size of this event. Last year, 15,000 Halloween-goers crammed into downtown Chapel Hill, so expect travel delays if you are in the area.

And if you are attending, Police spokesperson Ran Northam advised against bringing glass containers or alcoholic beverages to the festivities. Drunk-driving enforcement will be out in force in the downtown area. Northam said alcohol-related injuries are a chief concern tonight.

“It’s a terrible safety concern, and we ask people to know their limits, stay hydrated, and continue to be safe when it comes to that,” Northam said.

Avoid costume accessories that look like weapons, or weapons themselves, he went on to said. Those won’t be allowed past the barricades surrounding Franklin Street. He also advised against bringing pets.

Road closures will bring traffic in the area to a crawl after dark. Drivers can expect Franklin Street, adjacent parts of Columbia and other nearby roads to be closed down between 8 p-m till 10-30, or maybe later depending on how long clean-up takes.

Parking will be restricted along most of West and East Franklin. There will be no parking on Henderson Street.

Additionally, many transits routes will experiences delays, be rerouted or closed. Around 10 routes through the downtown area will stop running early tonight as well. A complete list of transit changes is available on the town’s website.