Parking at a residence on Carver Street in the Northside neighborhood before parking limit was put in place. Photo courtesy of Hudson Vaughn.

CHAPEL HILL – You could see a change in Northside neighborhood, as landlords who rent property there are suing Chapel Hill over a parking regulation.

Mark Patmore is the owner of Mercia Rental Properties and one of the landlords suing the Town. He’s challenging a limit put in place by Chapel Hill last fall limiting the number of cars that can be parked in front of Northside properties at four vehicles per residence.

In addition, duplexes and triplexes are allowed up to six vehicles and renters can get five street parking permits per lease.

A state Superior Court has already denied the motion to get rid of Chapel Hill’s rule, but Patmore says this is expected and this case needs to go to the state Supreme Court because it is a state issue.

“That authority comes from the state, so that’s where it belongs, which will be, not in superior court or appeals, but supreme.” Patmore says.

Benjamin Sullivan is the attorney with Parker Poe Adams & Bernstein LLP who is representing Chapel Hill in this case. He says there is precedent for even the state Supreme Court to side with towns when it comes to parking restrictions.

“Towns and counties have had parking regulations in one form or another and those have been challenged, based on the idea that they were beyond the authority of the local government that adopted them,” Sullivan says. “Our Court of Appeals and our Supreme Court have said, ‘No, those are regulations that are within the zoning powers that local governments have in North Carolina.”

Sullivan adds that, although parking is not included in the zoning statues, it is still within a town’s legal authority to make regulations like the one in Northside.

“The zoning statues are intentionally very general,” Sullivan says. “They’re a pretty broad grant of authority and it’s up to the towns, cities and counties to decide which regulations are appropriate.” 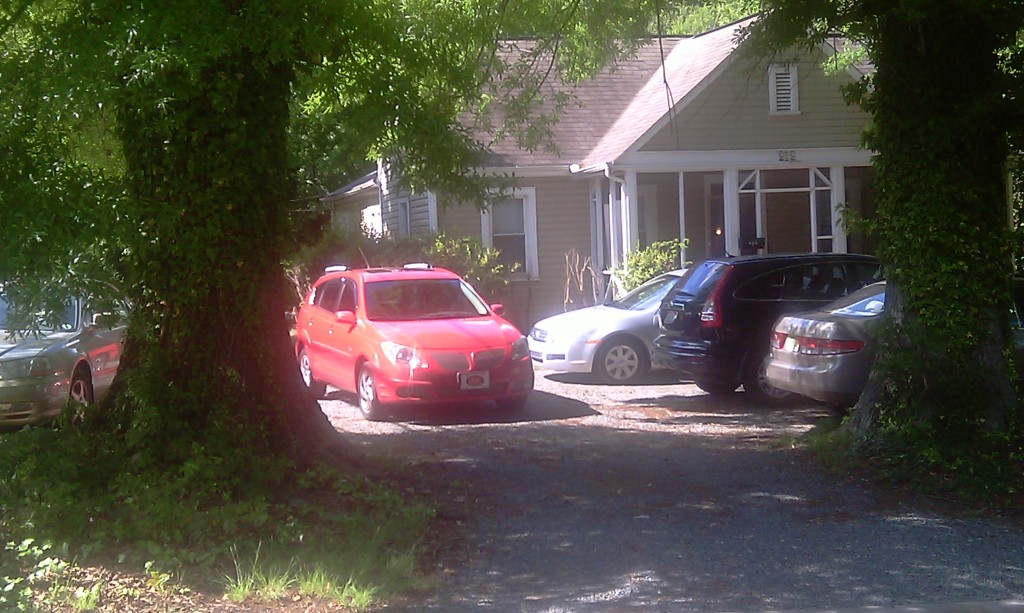 Parking at a residence on Carr Street in the Northside neighborhood before parking limit was put in place. Photo courtesy of Hudson Vaughn.

Patmore says that Chapel Hill’s restrictions on parking not only hurt him as a landlord, but force visitors to homes in Northside into an unsafe situation where they have to park away from the residence and then walk there, possibly alone or at night.

“I think every resident in this town has the right to be able to park at their home if they have the place to park,” Patmore says.

Part of Chapel Hill’s parking limit in Northside was to prevent visitors and others from parking on lawns and crowding yards and streets.

Hudson Vaughn is the associate director of Northside’s community development center, the Jackson Center. He says that before the parking limit, there was a high volume of cars being parked on Northside properties.

“It felt in the neighborhood like a lot of the front and back yards of houses were turning into, basically, parking lots,” Vaughn says.

“There’s a lot fewer cars and cars are often parked more in the back now and there’s tighter regulations that landlords are putting on for front yard parking for the look of things,” Vaughn says.

Patmore says when he built rental property in Northside, the town required him to put in a parking area.

“I went ahead and constructed that parking area and now, 10 years later, they’re turning around and saying, ‘You did a good job, but now you can’t use it,’” Patmore says.

At trial, Patmore also argued that the fines imposed by the town for the parking violations are unfairly distributed because they go to him and not the residents doing the actual parking.

Patmore says he passes the fines onto his tenants and includes in his leases that tenants must obey the parking ordinance.

Sullivan says this method of fining better enforces the parking limit than directly fining the renters.

“The landlords have the ability to better regulate what they’re tenants do than we can,” Sullivan says. “It’s a more effective enforcement mechanism if the property owners are held responsible by the town, because they’re in a position where they can have these lease agreements with their tenants and can control what their tenants do.”

Patmore says he sees it differently.

Vaughn says the issue with parking in Northside is symptomatic of property in the neighborhood being over-occupied by student renters.

“It’s all connected to the impact that student rentals in particular are having, especially when there are more than four students in a house,” Vaughn says.

Violating the vehicle limit results in a $100 fine from the city, with an additional $100 for each day the excess car remains.