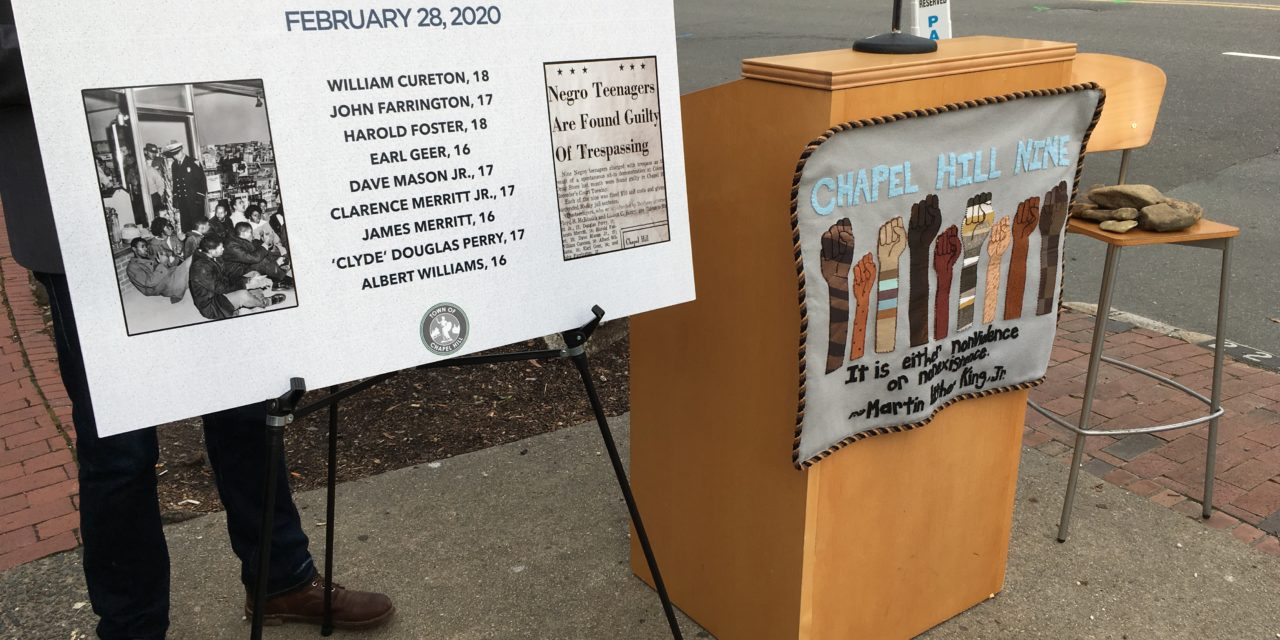 The Chapel Hill Nine were just high school students in 1960 when they staged sit-ins at a Franklin Street drug store that did not serve black customers at its counter. Now, nearly sixty years later, members of the Chapel Hill Nine were on hand to dedicate the land for a historical marker outside of the Colonial Drug Store, where the West End Wine Bar now stands.

Mayor Pam Hemminger spoke at the dedication, and so did Jerry Neville, a member of the town’s Historic Civil Rights Commemorations Task Force that worked on the marker.

“I am so glad the town has finally started to honor the real heroes of the community, that made an impact on what some call, ‘The Southern Part of Heaven,’” he said.

Neville remembers growing up participating in local civil rights demonstrations, and highlighted the unique community organizing that took place within the segregated all-black Lincoln High School and the larger community.

“We have a legacy here, a legacy and a tradition, in Chapel Hill, that started by the Chapel Hill Nine. And we need to maintain and continue to make this a great place to live, work and play.”

After the dedication, there was a short march around the corner to the First Baptist Church on North Robeson Street.

Arminta Foushee, a Marketing and Communications coordinator in the NCCU School of Law, attended with her son Christian, who was scheduled to play during ceremonies at the church. Foushee grew up just across the street from the First Baptist Church. She said she remembers picketing during civil rights demonstrations with family and friends as a child and is happy to see this chapter of history commemorated in the wider community.

And as for why it took so long for a historical maker to be built?

“I think probably, complacency. You know, people not understanding the importance of history,” she said.

The marker is planned to be constructed next year and completed in time for the 60th anniversary of the Chapel Hill Nine’s sit-ins in late February 2020.