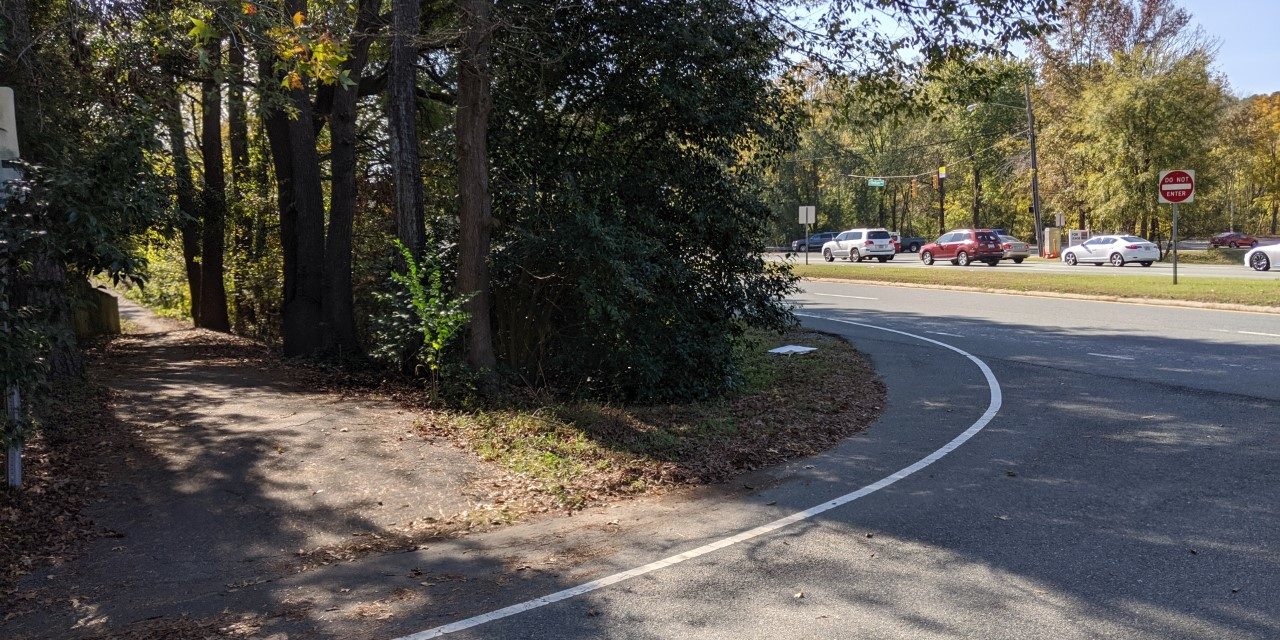 Tab Combs stands at the entrance of her neighborhood, Little Ridgefield. The Hickory Road resident points out how an existing path from Cleland Drive down the street would connect with a new side path proposed by the Town of Chapel Hill.

“We’re about 20 feet from the outside edge of Fordham Boulevard, and we’re standing where the existing path intersects with Ridgefield Road,” Combs says before pointing toward thick vegetation across the street. “The proposal would have the path shoot straight across to the other side there, parallel with Fordham.”

Walking toward the intersection with Hickory Road on the way to Combs’ house, Kim Stahl, who also lives in the Ridgefield neighborhood, brings up the difference in safety from beside Fordham and where they stand.

“The fear we were feeling standing at the intersection with Fordham is just not there [anymore],” she says. “It’s quieter; it’s completely safe and never a danger.”

This difference in proximity to motorists is a key reason why members of the Little Ridgefield neighborhood have opposed the plans of a paved greenway along Fordham. Both Combs and Stahl say they’re concerned over the safety of those using a path crossing Ridgefield Road at its intersection because of how quickly drivers turn off from Fordham. Stahl says the current path’s design, and its users’ tendency to stay to the right side while walking to Hickory Road, has not led to any safety problems in the past.

“I drive in on Ridgefield [Road]; that’s how I commute,” she says. “There have been several times where someone was hugging the curb and not crossing. I’m glad that it was not the [awful] situation it could’ve been.”

The neighborhood is proposing an alternative plan where pedestrians and bicyclists continue their typical method of traveling down Ridgefield to Hickory Road and using Hickory to reach Willow Drive. If the town officially declares Hickory Road a shared street, users of the greenway could travel the existing street system with updated pedestrian and bike lane markings.

Combs says the amount of bicycle traffic on her street, which is already a marked bike route by Orange County, clearly shows the popularity of the street for alternate modes of transportation while remaining very safe.

“I’ve done some informal counts while out walking my dog in the evening,” says Combs, “and you can easily see two dozen people riding their bikes in a half-hour window at the end of a workday. We know there is a lot of bicycle traffic through here.”

The shared street design is now one being considered by the project manager Bill Webster, who works for Chapel Hill’s Parks and Recreation department. Having worked on other greenways for the town before, he says he believes through signage, raised pedestrian crosswalks, and other methods, the town could make the gap between the paths safer.

“I think the safety issues are addressable,” says Webster. “That doesn’t mean there’s no chance anybody would ever get hurt, because somebody could get hurt no matter how well-designed a facility is. But I don’t think there’s anything about this project that’s so outrageously dangerous that it’s unconscionable to build it.”

Webster says this project is part of the town’s broader vision of building multi-use paths to improve connectivity between areas within Chapel Hill. The goal of the Fordham side path would be to eventually connect neighborhoods with the Blue Hill District, which has its own sidewalks and paths complete. This project earned funding from the state’s Department of Transportation thanks to a grant Chapel Hill applied for a few years ago.

One challenge Webster says the side path faces if built along Fordham Boulevard is how construction will eliminate the natural buffer of trees between Hickory Road residents’ properties and the thoroughfare. To meet state standards, there must be a substantial buffer of land between the path and the parallel road, meaning it would be closer to residents’ homes than the road. Webster says community members expressed their disappointment at public meetings about the project over the lack of a natural buffer to block the sounds of traffic.

“We would be able to replace some of it,” he says. “We’ve also [told] landowners we would be willing to put in fencing that would help with protecting properties from the noise of Fordham.”

While he says the neighborhood’s alternate plan of a shared street is an option for the project, Webster says he believes a downside is how greenway users would have to navigate away from Fordham and back to reach the connection to Willow Drive.

“If you are on foot, it would be a fairly significant detour to walk up [Ridgefield Road], go through the neighborhood, and then come back to Fordham. I’m just not sure how successful that would be from the perspective of a pedestrian. I personally don’t think it would affect bicycles much, but pedestrians I’m not sure.”

Combs and Stahl feel differently, which is why they signed a petition the neighborhood plans to submit to the Town Council at its November 13 meeting. Combs says she hopes it will lead to a town representative visiting Ridgefield and Hickory Roads to see how effective a shared street would be.

“What we’re asking the Town Council to do is to take a closer look at the situation the neighborhood is dealing with and do a little bit more due diligence,” Combs says, “[instead of] putting all this money into a project that we don’t think is necessary and we think will increase the risk of a collision between a motorist and [a path user.]

Webster says the Fordham Boulevard Side Path project has no current timetable beyond its design stage.