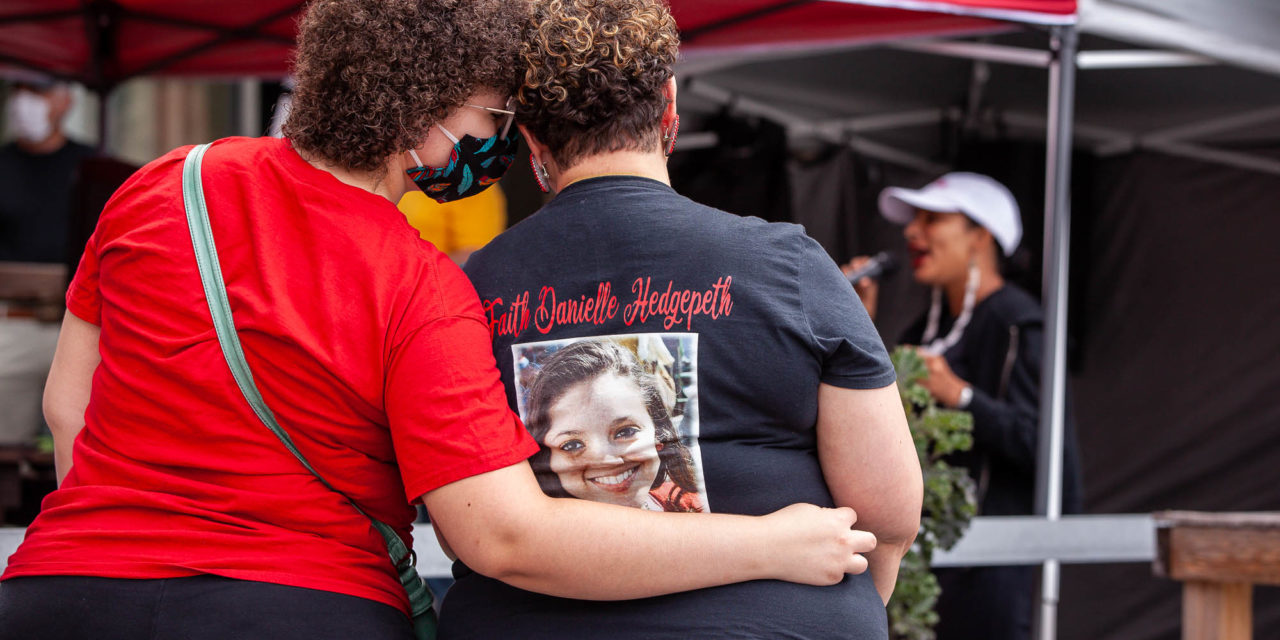 That’s how the emcee began Raising Our Voices, an event held Sunday outside the Vecino Brewing Company in Carrboro. The event honored the memories of indigenous women and girls who were murdered or gone missing, aiming to raise awareness of an issue that has endured hundreds of years.

The story of Faith Hedgepeth is one of those that continues to be unsolved. The third-year UNC student who was killed nearly eight years ago, was a member of the Haliwa-Saponi tribal community in Warren County, North Carolina.

Hedgepeth’s death was the most local case highlighted at Sunday’s event, with family members present to share her story. On September 7, 2012, Chapel Hill Police began investigating her murder after Hedgepeth’s body was found beaten to death in her apartment. The department has had ongoing assistance from the State Bureau of Investigation since 2013. Files regarding Hedgepeth’s death, the crime scene and ongoing investigation were unsealed by a court in 2014, but so far, the revealed evidence has not led to any arrests in the case.

Hedgepeth’s mother, Connie, spoke on Sunday. She shared the challenges and difficult emotions she experiences over Faith’s death, voicing frustration like others who spoke about relatives and friends with unsolved murders.

“I could never do what she’s done in just 19 years,” said Connie when talking about Faith’s accomplishments. “But the thing is, she wasn’t finished.” 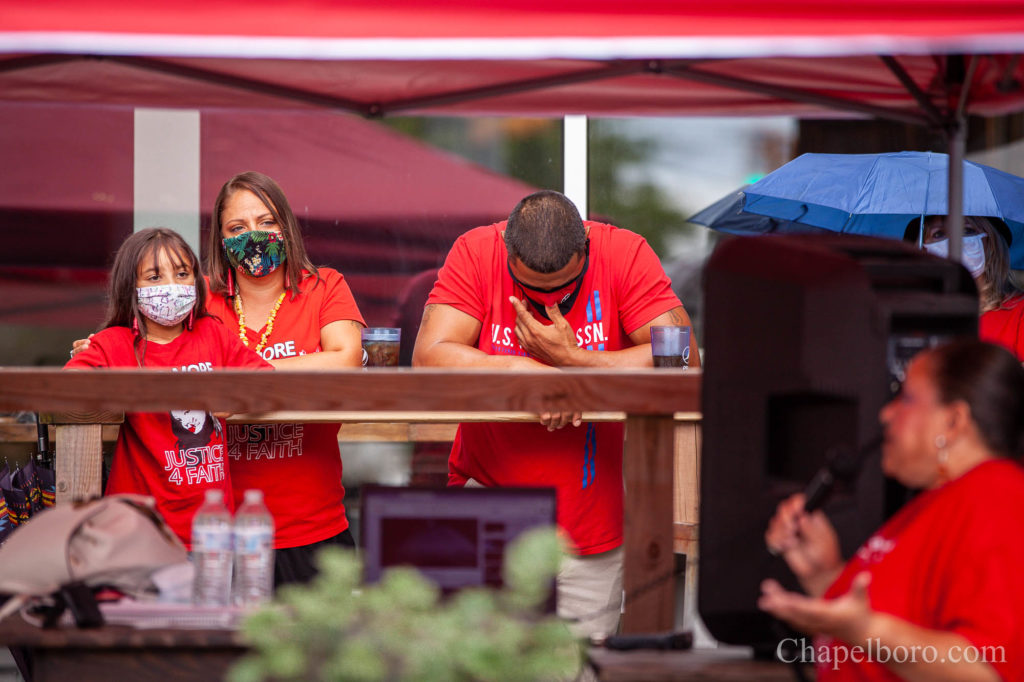 A listener bows his head outside of Vecino Brewing Company in Carrboro, as speakers urge for more recognition of indigenous women who have been murdered or gone missing. (Dakota Moyer/Chapelboro.com)

Hedgepeth’s case is not unique. According to the Urban Indian Health Institute, murder is the third-highest cause of death among American Indian and Alaska Native women and girls aged 10–24. Many cases are not properly logged or do not result in the arrest of those responsible. Logging the cases of missing indigenous women is an issue too, with The National Crime Information Center reporting just 116 of 5,712 reports of missing American Indian and Alaska Native women in 2016 were put the U.S. Department of Justice’s federal missing persons database.

Others lamented this on Sunday, including Jane Eagleheart Jacobs. A member of the Tuscarora nation, she serves on the board of the Missing and Murdered Indigenous Women of NC Coalition, who helped organize the event. Jacobs said her sister, Katina Locklear, was killed in 2018. While Locklear’s killers were caught, Jacobs remembered those whose killers have not been caught and called for action.

“Our people are missing and they’re somewhere. We need to never stop fighting for them and for the rest of my life, I’m going to say Katina’s name. I’m going to say Faith Hedgepeth’s name, I’m going to say Christina Bennett and Megan Oxendine and Rhonda Jones. They deserved to live, each and every one of us deserve to live.”

One way MMIW is advocating for change is improved legislation, both on federal and state levels. Creating databases to properly track missing persons cases of indigenous people and proper resources to collect evidence are some of the few examples the group is working to achieve.

Aminah Ghaffar also is involved with the state coalition of MMIW. On Sunday, she was critical of recent actions by the North Carolina General Assembly that attempted to change access to death records. While the measure failed, Ghaffar said she believes it is important to hold elected officials at all levels accountable.

“This is another indication of how colonial constructs are defining who is native and who is not native, who is important and who is not important,” said Ghaffar. “Based on these arbitrary constructs created by our oppressors, they get to pick and choose whose lives matter.”

Hedgepeth’s story will continue to go on beyond Sunday’s event and even the upcoming anniversary of her death. Derek Smith and Keenan Knight helped organize Raising Our Voices with the MMIW as part of an upcoming podcast called The Lost Voices. According to Smith, the series will feature details about Hedgepeth’s case. While he said the two Los Angeles-based producers may not bring any new evidence to light, it’s an effort to help others learn about what Smith called a national epidemic.

“What we’ve been told is four out of five indigenous women are assaulted during their lifetime,” he said. “That’s a pretty startling number. [The podcast series] is something where if we can help bring awareness to that number, that’s all we can ask for.”

More information about the Missing and Murdered Indigenous Women of NC Coalition can be found on the group’s website.