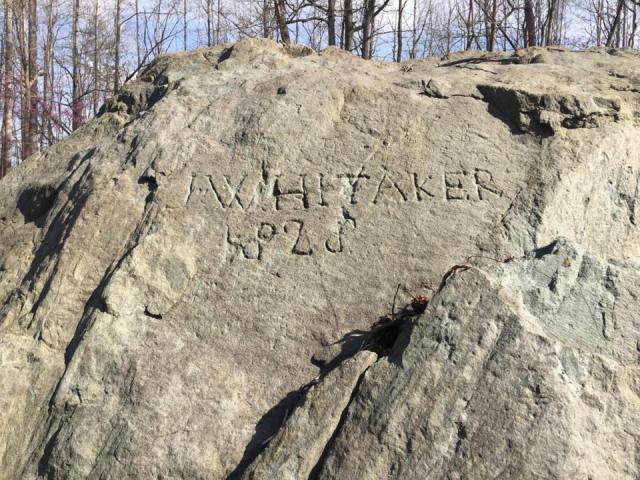 Update: After receiving more than 1,500 signatures on a petition, the developer of Tupelo Junction and the Mayor of Mebane confirmed to the Mebane Enterprise on Wednesday that the longstanding Stagecoach Rock will not be destroyed. According to J. Allen, who started the petition, “The rock will not be destroyed and will remain in place as it has for millenia, and hopefully for all future generations of Mebanites!”

Editor’s note: This story has been corrected to clarify that Stagecoach Rock backs up to the future Tupelo Junction development, not the adjacent Stagecoach Corner development.

A historic rock near downtown Mebane is at risk of being destroyed as a new housing development is built.

At the corner of Lebanon and E. Stagecoach Road, stands a massive rock with centuries of historical names carved into it, dating all the way back to the early 1800s. The most prominent name features J. Whitaker, with the date 1828 etched on the front.

According to legend, Whitaker tragically died when his stagecoach, which was rolling downhill towards Hillsborough, hit a bump in the road and spooked the horses, causing him to be thrown against the rock and killed. It is said Whitaker was buried at the site, with locals engraving his name and date of death on the stone.

The stone is listed on Cemetery Census as a grave.

Since that day, even more names have been engraved into the stone – including the name B. H. Mebane, along with the date 1906.

Longtime Mebane resident Gary Clark, who started researching the mysterious rock 20 years ago, said he believes this name has a direct tie to the city’s namesake.

“There’s a lot of names on this rock,” Clark said. “B. H. Mebane – Banks Holt Mebane – he, in my research, I tie him in to being the great, great nephew of Alexander Mebane, which the town of Mebane is named after.” 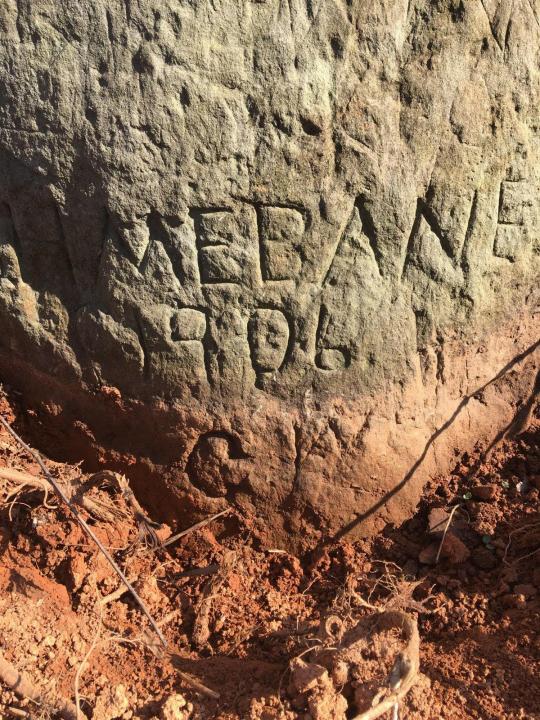 The carving of B. H. Mebane into the Stagecoach Rock. Clark said names carved near the base of the rock indicate that even more names could be hidden beneath the ground. (Photo courtesy of Gary Clark)

However, the fate of the landmark is now uncertain with the ongoing construction of Tupelo Junction – a new housing development featuring 181 single-family homes at the corner of Saddle Club and Lebanon Roads.

Currently, the rock sits on the edge of one of Tupelo Junction’s future entrances, which could be a hindrance to future construction and driver accessibility.

When the development was first proposed, research was done by the city to see if the rock could be moved or protected. Mebane City Manager Chris Rollins told the Mebane Enterprise, though, the rock was found to be “immoveable.” While Clark is unsure that is the case, he thinks developers could get creative to persevere the piece of history.

“Move the road,” Clark said. “Move the entrance a little bit. I mean, the rock has had been there since the beginning of the town, I think they should move the road, “[It’s] easier to move the road, put a guard rail up, you know, make it the centerpiece of the neighborhood.” 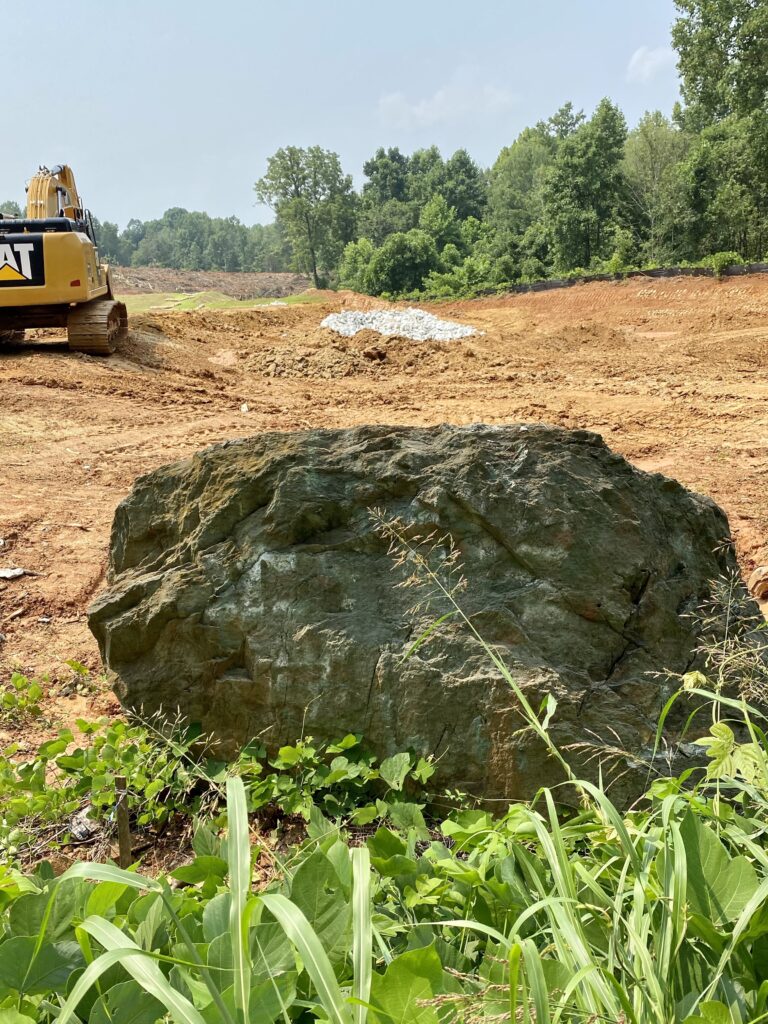 A photo of the Stagecoach Rock in front of the now-underway Tupelo Junction development.

As reported by the Mebane Enterprise, while a 2019 letter from the North Carolina Department of Natural and Cultural Resources states it is “aware of no historic resources” which would be affected by the Tupelo Junction development, Clark disagrees.

He said he found a name even older than J. Whitaker, dating all the way back to 1817. Anything that rich in history, he said, has a right to stay.

Ultimately, Clark wants Stagecoach Rock to be moved and preserved, however, if this can’t happen, he hopes the City of Mebane will at the very least properly document the names engraved for posterity’s sake.

“That’s my main goal is to get the people to know about this thing, because once it’s destroyed, it’s gone,” Clark said. “We can read about it in books and newspaper articles, but people really need to know about this rock that’s part of their history.”

Many residents alongside Clark are trying to save Stagecoach Rock, and have since put together a petition with more than a thousand signatures – even going so far as offering to make room for the stone in their own yards. 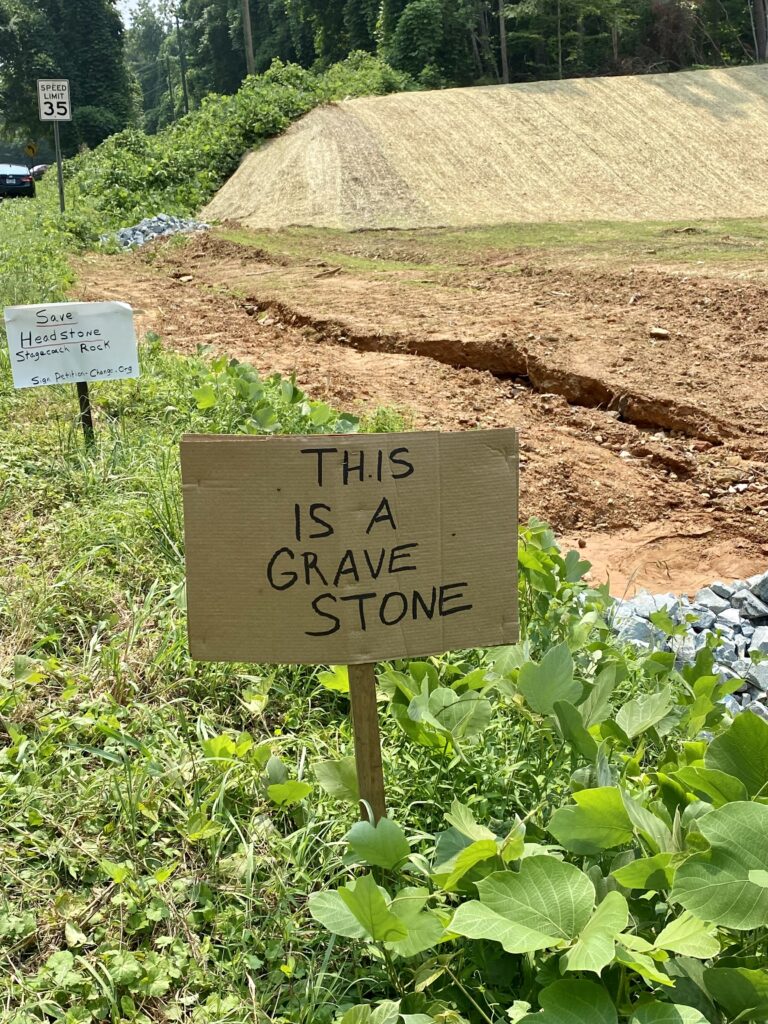 Several signs line the development site, advocating for the Stagecoach Rock to be preserved and for residents to sign the petition.