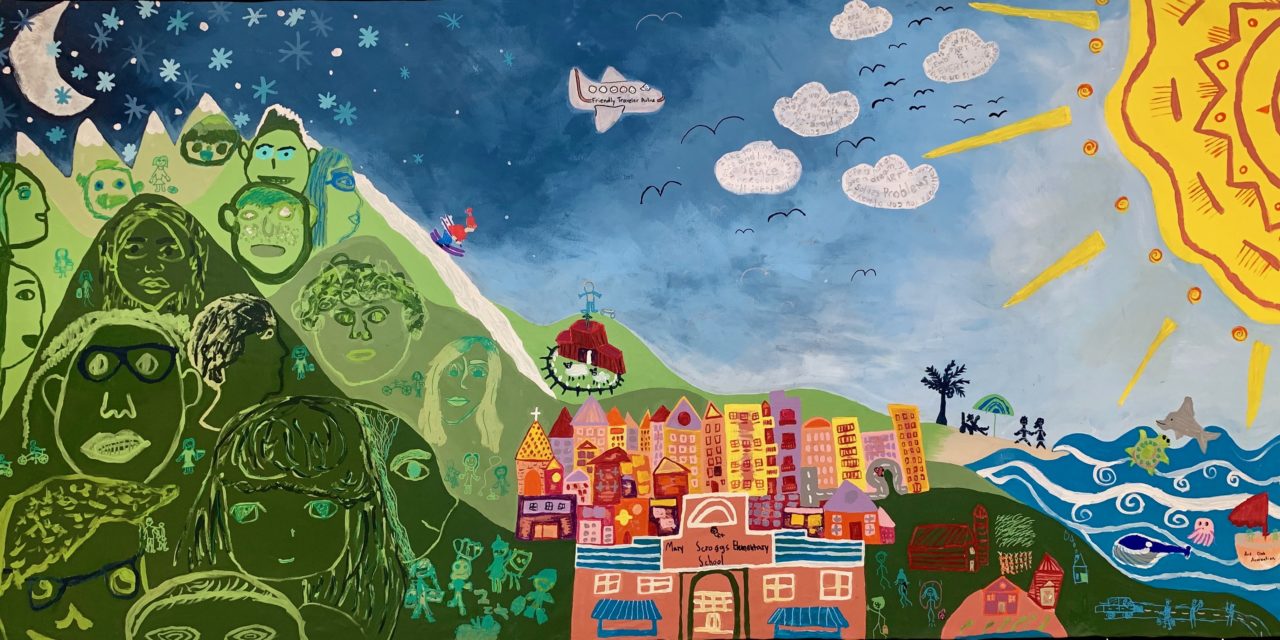 Sarah Cornette is an art therapist and former teacher at Mary Scroggs Elementary in Chapel Hill.

Her project, “Same Difference: The Mural,” is an evolving work of art that seeks to make connections with children across the globe in the face of the ever-worsening refugee crisis.

She said the inspiration for the project started right here in Chapel Hill at her diverse elementary school.

“I started noticing that the kids weren’t really mixing too much in my classes and in the school in general, so I started trying to think of ways that we could bring the kids together and collaborate to create big-scale community art projects,” said Cornette. “By doing that, I noticed that I was actually creating community through the making of the art.”

After the 2016 presidential election, Cornette saw a growing fear among her refugee students.

This acted as the catalyst that led her to apply for a Fulbright Scholarship and take her traveling mural project, which she had started with her students, to Greece.

“I picked Greece because it has some parallels to our country,” said Cornette. “Recent economic crisis, massive numbers of refugees going through rising nationalism in reaction to this incredibly, dynamically changing social environment. I thought maybe they had some lessons for me to learn.”

Cornette continued the mural with children in Thessaloniki, Greece, where she found a noticeable lack of refugee students despite the fact that millions of refugees had already come through Greece at the time.

She then traveled to Samos, home to an infamous refugee camp near Greece’s border with Turkey, to add another patch to the mural with the refugee children she met there.

Despite the horrible conditions and overcrowding of the camp, Cornette said she found optimism in the children.

“They were really hopeful kids, that’s what blew me away,” said Cornette. “They were full of hope and joy and felt like they were on a journey that was going to end really well.”

Now, the mural will grow to add another patch from children in a refugee camp in Ciudad Juarez, Mexico, where some of the worst conditions of the crisis at the US-Mexico Border can be found.

“I couldn’t let it end in Greece when we are dealing with the exact same issues right now, here, and how we’re handling the border crisis,” said Cornette.

With the help of a watchdog group based out of El Paso, Texas, called Hope Border Institute, Cornette hopes to illuminate the terrors and injustices being committed at the border while providing a voice to people that need it the most.

She said, shortly before departing for El Paso, that she really didn’t know what to expect.

“Whatever they make, in whatever form, it’s going to be something really meaningful, but I have no idea what it will be because this is all child driven,” says Cornette. “I use my skills to help them come to an agreement and then make it happen.”

For more information, including photos of the mural, visit samedifferencethemural.com.