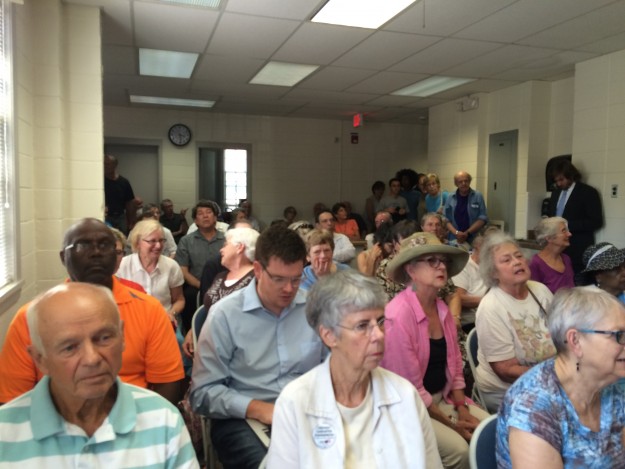 As it turns out, the majority and minority early-voting plans presented at the Orange County Board of Elections meeting last week will not be the only ones going before the state board for ultimate approval.

The local board had a 2-1 split when discussing plans at its meeting last week that was attended by a crowd of Orange County residents asking to extend early-voting hours. Because there was no unanimous approval, the dissenting member is allowed to submit a minority plan to be considered by the state board.

Neither plan included Sunday hours, much to the dismay of many of the attendees, but the majority plan included five sites for early voting and a total of 569.5 hours.

Republican board member Bob Randall objected to the compromise between the board’s other Republican member and only Democrat. The plan Randall is planning to submit to the state board includes 530 hours of early voting.

But now two other plans will be submitted to the state board, local Board of Elections director Tracy Reams confirmed late Tuesday.

Reams said a miscalculation of early-voting hours had occurred as the compromise was reached at the end of last week’s meeting, which exceeded two hours. She said no other compromise could be reached on another plan and, therefore, the two members who originally agreed to the compromise would be submitting their own early-voting plans to the state board.

Local board chair Kathy Knight is submitting her plan that calls for 545 hours and Jamie Cox, the lone Democrat on the board, is submitting a plan with 739 hours of early voting, including on Sundays.

Reams said the two new plans would be submitted to the state board by Thursday’s deadline.

While it’s commonly known as the Voter ID law, another provision limited early voting to 10 days. When the federal court struck that provision down, boards had to gather in order to approve a new 17-day early-voting plan.

At the meeting last week, several Orange County Commissioners said that the county would allocate whatever funding was needed to offer an extended early-voting schedule.

Republican members of local boards have received extra attention when approving new plans after several Raleigh media outlets obtained copies of a memo from North Carolina GOP executive director Dallas Woodhouse reminding board members that “as partisan republican appointees they have duty to consider republican points of view” on early voting. That memo went on to remind board members “there is no requirement to be open on the weekends except for the last Saturday.” The memo also encouraged boards to not include Sunday voting.

When striking down the Voter ID law, the federal court criticized the law because the “new provisions target African Americans with almost surgical precision.” The court also said it could only conclude the legislature “enacted the challenged provisions of the law with discriminatory intent.”

There is no word on when the state board will hold a hearing for the four Orange County plans to be considered.

The original compromise will still go in as the preferred plan because it was voted on in an open meeting, but the three board members will have a chance to vouch for their individual plans as well.

Orange County Democratic Party chair Matt Hughes issued the following statement after the news of the additional plans was made public.

“It is disappointing that a majority of Elections Board members would support alternative plans that could potentially reduce the number of hours that were approved just last week, especially after a good faith compromise vote in full view of the public. The Orange County Democratic Party will be submitting a letter to the State Board of Elections asking them to consider Democratic Member Cox’s plan expanding the number of sites and hours for the 2016 General Election, consistent the Fourth Circuit Court of Appeals’ recent ruling on North Carolina’s election laws, the increasing number of Orange County citizens choosing to cast their ballots during the early voting period, and also the wishes of nearly 100 attendees at last week’s meeting.”