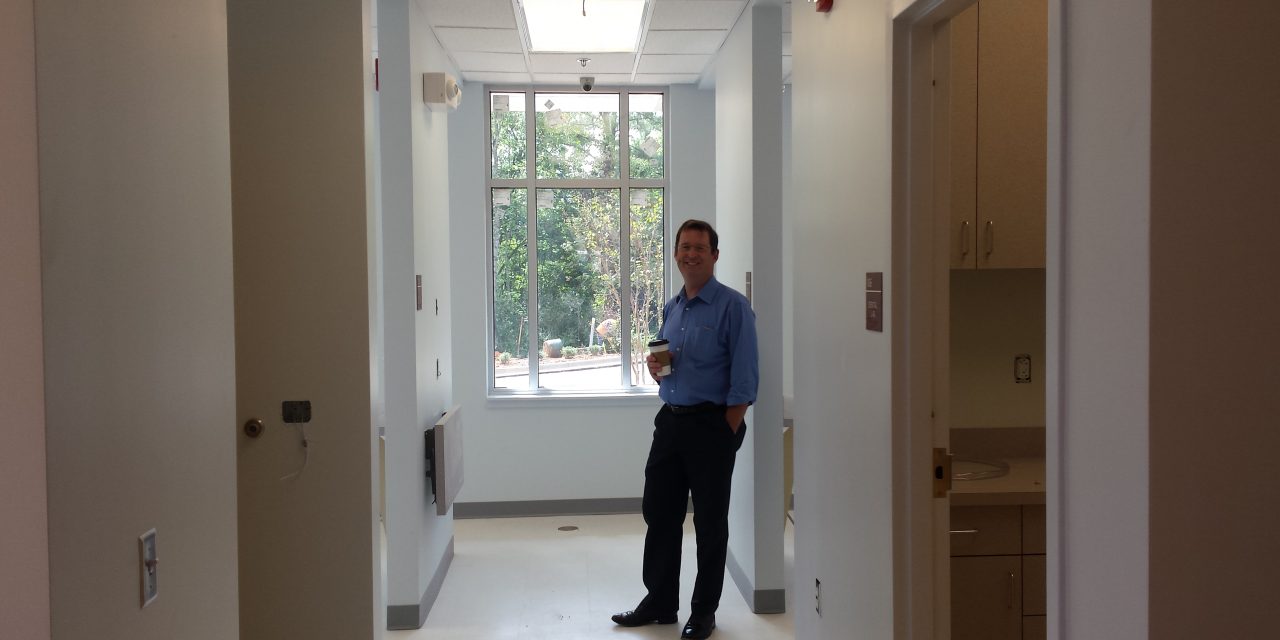 With the opening of the new Community House, the Inter-Faith Council hopes to change how Orange County helps the homeless.

“I believe that architecture reflects how we live our lives, and if we can design a building helps people move to where they want to go, there’s a much better chance that they’ll be able to take those steps and be successful,” says IFC Executive Director Michael Reinke, talking about the new facility that will house 52 men while they transition from homelessness to permanent housing.

“They’ll be working a plan. Everybody will have a plan to say, ‘How am I going to get to a point where I can have permanent housing?’ or ‘I can be living on my own.’ For some folks than might be as short as a couple of weeks or a month. For some that may take as long as a year.”

As clients move through the program and meet progress goals, they’ll get rewarded with more personal space and autonomy. At the start, men will stay in dorms with seven other residents, but by the time they graduate, they’ll be sharing a room with just one roommate and have access to semi-private showers. Reinke notes progress comes with other perks as well.

“When you get to stage three, you get the key to the room,” explains Reineke. “Certainly staff will also have a key, but having that ownership, having to say ‘OK, this is the place where I stay,’ is a significant incentive.”

To get to stage three, residents must work on resumes, job counseling, vocational training, housing plans and health needs. Reinke says the facility was designed with those multiple goals in mind.

“I’ve seen shelters in at least five or six different states, and I’ve probably visited close to 200. I’ve never actually seen a shelter that has a medical clinic housed within the actual shelter, so this is pretty amazing from my perspective.”

There’s also a library, a fitness room, and a separate bathroom for transgender clients.

“As far as we know, we are the only shelter that has a bathroom for people who identify as transgender, so we are incredibly pleased to be able to offer that to Chapel Hill and Carrboro,” says Reinke.

Those amenities are made possible by community partnerships. The medical and dental clinics will be staffed by doctors, nurses and dentists from Piedmont Health. The fitness equipment was donated by the Carol Woods retirement community, and the State Employees Credit Union Foundation donated $1 million dollars to kick off construction of the building as a whole. In addition, individuals volunteer time and skills for everything from meal preparation to job counseling.

Reinke says the new location is a big improvement on the current Men’s Shelter at the corner of Rosemary and Columbia streets.

The new space off Homestead Road also means the organization will take a different approach to housing the homeless, focusing on transitional housing more than immediate shelter. The old location doubled as an emergency shelter where homeless men could drop in as needed, but at the new Community House, only residents enrolled in the program will stay there on a regular basis. There’s space for 17 drop-ins during periods of extreme cold weather, but that’s all.

Former Executive Director John Dorward says the IFC will be looking to other community partners to step up this winter when the temperature drops.

“Last winter we averaged over 20 people per night,” says Dorward. “Normally that would be enough, but a couple of the shelters in Durham have cut back a little on what they will do on emergency or ‘white flag’ nights. So there may be some times when there are extra people. We’re not quite sure how that will be handled yet, but we’re sure the community will step up and we’ll find a way to handle that.”

Those 17 emergency beds were a major point of contention when the IFC sought approval for the new site from the Town Council. Neighbors worried the shelter would draw crime to the area, and that those turned away from the shelter would stay in nearby parks instead. Reinke says the IFC has been working to build relationships with neighbors. The organization has set up a hotline to respond to any reported problems.

If you’d like to take a look at the long-awaited facility, the ribbon-cutting for the new Community House is Monday, September 21 at 8 a.m., followed by a reception and open house. Reinke says everyone is invited.

“I have never seen a building that has the kind of resources that we’ll be able to offer here at the Community House. You’re going to see all the things that you would hope for in a shelter; you’ll see bright rooms with lots of windows. But you’ll also see some really amazing things that will help provide people the resources they need to get back on their feet for permanent housing.”

You can find out more here.