Facts And Myths (That McCrory Forgot) About House Bill 2

On Wednesday, March 23, the North Carolina General Assembly passed House Bill 2, in response to a Charlotte ordinance banning discrimination on the basis of sexual orientation and gender identity.

Lawmakers who supported the bill insisted they only wanted to overturn one part of that ordinance – people were worried it would lead to men in dresses barging into the ladies’ room – but the actual bill they passed was much, much broader.

To put it mildly, there has been a bit of a backlash. Dozens of businesses have publicly denounced the bill. The NCAA is hinting that it might not host championship events in North Carolina anymore. The NBA suggested it might move the 2017 All-Star Game out of Charlotte. The mayor of San Francisco just banned town staff from traveling here on the public dime. And on and on.

So now Republicans are in damage control mode. On Friday, Governor Pat McCrory released a statement called “Myths vs. Facts,” in the form of a frequently-asked-questions page, to counter some of the criticisms. (They really want to make sure this gets out. We at WCHL have received this same statement three times already, from three different state departments. Others have reported receiving it as many as eight times.)

You can read it here.

Give him credit! McCrory’s FAQ page gets a couple things wrong – for instance, he says “nothing changes in North Carolina cities,” which isn’t right, and he says the bill doesn’t “take away existing protections for individuals in North Carolina,” though in fact it does – but in general, most of what’s there is technically correct.

Only thing is, he forgot a few questions.

So let’s take care of that.

1. Now that House Bill 2 has passed, is it legal to discriminate against gays and lesbians in North Carolina?

Here’s the full text of the bill, if you want to read it for yourself.

2. What does that mean in practice?

3. If someone wants to discriminate against gays and lesbians, do they have to claim a “sincere religious objection,” like in the Indiana law last year that caused such a fuss?

No. State law allows people to discriminate against gays and lesbians for any reason they like.

4. Was that just an oversight?

No. A State House member proposed amending the bill to include sexual orientation as a protected category, but the House explicitly decided not to do so.

5. Is this a change from before?

Not on the state level. But there were local ordinances in towns and counties across the state that banned discrimination on the basis of sexual orientation – and House Bill 2 “supersedes and preempts” those local laws, so they all got wiped out overnight.

No. House Bill 2 explicitly forbids them from doing so. (Local governments are free to decide how they want to hire and fire their own employees, but that’s it.)

7. Are there other categories that are no longer protected?

Yes. Orange County, for instance, had an ordinance banning discrimination on the basis of veteran status and familial status, but that’s been wiped out too.

8. So you can be discriminated against for being a veteran now?

Not quite. There is a federal law that bans discrimination against military veterans, so you’re still covered there. If you do experience discrimination for that reason, though, you can’t seek redress at the state level – you have to go through the federal system, which is harder and costlier.

10. No, seriously. Can I ban Republicans from eating in my restaurant?

Well…actually, yes. But not because of House Bill 2. Party affiliation has never been a protected class, so technically you’ve always been able to do that.

11. Has anyone tried doing that?

Not to my knowledge. But I think if you ask a Republican, they’ll tell you half of Carrboro’s been doing it for decades.

Hey, you try being a Republican in Carrboro.

13. All right, back to being serious. House Bill 2 bans discrimination on the basis of…what again?

14. Okay, suppose I get discriminated against for my religion. I can still sue, right?

According to sections 3.2 and 3.3 of the bill, “no person may bring any civil action” if they experience discrimination, even when it comes to the categories where discrimination is explicitly banned. So no, you’re not allowed to sue in state court.

17. Are there any other states that do that?

18. Literally the only other state is Mississippi?

Yes. North Carolina and Mississippi are now the only states in the US that do not allow you to sue in state court if you experience discrimination.

Well, you can still sue in federal court, if it’s a category that’s covered by federal law. But again, that’s much harder and way more expensive.

20. Is there anything I can do on the state level?

Look, why are you focusing on all this discrimination stuff? This bill is about sickos in bathrooms, remember?

23. Okay, fine. Let’s go there. What exactly is House Bill 2 supposed to protect us from?

House Bill 2 protects us from sexual predators who might claim to be “transgender” in order to go into women’s restrooms and commit acts of peeping or even assault.

24. Isn’t there already a law against peeping and assault?

Yes. But sexual predators can’t be trusted to obey the law.

25. But they can be trusted to obey this one?

26. So, evil people will break all kinds of laws, but they’ll obey a little sign on the door. Isn’t that basically the same dumb logic conservatives rail against when we talk about gun-free school zones?

Hey, you liberals are being inconsistent too, you know.

27. Fair enough. There are already more than 200 cities in the US that allow people to use the restroom that corresponds with their gender identity, like Charlotte was trying to do. Has this been an issue in any of those cities?

No. There was one guy in Seattle who went into a women’s locker room, apparently as a form of protest (he was dressed as a man and never claimed to be transgender), but other than that, there have been zero reported incidents.

28. So all this is because people are worried that something might happen, even though it’s never happened in 200 other cities?

29. Great. Okay, so let’s talk about enforcement. If all these people want to use the restroom, where will they have to go? 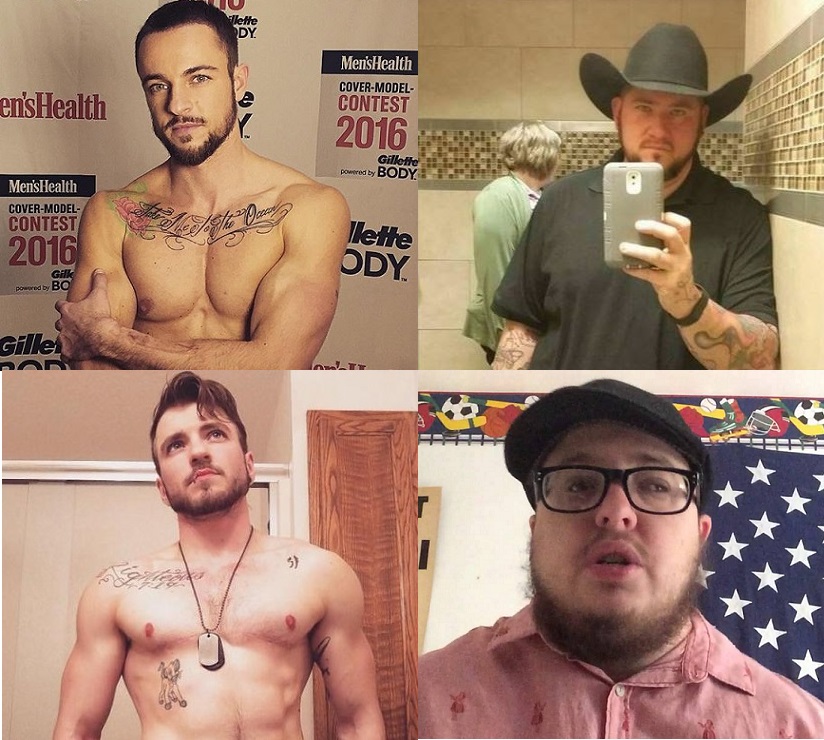 Biologically, those are all women. House Bill 2 requires them to use the ladies’ room.

30. Wait, really? House Bill 2 requires all of these people…

…to use the ladies‘ room?

Yes. But there is a caveat. If you have a sex change, you can go through the process of having your birth certificate altered. So if those people have had their birth certificates altered, they can use the men’s room.

Think You Can Enforce House Bill 2? Take This Easy Quiz!

31. But if they haven’t? They’d be required to use the ladies’ room?

Yes. For your safety and protection.

33. So how are we planning on enforcing this?

They didn’t really think that far ahead.

Yes. As long as your son is under seven, you can bring him into the women’s room.

35. Glad they thought of that, at least.

Oh, they actually didn’t. The original bill didn’t have that exception. It was added as an amendment after a state legislator brought it up.

Then he’ll have to go into the men’s room by himself, or else wait outside alone while you use the women’s room.

37. I have to leave my son standing there alone outside a public bathroom?

Yes. For his safety and protection.

38. Why did they make seven the cutoff age, anyway?

Why are you asking so many questions?

39. This all seems ridiculous.

Don’t you go making this a birth control thing.

41. Is House Bill 2 even constitutional?

Good question. In Romer v. Evans (1996), the Supreme Court struck down a Colorado law that banned local governments from protecting gays and lesbians from discrimination. That’s because the law treated gays and lesbians unequally, in violation of the Equal Protection Clause. The justices said Colorado only needed to provide a “rational basis” for the unequal treatment, but they couldn’t find one.

House Bill 2 basically does the exact same thing that Colorado’s law does, so there’s a chance the Supreme Court will rule the same way. On the other hand, Colorado’s law explicitly singled out gays and lesbians by name, whereas House Bill 2 just omits them from a list of protected classes. So the Court may rule differently here. (Two other states, Arkansas and Tennessee, also have similar laws that ban local governments from protecting gays and lesbians.)

Either way, there will definitely be a lot of litigation over this, and the state will have to pay a lot of money to defend it in court.

43. Is there anything good about this bill?

Why yes. House Bill 2 establishes a uniform statewide anti-discrimination policy, so the law is now exactly the same from city to city.

Glad you asked. We’ve covered Part 1, which deals with bathrooms, and Part 3, the anti-discrimination stuff. I haven’t even mentioned Part 2, which bans local governments from passing living wage ordinances or regulating hours, benefits, and a bunch of other stuff.

Yes, “such as the wage levels of employees, hours of labor, payment of earned wages, benefits, leave, or well-being of minors in the workforce.”

47. What does any of that have to do with sickos in bathrooms?

No. Let’s be honest, we all knew they were going to do this.

49. Will the General Assembly ever call a special session to bring teacher salaries up to the national average?

EDIT: Thanks for all your comments! I’ve edited the FAQ list to fix one error: a reader pointed out that HB2 actually does make an exception (sections 1.2d and 1.3d) for caregivers who enter an opposite-gender restroom to assist someone with a disability.

Another reader noted that the U.S. Equal Employment Opportunity Commission (EEOC) has ruled that the federal ban on sex-based discrimination also includes discrimination on the basis of sexual orientation and gender identity – so if you’re fired for being gay or transgender, you can (currently) file a claim on the federal level with the EEOC. That’s a matter of statutory interpretation, though, not the law itself: federal law still doesn’t specify sexual orientation or gender identity as protected categories, so the EEOC could change its interpretation at a later date (say, with the next presidential administration). This is also a subject of ongoing litigation, so a court could overrule the EEOC in the future too.

In any event, the EEOC only covers employment – so regardless of how they happen to interpret the law, businesses can still refuse to serve you for being gay, anywhere in the state of North Carolina.