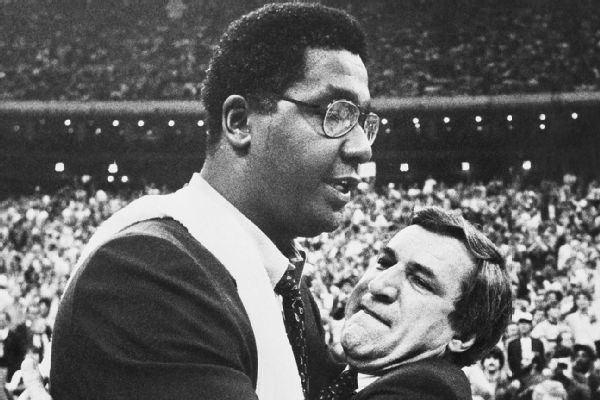 Dean Smith’s relationship went back to John Thompson’s days as a high school coach at St. Anthony’s in the nation’s capital.  Thompson sent his adopted son, Donald Washington, to play for Smith and the Tar Heels as the third African- American in the UNC program after Charlie Scott and Bill Chamberlain. Although Washington left school midway through his sophomore season, Thompson and Smith became close friends. And Smith tabbed Thompson as an assistant coach on the 1976 U.S. Olympic team in Montreal.

Six short years later, after Thompson had taken over at Georgetown and was building an imperious program, the dear friends met in the 1982 national championship game at the Super Dome in New Orleans. The Tar Heels won a classic, and there were Thompson and Smith hugging afterward, the protégé truly happy that his mentor had finally won the big one.

A foot taller and from a far different background, Thompson stood for almost everything Smith stood for. And Big John was even more outspoken about causes than was the measured Smith. But they became closer than anyone ever knew. Supposedly, when the phone rang after 10 pm in the Smith home, the family knew who was calling, and the conversation often went on for hours.

Thompson was a champion on the court and a champion for his race, and his tough love and demands on his players getting an education were so similar to you know who. When the U.S. Basketball Writers launched the Dean Smith Award last spring, UNC Senior Associate Athletic Director Steve Kirschner predicted Thompson would be the first recipient for those very reasons. Demanding and loving all at once. And both Hall of Famers could really coach.

“It hit a soft spot in my heart, when I heard I was being considered,” Thompson said. And he added that, in his long life, he has never known a man quite like Dean Edwards Smith, who would be so happy that Big John was a charter member of his new club. Thompson turned 74 last week and is still heard on NCAA tournament radio broadcasts. Behind the scenes, he helps the game of basketball and the kids who play it and the men and women who coach it.

Just as the man for whom the Dean Smith Award is named did until he no longer could. A $100 per plate dinner for the Opening Doors Fund will be held here on November 10 to present the first award. Appropriate because both men opened so many doors for so many.