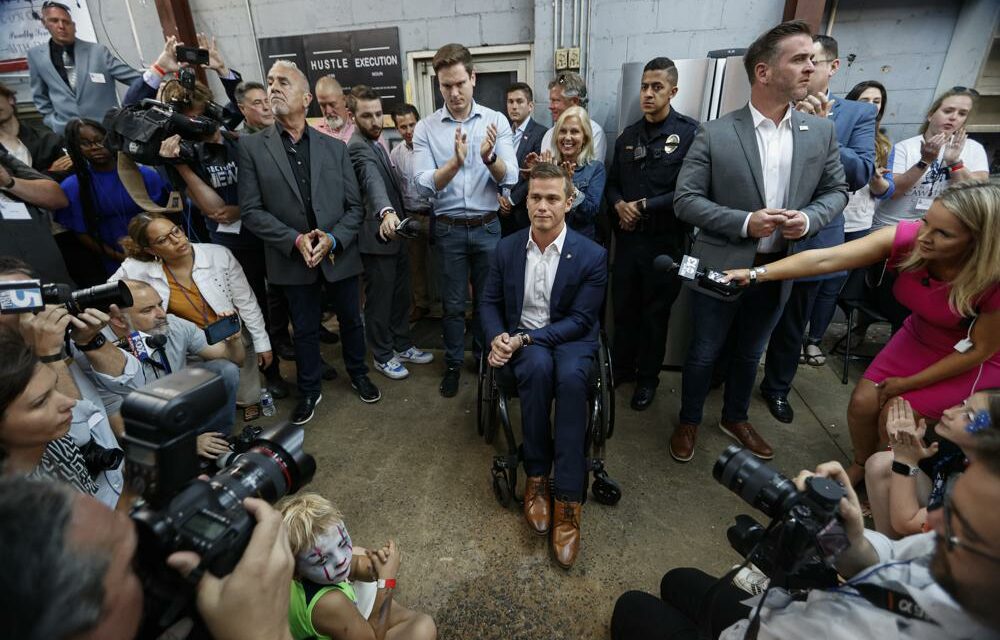 In the Pennsylvania governor’s race, a candidate who has spread lies about the 2020 vote count won the Republican nomination, putting an election denier within striking distance of running a presidential battleground state in 2024.

Meanwhile, former President Donald Trump’s support was enough to elevate his Senate candidate to victory in North Carolina on Tuesday, though his pick in Pennsylvania remained in a tough fight in that state’s Senate primary. And in Idaho, with incumbency on his side, the sitting governor weathered a Trump-backed primary challenge from his far-right lieutenant governor.

In a key congressional race, a Republican congressman’s bad behavior finally caught up with him.

TRUMP WINS SOME, LOSES SOME

The former president entered the primary season on a high after JD Vance, his endorsed candidate in Ohio’s hypercompetitive GOP Senate contest, shot from third to first. But Trump’s tally Tuesday night included wins, losses and a marquee race too early to call.

And in Pennsylvania’s GOP race for governor, Trump’s endorsed candidate, the far-right Doug Mastriano, easily won the nomination — though he was already well ahead in the polls when Trump weighed in just days before the primary.

His nod was widely seen as an effort to hedge his bets and guarantee a victory in the state in case his endorsed candidate for Senate, celebrity heart surgeon Dr. Mehmet Oz, loses his race. Oz and former hedge fund CEO David McCormick were virtually tied early Wednesday, with more votes left to be counted.

In North Carolina, meanwhile, Rep. Madison Cawthorn lost his reelection bid Tuesday even after Trump urged voters to “give Madison a second chance!” Trump also whiffed when Idaho Lt. Gov. Janice McGeachin, his pick, failed to defeat Gov. Brad Little in that state’s primary. Trump is facing down another possible defeat in next week’s high-stakes governor’s primary in Georgia, where his candidate is trailing in both polls and fundraising.

Trump has made election denial a key loyalty test in the Republican Party, and that may have kneecapped his party in Pennsylvania with the victory of Mastriano, a vocal election denier.

Mastriano backed baseless reviews of the election results in Pennsylvania, where Democrat Joe Biden won by nearly 100,000 votes. He organized buses to ferry Trump supporters to Washington for the “Stop the Steal” rally that preceded the Jan. 6 U.S. Capitol insurrection. And he says that if he’s elected, he’ll ferret out fraud partly by making every single voter in the state reregister.

If Mastriano were to win in the fall, he would shape how elections are conducted in Pennsylvania — where the governor appoints the secretary of state, who oversees how elections are run. He has pledged to take the extraordinary step of requiring voters to “re-register” to vote, a move that would almost certainly encounter legal hurdles.

Mastriano was the front-runner even before Trump’s endorsement late last week helped cement his victory. All the major statewide Republican hopefuls in one way or another cast doubt on the election results, but Mastriano was by far the loudest and that’s what won him Trump’s nod.

With Trump prioritizing fealty to his election lies over all else, many Pennsylvania Republicans fear the former president has undermined their chances in the crucial state. That led them to try to coalesce around a last-minute alternative to Mastriano, but the effort failed.

Mastriano will face Democrat Josh Shapiro, the state’s attorney general, in the November general election. Shapiro, who was uncontested, has appeared eager to take on Mastriano, running a television ad calling Mastriano “one of Donald Trump’s biggest supporters,” a move that seemed designed to boost the state senator with GOP voters.

Mastriano has said he wouldn’t have certified Biden’s victory in Pennsylvania if he’d been governor then. That raises questions about the 2024 presidential election and whether Mastriano, if elected, would follow the will of the voters if a candidate he opposes were to win the state.

GOP VOTERS HAVE HAD ENOUGH

Even in Trump’s Republican Party, there are limits.

Rep. Cawthorn, the youngest member of Congress, was ousted from office on Tuesday by state Sen. Chuck Edwards after a rocky first term filled with salacious headlines and scandals. The young congressman, who uses a wheelchair after a car accident, became a media sensation when he first won a House seat at age 25, but he may have gotten singed under the spotlight.

Trump sought to give Cawthorn a boost on Monday, urging voters to keep him in office.

But voters decided not to. Edwards, who was endorsed by Republican Sen. Thom Tillis, inched past Cawthorn in the primary. Still, the big picture wasn’t that close — with eight candidates in the contest, Cawthorn won just 3 in 10 voters in the district. That’s a warning for other Republicans who may feel that Trump’s ability to hold his base’s loyalty through repeated scandals makes them bulletproof, too.

POWER OF INCUMBENCY IN IDAHO

In Idaho, Trump-inspired populism ran smack into the wall of incumbency.

Gov. Little easily beat back a Republican primary challenge from Lt. Gov. McGeachin, despite her endorsement from the former president. He touted steps he’d taken to please conservatives by capitalizing on the benefits of office — signing tax cuts and a law banning abortion after about six weeks.

McGeachin was deeply controversial. When Little traveled out of state, McGeachin proclaimed herself the effective governor and issued executive orders banning mask and vaccine mandates, which he nullified upon returning to the state. She spoke at a conference sponsored by white nationalists and ran with several far-right allies for other statewide offices.

But, in contrast to what happened in Pennsylvania, Republican voters in Idaho balked. It’s a good omen for the next Trump target — Georgia Gov. Brian Kemp, who’s also been using his incumbency to shore up his conservative bona fides against a challenger backed by the former president in next week’s primary.