Exploring Vingroup’s Vast Reach in Vietnam, and What It Means for Chatham County 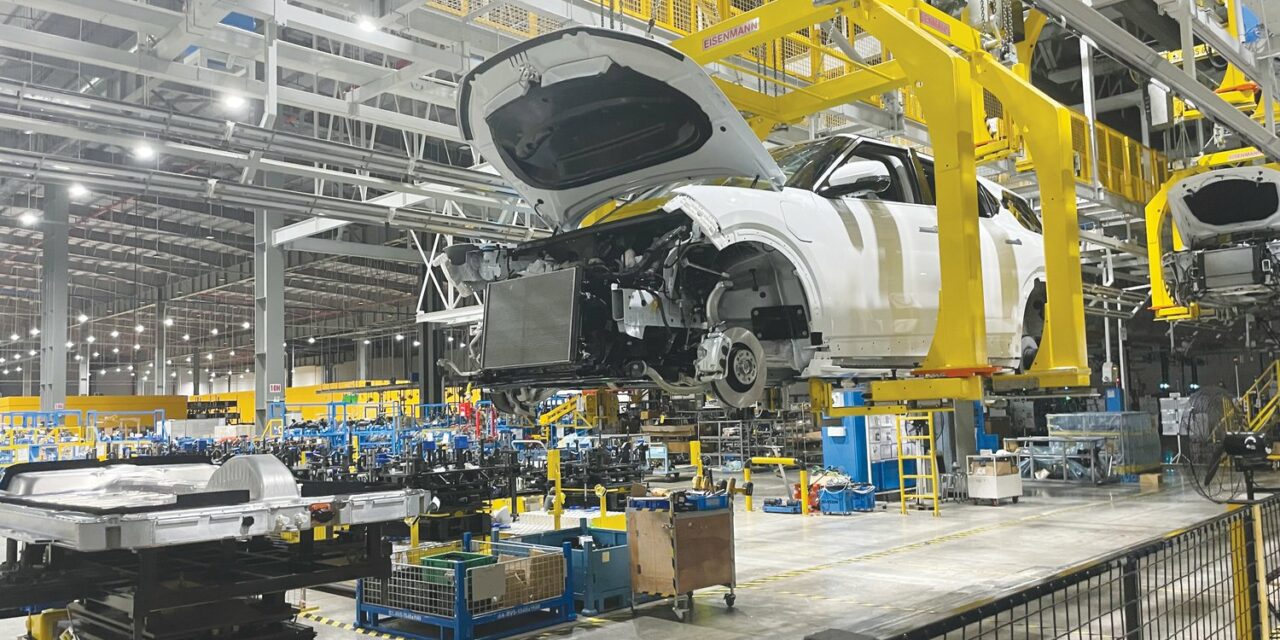 Chatham N+R Editor’s note: Ben Rappaport has just returned from a week in Vietnam touring VinFast’s manufacturing facilities and meeting with company officials. It was part of a VinFast-paid media tour in advance of the electric vehicle manufacturer’s plans to locate a $4 billion plant in Chatham County. This is the first in a series of stories about Rappaport’s experiences.

Dinner cruises along Ha Long Bay, rooftop dinners with fire-breathing performers and five-star hotel stays were all part of an extravagant tour put on last week by Vingroup, the parent company to VinFast.

The News + Record was invited as part of this tour, which included more than 200 media members, social media influencers, investors and VinFast customers from across the U.S. and Canada. Just four of the participants included in the tour were from North Carolina — including two members from WRAL-TV in Raleigh and a freelance electric vehicle reporter from Charlotte.

The six-day excursion — described as the Vingroup Elite Vietnam Tour — provided an inside look at the manufacturing facilities of VinFast and provided visitors the chance to be some of the first in the world to test drive one of the company’s new electric SUVs, the VF-8.

A long journey and an introduction

After a 26.5-hour journey that began last Monday from RDU, via San Francisco, weary travelers landed in rainy and humid Ho Chi Minh City. But even the extensive travel couldn’t dull the excitement of those excited to see the offerings of Vingroup in person.

The young company has exploded in Vietnam under the guidance of its chairman, Pham Nhat Vuong, who is now the country’s richest man. Vingroup is the country’s largest conglomerate, with a total market value of $24.4 billion. Its 2020 revenue accounted for 2.2% of national GDP, and it’s hard to go anywhere in the country without seeing its reach.

So, getting the chance to experience the breadth and magnitude of that reach is a powerful pitch to media and investors who may be skeptical as Vingroup looks to take its branding to the global marketplace.

Members of the tour were given luxury treatment throughout the trip in an effort to promote the brand and generate buzz. The first stop of the trip was at VinPearl Resort in Ha Long. The hotel and spa is on its own island amid Ha Long Bay — a place recognized by UNESCO as a World Heritage site. Attendees then took a dinner cruise along the bay, weaving between serene green islands popping up from the sea. It was a level of high class that came to be expected on the trip.

The beauty of the boat ride was only compromised by what felt like a whitewashed display of Vietnamese culture where visitors learned “traditional Vietnamese crafts,” like conical hat making and tea tastings, which seemed highly reductive of the rich history of Vietnamese art.

Problematic cultural appeals to tourists aside, the thing that stood out immediately about the company is the number of people employed to make this operation function. In the first few hours, tour members interacted with members of the Vingroup global communications team, employees from VinFast’s U.S. public relations firm — Citizen Relations, resort staff and more.

The high employment evident throughout the trip was an encouraging sign as the company, alongside North Carolina’s government officials, has touted high figures for employment at the upcoming VinFast manufacturing plant in Moncure. The plant is expected to deliver on its 7,500-job promise to North Carolina if it wants to receive the full benefit of the tax incentives it has been awarded by the county and the state.

The opening cruise also served as a networking event to interact with many of the executives who are working in Vietnam and abroad to make VinFast come to life. The News + Record met with executives who came from top car brands like Renault, General Motors and BMW who expressed excitement about what VinFast is doing and believed in its ability to become a quality electric vehicle brand in the North American market.

“This is a company that’s going to make EVs and make them for everyone and it’s really exciting to be part of a new venture that I believe in,” said Shaun Calvert, VinFast deputy CEO in charge of manufacturing, who formerly worked at GM. “We are producing a premium product at an affordable price.”

A look inside the VinFast manufacturing complex

Calvert also led the second day of the tour as he walked media members through the manufacturing facility of VinFast.

The 870-acre site in Haiphong was constructed in just 21 months — a massive feat considering the scale and scope of all that VinFast hopes to build at the plant. The site was previously a marshy swampland — a byproduct of bombings by American troops during the Vietnam War. In fact, on Google Maps, the location near the South China Sea still shows the swamp and previous images from Google Earth show the un-utilized and destroyed land — tales of what was.

Now, the once deadland is filled with the whirring of robotic manufacturing machines twisting and welding around every corner. The whole production is 80% automated, but still utilizes more than 6,000 employees in its body shop, press shop, battery plant and general assembly complex. The plant produces all of VinFast automobiles and products, including the SUV models ­— VF-8, VF-9 and VinFast President — the hatchback model VF-34, and electric scooters. Earlier this year, VinFast announced that beginning in August, it will switch to exclusively manufacturing EVs — meaning the President and other internal combustion-engine vehicles will cease production.

The complex also displayed mockups and prototypes of potential EVs built for the near future, including a sedan model — the VF-6 and VF-7 ­— and options aimed at lower price points with cheaper materials — the VF-5.

The numbers produced here are comparable to estimates and goals from VinFast about production in Chatham County. The company plans to start by producing 150,000 electric vehicles annually beginning in July 2024.

Veteran automotive reporters told the News + Record that VinFast provided unprecedented access to its manufacturing facilities with inside looks at the machines and battery operations. VinFast officials said that’s because they were proud of what they had built and wanted to show it off to a large audience to prove they were on the right track as they look to expand.

Michael Johnson, director of VinFast U.S. manufacturing, said the plant seen in Haiphong is similar to the one planned for Chatham County, with some variations. The primary difference is the size. The Haiphong plant is massive and tour members had to take trams to get from shop to shop, but the facility planned for Triangle Innovation Point in Moncure will be more than double in size at a whopping 1,977 acres. The reason for the size discrepancy is that the battery plant for Vietnam is currently located off-site in central Vietnam; in the U.S., the batteries will be produced on-site. The N.C. facility will also include other buildings, including research and development offices and professional development training.

The third day was all about showing off what Vingroup calls its ecosystem. This includes VinHomes, the VinPearl resort, VinUniversity, VinMall and more.

Stops at each of these complexes show Vingroup is building more than just cars in Vietnam — it’s creating a lifestyle brand aimed at the upper class.

VinHomes creates riverside villas near Hanoi with man-made beaches and rivers, extravagant sculpture gardens and private living that contrasts the crowded density of the Old Quarter in Hanoi. The massive conglomerate now has 27 urban complexes and 83 shopping malls across Vietnam.

VinUniversity partnered with the likes of University of Pennsylvania and Cornell University to create an Americanized education system in Vietnam for 400 international students. The school, however, costs more than $35,000 per year, which is comparable to many U.S. universities in a place where the currency has much less purchasing power — essentially making VinU a pay-to-play program for the uber-wealthy.

And looking at the place, they certainly aren’t trying to hide their audience. Massive marble columned buildings, a 30-acre rose garden, special sensory relaxation rooms and a massive fountain featuring the 12 Greek gods with Apollo at the center don’t exactly make it appear like a school for the everyman.

The point of showing off these spectacles of the Vingroup ecosystem was to provide credibility behind the company and show it has its hands in all the right cookie jars to make it a real international competitor.

When making the leap to N.C. and the North American market, however, Vingroup isn’t bringing all those other jars with it. It will only be relying on VinFast to succeed, and whether that’s feasible still remains up for debate.