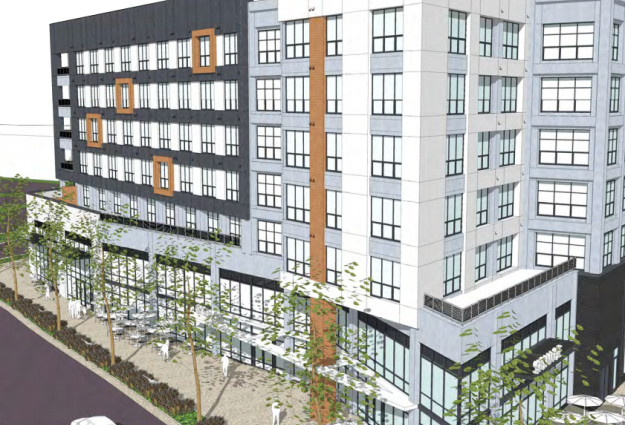 The construction fences are going up on Elliott Road and you’ll now have to look a little harder for a parking space at Whole Foods. Work is beginning on Village Plaza Apartments on the site where the movie theater stood over a decade ago. It’s the first project in the newly-created Ephesus Fordham district, designed to spur redevelopment in the aging and underperforming area, while making the area more walkable and less car-centric.

Before we start enduring the inevitable inconvenience of construction, however, let’s clear up five lingering myths about Ephesus Fordham:

Myth One: These new buildings will make your house flood.

Fact: Ephesus Fordham enacts some of the strictest storm water management standards in Chapel Hill, including requiring all new buildings to meet the Jordan Lake quality standards, even if the site adds no new impervious surface. Village Plaza Apartments, for example, will have a sand filter that will significantly reduce nitrogen and phosphorus loading to Jordan Lake. There were virtually no storm water standards when we paved over the area for parking lots decades ago and, unlike other areas, there are no grandfather clauses that let developers in Ephesus Fordham sidestep these new requirements, even when they’re building on land that was already impacted by previous development.

Bottom line: when it rains, the water that leaves Village Plaza Apartments will flow much slower and contain far fewer pollutants than it does on that site today.

Myth Two: Our schools will be flooded with new students that will cost us too much money.

Fact: Opponents of Greenbridge and 140 West said the exact same thing about those projects.  Do you know how many Chapel Hill Carrboro City Schools students live in those places? Greenbridge has two. 140 West has one. (I’ve met her. She’s a nice kid!) Village Plaza Apartments will, however, provide the kind of homes many young professionals want and, hopefully, help attract more members of this vital demographic back to Chapel Hill.

Fact: Village Plaza Apartments alone will add fifteen thousand square feet of new tax-paying stores and restaurants on its ground floor. Additionally, it is important to remember that businesses, apartment buildings and complexes pay commercial property taxes as well. How much commercial property tax have we generated on that vacant lot in the last decade, again?

Myth Four: The changes in Ephesus Fordham are bad for the environment.

Fact: Really? What environmental awards are all those parking lots winning us today? The fact is, walking is better for the environment than driving, and if you want an area to be walkable, stuff has to be close enough together to walk to it. I guess some folks think it’s bad for the environment to walk to Whole Foods because you’re not driving there in your Prius.

Myth Five: The buildings will be ugly.

Fact: That’s actually an opinion and, like all matters of opinion, one which we can all debate based on our own individual tastes and preferences. Personally, I don’t think Village Plaza Apartments will be the most gorgeous building in town. Last I checked, however, Architectural Digest hasn’t published a photo essay on the old movie theater’s crumbling parking lot, either.

The real question is: will Village Plaza Apartments serve us better than the vacant lot that’s been sitting there covered in weeds for well over a decade? I believe it will.

However, if you still think Village Plaza Apartments is such an eyesore that you just can’t bear to look at it, here’s a suggestion:

Don’t live in it.