The Polar Vortex and Quantum Physics 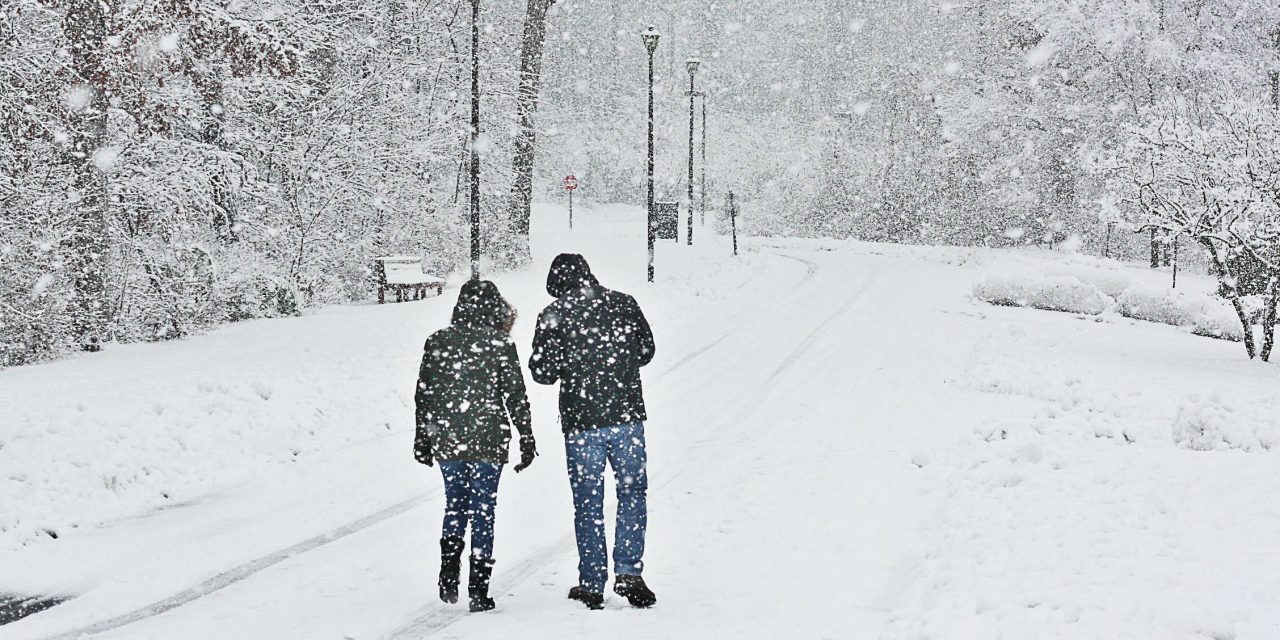 January of 2014 brought record-setting cold temperatures to Chapel Hill, NC, and the words “polar vortex” dominated the local lexicon for several weeks. Given that we are likely to experience these dramatic cold snaps more and more frequently here in the Southern Part of Heaven, I thought a column reviewing the science of the polar vortex was warranted. Further, if you will bear with me, I’d like to share with you why the behavior of the polar vortex reminds me of quantum physics.

Figure 1 below shows the normal air flow patterns and prevailing winds in the northern hemisphere: 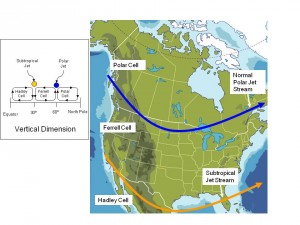 The box on the left shows a vertical cross-section of the atmosphere. Near the equator, warm air rises until, at high elevation, it turns northward until it reaches the latitude 30° N. At this point, it descends to the surface, turns to the south and flows back to the equator. Let’s call that circulation direction clockwise. The circulation pattern between the equator and 30º N is called the Hadley Cell. Between 30° and 60° N, there is a similar pattern called the Ferrell cell, but it flows counter-clockwise. Then between 60° N and the North Pole is the Polar cell, which again flows clockwise.

An important result of these northern hemisphere air flow patterns is the confinement of a mass of cold air near the arctic which is rotating in the same direction as the polar jet stream.  This rotating mass is the now famous polar vortex. To help you visualize it, see Figure 2. 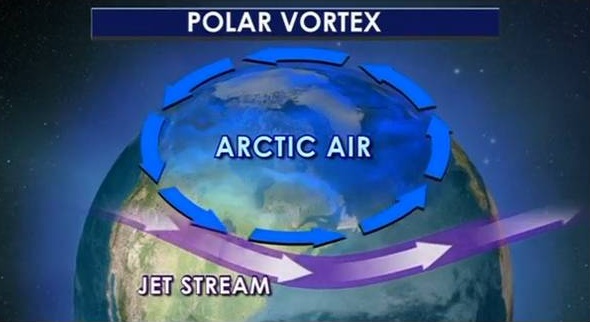 I will return to discussing the behavior of the polar vortex below, but first please allow me to set up that discussion with a brief aside on quantum physics. The simplest way to think about quantum physics is that electrons in an atom can only have particular amounts of energy. Further, try to recall from chemistry class that the amount of energy that an electron has determines which orbital it will occupy. An electron orbiting a nucleus can’t just absorb a small, arbitrary amount of energy such that it will move just a tiny bit farther from the nucleus. It needs to wait until just the proper amount of energy is provided and then it jumps from its current orbital to a higher energy orbital all at once. As a result, you will only ever find an electron in one of the orbitals, never in between. At some point later, the electron will release that amount of energy and fall back to its original orbital. This behavior of electrons explains everything from the colors of the rainbow to why an X-ray machine works.

Now let’s think about the Earth as an atom, with the planet itself as the nucleus and the wind patterns as orbitals. When everything is normal, the polar jet stream follows the blue line, the lowest energy orbital, on Figure 1. Initially, as Global Warming adds heat (energy) to the air in the polar vortex, nothing happens. Then, when just the proper amount of energy is supplied, the polar jet stream snaps from following the blue line to following the purple line (a higher energy orbital), called the amplified polar jet stream, shown below on Figure 3.  Then at some time in the future, energy will be lost from the system and the jet stream will “snap back” to it normal state.  If your mind works like mine (and perhaps you may be thankful if it does not), this behavior will make you think about an electron jumping between orbitals in an atom. 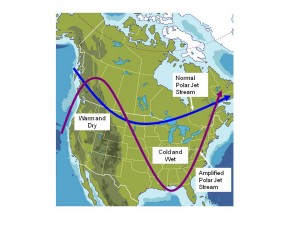 Whether or not you find the quantum physics analogy compelling, the behavior of the polar vortex can make rapid and significant changes in regional weather. As shown on Figure 3, when the polar jet stream is in the amplified state, the southeastern U.S. gets abnormally cold and wet weather like we had last January, and the pacific northwest gets warm and dry weather.

In addition to being an interesting scientific phenomenon, changes in the behavior of the polar vortex have noteworthy and potentially damaging implications. As the arctic continues to warm, the polar jet stream will snap to the amplified state more frequently. The attendant changes in both temperature and precipitation patterns will be highly disruptive to both natural ecosystems and agricultural operations. When climate scientists use the term “rapid climate change,” this is just the sort of phenomena to which they are referring. So I am sorry to say that more mornings where the temperature is 8°F are in our future.