Twice a year I head to my home town of State College, Pennsylvania to give a presentation to freshmen Chemical Engineering students at Penn State University entitled, “What a Chemical Engineer Actually Does.” It’s a fun trip for me. I listen to an audio book on the drive, visit with my parents while my mom makes my favorite foods, and engage in my hobby of giving advice to young engineers. At the end of my lecture, I try to impress upon the students that once they are working at a manufacturing facility, they will be entrusted with protecting the safety of others. I attempt to drive that point home by giving a brief lesson on the dangers of oxygen-deficient atmospheres. While you, my dear reader, are less likely to encounter an oxygen-deficient atmosphere than a chemical plant operator, it is a risk you want to be cognizant of, and you may find the science involved to be interesting.

We need to start with some background on lungs. Lungs extract oxygen from the air, transfer it into the blood stream, and allow carbon dioxide from the blood to be expelled out of the body. The average human lung has a functional volume of 3.5 liters when expanded and 3.0 liters after exhaling. By the difference in these two numbers, you see that the average volume of a breath is 0.5 liters. Therefore, each breath cycle, an inhale and an exhale, exchanges 14% (0.5/3.5) of the air in the lungs. The average human at rest breaths every 4 seconds.   The compositions of air and human exhalations are shown in the table below. 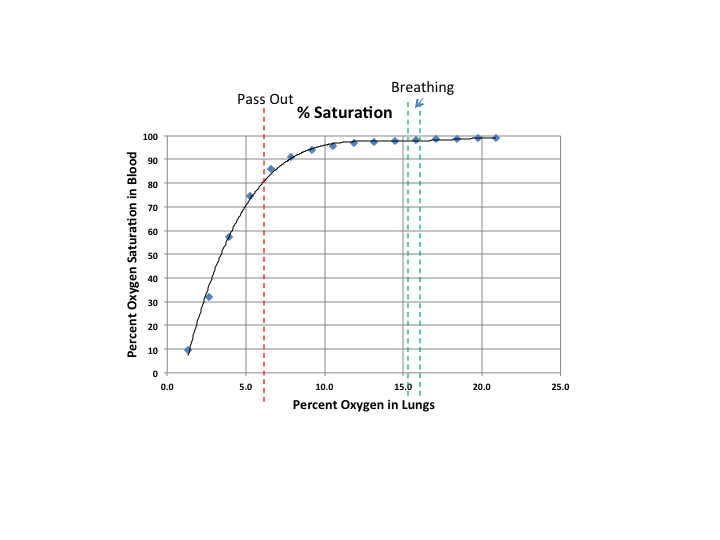 As you would expect, when you have more oxygen in your lungs you end up with more oxygen in your blood. In the ideal case, blood exiting your lungs will be nearly saturated with oxygen. What saturation means is that each hemoglobin molecule in each red blood cell picks up an oxygen molecule on its way through. You can see from the graph that in the normal breathing zone of 15.3-16.1% oxygen in the lungs, the blood reaches approximately 99% saturation. If, for some reason, the oxygen concentration in your lungs were to fall to 10%, your blood would still be 95% saturated, a level at which you would experience some discomfort but not be at any immediate health risk. If the oxygen in your lungs falls to 7% and the corresponding blood saturation falls to 85%, you are likely to pass out and fall to the floor.

Now let’s consider what happens when you either hold your breath or walk into an atmosphere of pure nitrogen. (I selected a nitrogen atmosphere as my example of an oxygen deficient atmosphere because tanks and vessels with pure nitrogen atmospheres are common in chemical plants when it is necessary to exclude oxygen to prevent fires.) If you take a breath and then hold it, you start with 3.5 liters of gas in your lungs with an oxygen concentration of 16.1%. As your heart keeps pumping, your blood continues to extract oxygen from your lungs. After about 200 seconds, the concentration of oxygen in your lungs will fall to 7%, causing the oxygen saturation level in your blood to drop to 85%. At this point, you pass out, fall over, and start to breathe, so all is well.

Walking into a pure nitrogen atmosphere is immediately life threatening. The key reason behind this stems from the fact that since you are still inhaling and exhaling, you are exchanging 14% of the gases in your lungs with each breath. Walking through the math on one breath cycle makes this very clear. Let say that you have just finished exhaling and then step into a pure nitrogen atmosphere. At this point you have 3.0 liters of gas in your lungs with an oxygen concentration of 15.3%. So far, so good. Now you breathe in 0.5 liters of pure nitrogen that dilutes the concentration of oxygen in your lungs to 13.1%. So after just a single inhale, you are well below normal levels of oxygen in your lungs. In addition to the dilution effect from breathing in pure nitrogen, just as in the holding your breath case, blood is continuing to remove oxygen from your lungs as it flow through. Over the next four breaths, the oxygen concentration in your lungs will drop to 10.8%, 9.0%, 7.5%, and 6.2%, respectively. Therefore, you are likely to pass out and fall down somewhere around breath four or five. Given that you are now immobilized and unconscious in an oxygen-deficient atmosphere, death will soon follow.

The graph below of lung-oxygen concentration as a function of time for normal breathing, holding your breath, and for being in an oxygen-free atmosphere clearly illustrates how dangerous this last scenario truly is. 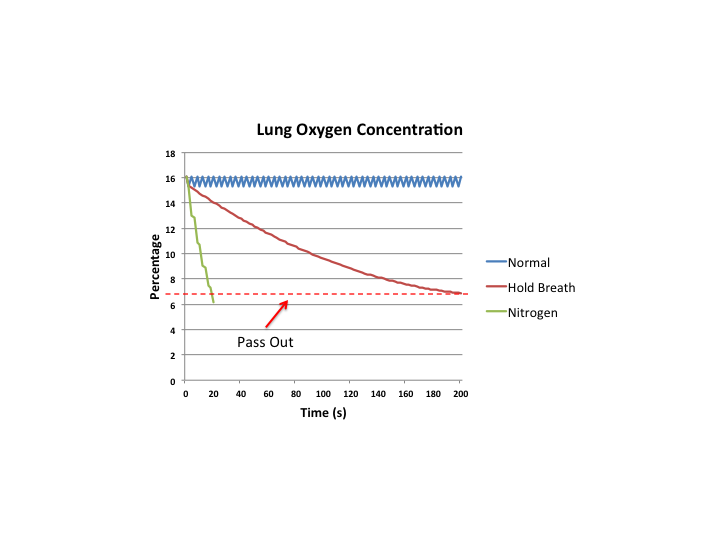 Areas and locations that have the potential to contain an oxygen-deficient atmosphere are usually labeled as “confined space” and “permit required for entry.” These labels have always struck me as rather non-specific and indirect for such a significant risk. I think something like “Oxygen Deficient Atmosphere” or “Risk of Suffocation” would be much better. When I finish my presentation at Penn State, I can never quite tell how the students have received the lesson, but is my hope that someday they will prevent someone from coming to harm based on my lecture. Now maybe you will too.

Jeff Danner talked about this column with Aaron Keck on WCHL Tuesday.