Michelle Morehouse sat at the front of the room, backed by a mural of children in flight, trying to hold the attention of five toddlers. Not an easy task.

“For my young friends, we have two rules at story time,” she said. “Number one, turn on your listening ears. And number two, have fun.”

It was a Monday morning, and her audience was children between the ages of 18 and 36 months and their mothers. It was Toddler Story Time at the Chatham Community Library in Pittsboro, one of the many weekly events the library branches hold in the area of early childhood literacy.

The 2019 State of the County Report stated that Chatham’s libraries hosted 234 early literacy programs during the 2018-2019 fiscal year, serving 6,357 children. That’s an average of 27 children per event ages birth to five. When tallying up those numbers, Youth Services Librarian Katy Henderson said she was “quite pleased.” 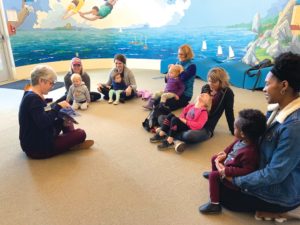 The library’s branches — one each in Pittsboro, Siler City and Goldston — hold seven story times for children 5 and under each week across the county. Planning those events, Henderson said, takes three months throughout the year. For instance, the current story time lineup runs through December 21, and staff will plan for the next 12-week session during January. Programs resume in February.

The various programs are designed, Henderson said, to help children who aren’t yet in school.

“We do see our programs as a way to engage with children who aren’t yet in any type of formal educational setting,” she said. “Our attendees are typically children who are at home during the day with a parent or other caregiver, but we do also have classes visit from local preschools and daycare facilities.”

Reaching those children with literacy skills prior to entering the classroom is a research-based approach to help prepare kids for school, Henderson said. She cited as “concerning news” the state of North Carolina’s student test scores in reading.

Earlier this fall, test results on the National Assessment of Educational Progress, a nationwide reading and math assessment for 4th and 8th grade students, revealed that North Carolina’s students have shown no progress since 2017, the last time the test was taken. The 4th-grade proficiency rate on the test dropped from 39 percent to 36 percent, which was described by NAEP as “not significantly different.” The N.C. Dept. of Public Instruction described the scores as the state “holding steady.” Most states and America as a whole saw decreased reading scores or no significant change.

It’s in this environment of reading scores that Chatham’s libraries hope to provide a head-start for these children, and ideally, a framework for parents to replicate at home. The four early literacy skills programs focus on, Henderson said, are reading, talking, singing and playing — writing is a fifth skill, but not a focus of the programs. But something else is most important.

“The centerpiece of any story time program is interaction between the presenter and the babies and children and their caregivers,” she said. “Youth Services library staff should be familiar with child development, and what each age group is capable of in terms of prior knowledge, gross motor skills, and attention span. We use what we know about each age group to design a story time that is age-appropriate and fun.”

For the Baby Rhyme Time, for ages “birth to 18 months,” staff focuses on songs, nursery rhymes and bouncing. But similar to the approach for all the programs, Baby Rhyme Time is about parents.

“We share a take-home sheet with the lyrics to the songs and rhymes used in the program, so they can repeat them at home,” Henderson said. “We build in time at the end for the babies to play with a variety of toys, and for parents to get to know each other and share their experiences as parents of babies.”

Toddler Time and Preschool Story Time include stories, songs and dances as well as flannelboard stories. Built in, Henderson said, are literacy benchmarks like counting to 10, learning colors and shapes and recognizing letters of the alphabet.

During last week’s Toddler Time, Morehouse did songs, dances, books and helped the children “dress” a flannel man with some flannel clothes on a flannelboard. She said that at Toddler Time the goal is “all those pre-literacy skills” as well as the social aspect.

“A lot of it just social,” she said. “A lot of our baby and toddler time is about modeling for parents those pre-literacy skills. I try to do as much participatory activities with them as possible.”

And at the end, they all got a hand stamp.

Rita van Duinen, the branch manager of the Pittsboro library branch, said these types of programs are “vital to the mission of public libraries” and in some cases are the “main focus” or “only type” of programming.

And Henderson said that staff loves to do it.

“We are here to help instill a love of books and reading, and to promote literacy,” she said. “Everyone is welcome, and we are always happy to see both new and familiar faces in our programs. Our Youth Services staff are happy to help parents and caregivers find the right books to borrow and share with their children.”