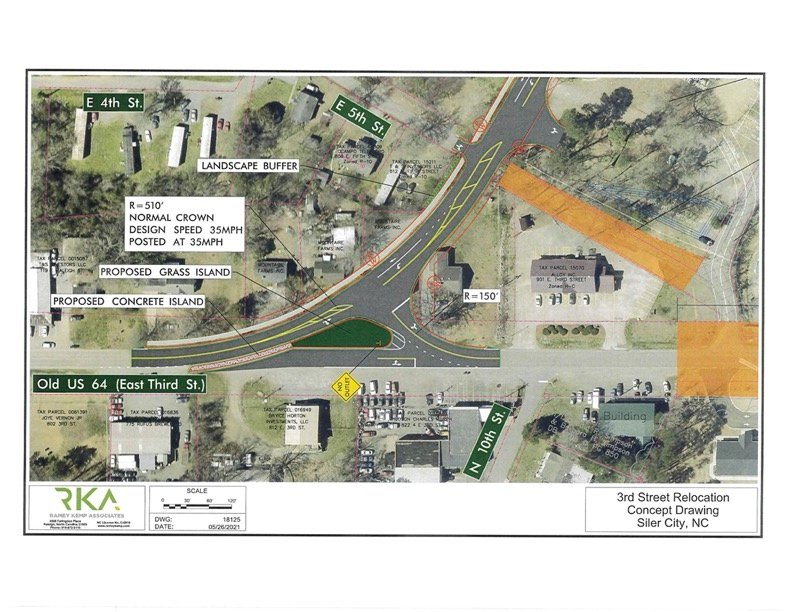 Town officials and the public will get to view an animated virtual presentation Monday illustrating proposed construction plans for a re-routed East Third Street which Mountaire Farms hopes to build as part of a $6 million roads project — to be paid for by Mountaire.

It’ll come as part of a public hearing scheduled for 6:30 p.m. Monday in the auditorium of Jordan-Matthews High School. In its formal petition to Siler City’s board of commissioners, Mountaire is requesting closure of parts of East Third and East Fifth streets and all of Johnson Avenue as part of the project; re-routing a portion of East Third is included in the request. Town staff is seeking the board’s direction about the proposal following the public hearing; the road project is awaiting approval or rejection from commissioners and the North Carolina Dept. of Transportation.

Mountaire’s president, Phillip Pylar, and other company officials will attend the meeting, during which residents will have the chance to provide input into the proposal.

Mountaire representatives shared the presentation with the News + Record and emphasized that while their petition to the town is officially listed as a road closure request, their plan is to reroute the downtown artery after constructing a higher-quality replacement.

The video to be shown at the presentation can be seen below.

This video was produced by Mountaire Farms and is a part of company’s Aug. 2 presentation to the community regarding its plans to re-route East Third Street. The video was made available to the Chatham News + Record (for which the Youtube creator, Hannah McClellan, works for) ahead of the presentation, and is shared with Mountaire’s permission.

“We think it will be the nicest road in all of Siler City when it’s done,” Cathy Bassett, Mountaire’s director of communications and community relations, said. “It will be a better, more thoughtful, safer road. And we’ll be using our own money to build it.”

The international poultry processor first submitted its request for a road closure in Oct. 2018 before construction of its $170 million, 255,000-square-foot facility began. Located at the corner of U.S. Hwy. 64 and East Third Street, the plant sits prominently along the primary access point to downtown Siler City. The company cites frequent poultry truck traffic, and the necessity for trucks to traverse Third Street as they load and unload — a potential danger to regular vehicles — as its motive for the road realignment. Future plans for plant expansion would also benefit from shifting the street.

“It became clear,” Bassett said, “that in order to ensure safety and maximize our footprint, we needed to reroute traffic.”

About 148 trucks per day enter and leave Mountaire’s property, according to Bassett.

According to Mountaire’s virtual rendering of the new road, East Third Street’s current terminus at U.S. Hwy. 64 would close to regular traffic and shift about 510 feet west, replacing North Avenue. East Fifth Street and Johnson Avenue — minor roads running through the Mountaire complex ­— would also close to the public.

“Those business will actually be more visible,” Bassett said. “I think they’ll see a boost.”

Over the years, business owners along Third Street have had mixed reactions to Mountaire’s proposal, though few would have their businesses directly affected by the road’s new trajectory. But the general response has improved since Mountaire produced concrete renderings in recent months.

“I think it will be only good for all these businesses up here,” Butch Hudson, owner of Preferred Insurance on Third Street and a member of the town’s planning board, told the News + Record. Hudson’s building sits almost directly across from the mouth of the proposed road.

“My business would be one of the most impacted,” he said, “but I think it’ll be good. (Drivers) will be looking right at us as they come down the new road.”

Hudson did not always support the proposed road realignment. For most of the past few years, he feared the shift might detour traffic away from Third Street businesses. But the rendering on a map of the area, which Mountaire previously shared with some business owners, made the difference.

“We just hadn’t known what to expect,” he said. “They didn’t give us anything to see. Now that we actually have a picture, I think we can all feel better about it.”

In the last two and a half years, Bassett and other Mountaire staff have brought the company’s proposal before the town board of commissioners about 10 times. A company timeline lists more than 40 total interactions between Mountaire representatives, the Town of Siler City and NCDOT, which holds final authority over what happens to the state-maintained road.

Aaron Moody, a public relations officer with the NCDOT, told the News + Record that if the town approves a proposal to reroute East Third Street, the agency would likely support the move “so long as required traffic improvements are made and they are up to current safety and design standards.”

“We would be working closely with the town and company/developer to ensure all the necessary steps were taken,” Moody said.

In a board of commissioners meeting last month, the long-stagnant project gained traction with town officials for the first time. After offering mostly favorable comments, board members scheduled a public hearing to be held at 6:30 p.m. on August 2 in the Jordan-Matthews High School auditorium for town residents to formalize their opinions on the potential road re-routing.

Unless additional community input convinces the commissioners that Mountaire’s proposal is contrary to the public’s best interest or the rights of nearby property owners, they will likely adopt an order at some point soon to permanently re-route the streets, after which the decision will be submitted to NCDOT.

But initial approval from the town and state will only begin another years-long process before a new road is complete.

“This project will take several years of approvals, design, engineering and construction,” Bassett said, “so it’s difficult to put an exact timetable on it.”

She emphasized, however, that construction would not force closure of the current East Third Street until its replacement was complete.

“The most feedback we’ve heard is, ‘Whatever you do, don’t close it before opening a new road,’” she said. “So that is absolutely our number one priority.”

And if residents can endure some years of construction, Bassett expects the community will appreciate the final product.

“Change is hard, we get that,” she said. “But this is a positive change that we think residents will really enjoy. And it will be a better gateway to downtown.”