One hundred years to the day after his murder, Eugene Daniel will finally get the remembrance he deserves.

Daniel was just a week past his 16th birthday when he was lynched on Sept. 18, 1921, by a group of Chatham County men. On this approaching Sept. 18, a week from Saturday, the Community Remembrance Coalition of Chatham County (CRC-C) will remember, honor and memorialize Daniel with two events that will focus on truth, justice and reconciliation — and honor the county’s Black history.

The first will be a soil collection ceremony and remembrance at New Hope Baptist Church — where Daniel is buried — beginning at 9 a.m. Later that afternoon, beginning at 2, a celebration of Black history in Chatham, as part of the county’s official 250th anniversary observance, will be held and feature a variety of speakers, including most of Chatham County’s state and federal legislative delegation.

Organizers from the CRC-C say that remembering Daniel, a Black man who was lynched not long after being kidnapped from the Pittsboro jail a century ago, is an appropriate step.

“Well, George Floyd was lynched before the world on camera,” said Mary Harris, a semi-retired Chatham County Schools teacher and administrator and member of the West Chatham NAACP in Siler City. “Breonna Taylor was killed in 2020 by police in a gun battle that gave the victims no chance to be treated justly. The six lynchings in Chatham County from 1884 to 1921 also denied their victims any justice, and no one was ever indicted, tried, convicted or imprisoned for these murders. It is important to acknowledge that it did happen; we cannot pretend or ignore our past or deny history.”

Acts of terrorism under the color of authority continue in the U.S., Harris said; knowing the history of lynchings and the consequences for Black Americans of those acts is key to knowing the truth of today and applying the remedies of equal justice.

Those elements, and the notion of reconciliation, are a part of the aim of the CRC-C. The group was formed about two years ago to “improve race relations, enhance comity, empathy and understanding across and within Chatham County’s races, faiths and communities,” according to its mission statement. The work of CRC-C encompasses a full accounting of the history of the county, as well as conversations with county leaders “dedicated to furthering community harmony.” 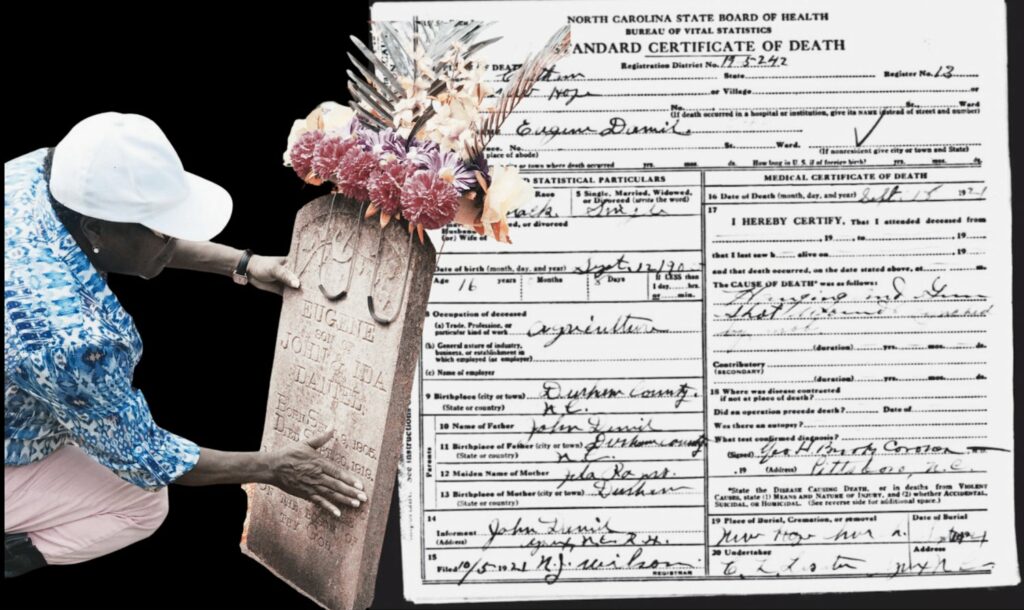 Mary Nettles brushes debris off the tombstone of Eugene Daniel. Daniel, the last of Chatham County’s six lynching victims, will be remembered on Sept. 18 — the 100th anniversary of his killing. (graphic by Hannah McClellan)

Another goal is to memorialize the lives of the county’s six lynching victims; Daniel, the last of those to die, will be the first to be formally remembered.

The actual site of Daniel’s execution is under water, near the site of the old Moore’s Bridge, east of Pittsboro, where Jordan Lake is now. Organizers collected soil from a nearby site in a recent private ceremony; that soil will be brought to New Hope Baptist Church on Sept. 18 as a part of a morning event that CRC-C President Mary Nettles said would include “singing, prayer and a release of the spirit.”

Some of the soil will be presented to surviving Daniel family members and the rest will be taken to the Equal Justice Initiative’s National Memorial for Peace and Justice in Montgomery, Alabama, as a part of EJI’s Community Soil Collection Project. EJI has identified more than 4,400 lynchings of Black people in the U.S. between 1877 and 1950, and staff and community volunteers have worked to gather soil at lynching sites for display in exhibits bearing victims’ names.

The Community Remembrance Coalition is also continuing to work on memorializing Daniel and the county’s other five lynching victims in some fashion. In Montgomery, the National Memorial for Peace and Justice uses sculpture to contextualize racial terror on a six-acre site; there, a memorial square with 800 six-foot corten steel monuments symbolizes the 800 counties in the U.S. where lynchings occurred, with names of the victims engraved on the columns.

CRC-C co-coordinator Bob Pearson — who first suggested memorializing the lynching victims more than three years ago — said the EJI memorial is designed in part to inspire communities across the nation to confront the truth of racial injustice and their own local histories.

“These events happened here, within a few miles of our homes and towns,” said Pearson, a career diplomat who retired in Chatham County with his wife Maggie in Fearrington Village. “Until recently, almost no one in Chatham even knew of these lynchings. They had been wiped from the histories of the county.”

A 200th anniversary book created in 1971 for Chatham County doesn’t mention the lynchings or the victims, Pearson said. There’s no reference to them in local museums.

“This history was not just forgotten, it was submerged and erased,” he said. “It was erased because it was so shameful, erased because these murders deserved official condemnation and received none … erased because the murderers, many known in the community, walked free for the rest of their lives.”

Those events are a part of Chatham’s history, and a part, former Chatham County Commissioner Dr. Carl Thompson Jr. says, of what formed the life and economy of the county for a century.

“And knowing them will help us understand better the reality of today in Chatham,” said Thompson, the senior pastor of the Word of Life Christian Outreach Center in Siler City and a CRC-C member. “Memorializing the victims with a historical marker will help us see more clearly what is required to go forward and remind us that such things must never be repeated. The marker will be a teachable moment for everyone who sees it.”

In addition, group member Ernest T. Parker said, the group wants to celebrate the many achievements of the Black community, “despite the challenges faced over the years.”

“We want the larger county community to know and appreciate how our fellow Black citizens have contributed to the county’s long history,” said Parker, a recently-retired U.S. Army colonel who moved back home to Chatham County after a 30-year military career. “We want them to know the stories of the families and understand the individual lives of people, largely unknown except within the Black community, who have enriched and elevated the county through the years.”

“Truth means acknowledgment of all our history, especially the difficult parts, so that we understand the need for change,” Pearson said. “Justice means putting into actual practice in our legal, economic, educational, and health systems those needed changes. Reconciliation means that as a result of these first two efforts, every one of every color in our community is moving toward the future with a common determination and view.”

Since forming, the CRC-C has been organizing virtual book discussions, presentations of choirs from the Chatham community and more. The group — which includes members from both of the county’s NAACP chapters and other interested citizens, and has about an equal number of whites and persons of color — is also planning a walking tour of Pittsboro and to create a mural celebrating Chatham’s Black history.

Thompson, one of the co-chairpersons of the Chatham 250 committee, said during early deliberations the group came to an awareness that past county celebrations didn’t include recognition of the history or the achievements of people of color in a significant way.

“To the credit and integrity of my colleagues, we all made a commitment to place a major emphasis on the inclusion of the history, cultural significance, and contributions of people of color in Chatham County,” Thompson said.

The Sept. 18 events will cap off those efforts.

“I believe that history, as presented factually, and not as a tool to manipulate the masses, induces a freedom of understanding of each other that can tear down walls of prejudice and hate,” Thompson said. “Our hope is that the more we all embrace the truth, this historical presentation, and future endeavors of this kind, will help to initiate the reconciliation and respect that mankind needs to live in peace and harmony in this world.”

Parker, who had been a toddler in Chatham, with generations of his family having lived here — his parents are graduates of the former Horton High School in Pittsboro — was unaware of the lynchings until getting involved in the CRC-C.

“Like many others in our community, I was familiar with a sanitized version of history,” he said. “One that minimized the contributions of people of color and did not speak truths that many people did not want to hear.”

Moving forward together in Chatham County means having an understanding together, Parker said.

“It was not possible to have the full protection of the law, the right to vote, to earn enough to build wealth, or to enjoy the same economic benefits available to whites,” he said. “It’s no accident that Black wealth today is about 1/10th that of whites. So we want acknowledgment by everyone of the terrible damage done in order to build the commitment by everyone to make the changes equal justice requires. That would have all of us, of whatever color, moving forward together. That is reconciliation, and that is our goal.”

The CRC-C isn’t set on changing history, Parker said, but rather to shine a light on our collective “hidden history” in order to understand it and learn from it.

“It takes courage, and it’s not easy, but think about what you will feel when you share a powerful truth with someone, and they get it,” he said. “They accept it. Their light bulb goes on. That’s why it is so important to stay rooted in facts and share what you know with others. That is what the events planned for Sept. 18 will help to accomplish.”

The six lynching victims in the years between 1885 and 1921 in Chatham County were Harriet Finch, Jerry Finch, Lee Tyson, John Pattishall, Henry Jones and Eugene Daniel. For more information from the University of North Carolina about the history of lynching in the state, go to http://lynching.web.unc.edu/